42 people were arrested on Sunday, 19 of whom were minors 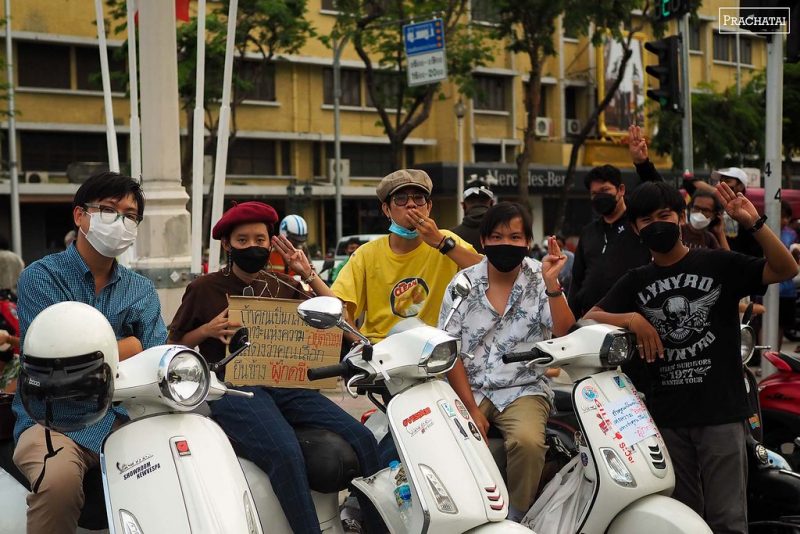 Protesters flashed the three-finger salute at an August 19 protest. One was also holding a placard saying “If you are neutral in situations of injustice, you have chosen the side of the oppressor.” Photo by Anna Lawattanatrakul / Prachatai

The original version of this article was published by Prachatai, an independent news site in Thailand, and was edited and republished by Global Voices under a content-sharing agreement.

The activist group Thalufah staged daily demonstrations from August 16–22 to protest the Thai government’s alleged mishandling of the COVID-19 pandemic, while demanding the resignation of Prime Minister Gen Prayut Chan-o-cha.

The protests continued throughout the week though the August 16 and August 17 protest marches were violently dispersed by crowd control police. On August 18, the group staged a protest at Bangkok's Democracy Monument — the first of their protests to conclude without being forcibly dispersed.

They returned to the Democracy Monument on August 19, for another demonstration, during which they wrapped the monument's model of a palm-leaf manuscript representing the Constitution in black cloth to convey the hopelessness of the situation. They also burned pictures of cabinet members, government MPs, and senators as a symbolic act of protest.

On August 20, Thalufah organized a protest caravan visiting three embassies across Bangkok to file petitions criticizing the COVID-19 vaccination program and Thai authorities’ use of violence against pro-democracy protesters.

The group first went to the Embassy of Switzerland to file a petition about the recent use of force to disperse pro-democracy protesters, which may have been in violation of the Geneva Conventions and other international laws. The group called on Switzerland, as a member of the International Committee of the Red Cross, to investigate Gen Prayut's government for possible Conventions violations.

They then went to the US Embassy to file a petition regarding the 1.5 million doses of Pfizer COVID-19 vaccines that the US government donated to Thailand. There were reports that military personnel received the vaccine ahead of medical workers, with frontline medical staff not receiving enough vaccines while non-medical personal appeared on lists of Pfizer vaccine recipients.

The group called for the US government to follow up on the Thai government’s allocation of the Pfizer vaccine to make sure the vaccines were allocated fairly, as well as to condemn the alleged vaccine corruption. 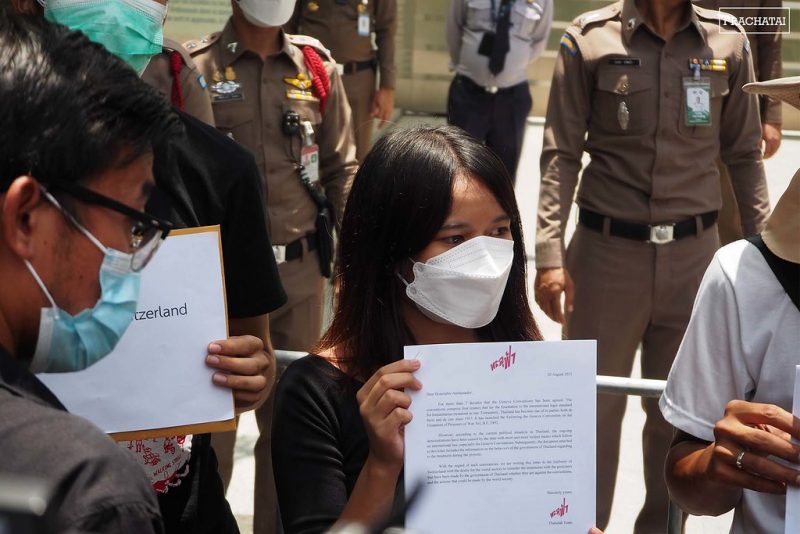 A group representative holding a copy of their petition in front of the Embassy of Switzerland. Photo by Anna Lawattanatrakul / Prachatai

Thalufah also went to the United Nations building on Saturday, August 21, to file a petition with the Office of the United Nations High Commissioner for Human Rights (OHCHR) calling for the OHCHR to investigate human rights violations in Thailand over the past year, especially within the judicial system. They also asked the UN to issue a letter to the Thai government raising concerns about these violations and calling on it to follow international principles. They hope the OHCHR will provide assistance to pro-democracy activists being detained pending trial on charges relating to the exercise of freedom of expression and the right to peacefully assemble. 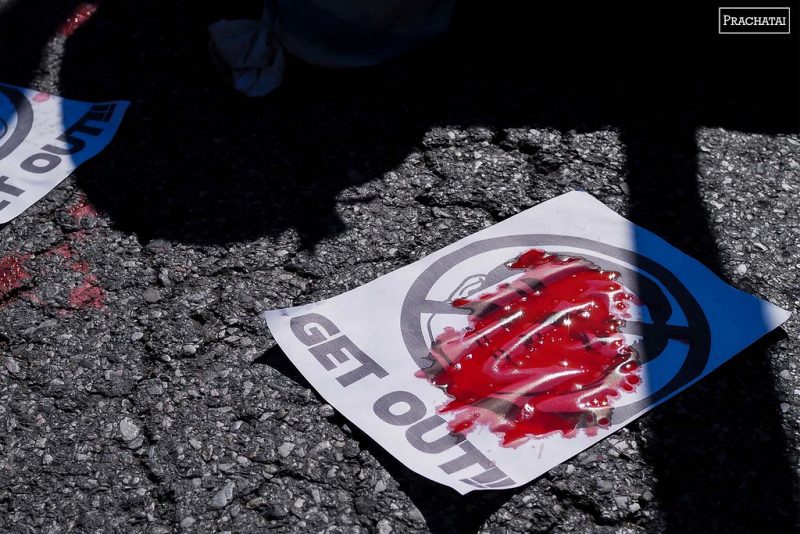 A poster with Gen Prayut's face was splattered with red paint and scattered around the Victory Monument before the 16 August protest march. Photo by Anna Lawattanatrakul / Prachatai

The protesters returned to the Democracy Monument on Sunday, August 22, with a sports-themed protest. The event began with a parade led by Thanat Thanakitamnuay, a former leader of the People’s Democratic Reform Committee (PDRC) who recently joined the pro-democracy movement, holding a sign saying “The people’s fraternity.”

Thanat lost vision in his right eye after he was injured during a clash between protesters and crowd control police at the Din Daeng intersection on August 13, after police fired a tear gas canister into his face. His family has vowed to pursue legal action against those responsible for his injuries. 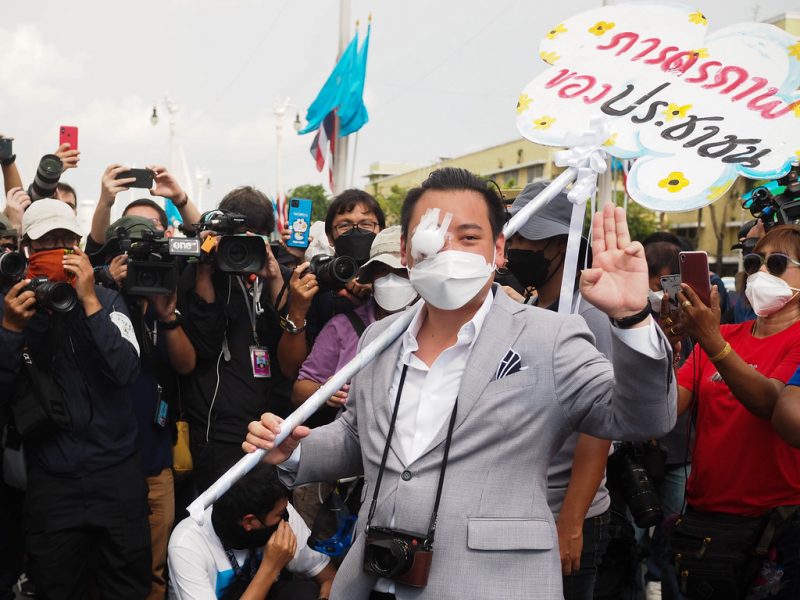 A series of speeches were given during the protest between various sporting events, including tug of war and futsal. A group of skateboarders also staged a performance while other protestors threw bags of paint at a vinyl banner with Gen Prayut’s face. 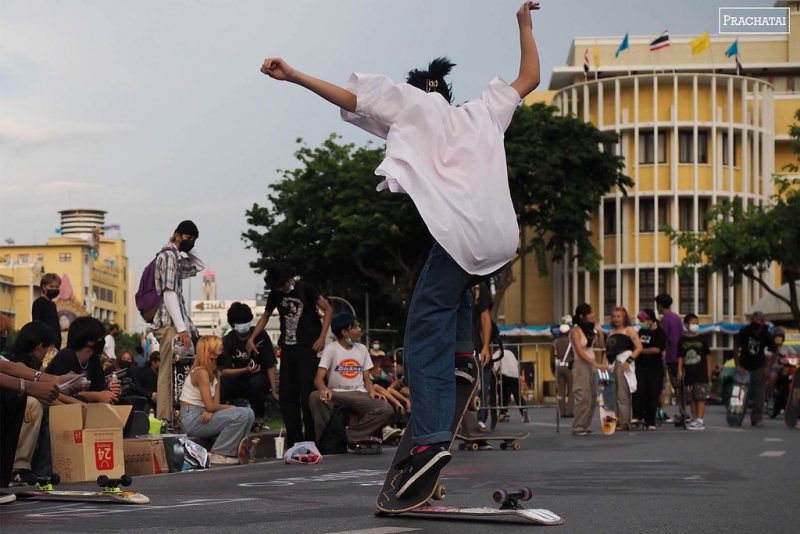 A protester skatboarding next to the Democracy Monument during the protest. Photo by Anna Lawattanatrakul / Prachatai

The protesters, most of whom were riding motorcycles, were trying to get past police barriers to the 1st Infantry Regiment headquarters to demand that Gen Prayut resign.

Crowd control police were also stationed in front of the Veterans General Hospital, along with two water cannon trucks. At 6:10 pm, the police forced the protesters to retreat by firing tear gas, rubber bullets, and water cannon blasts.

The Din Daeng intersection has been a site of daily clashes between protesters and crowd control police for the past week, as protesters repeatedly attempted to break through the police barriers to reach the 1st Infantry Regiment headquarters, where Gen Prayut lives.