'It is going to get worse before it gets better' 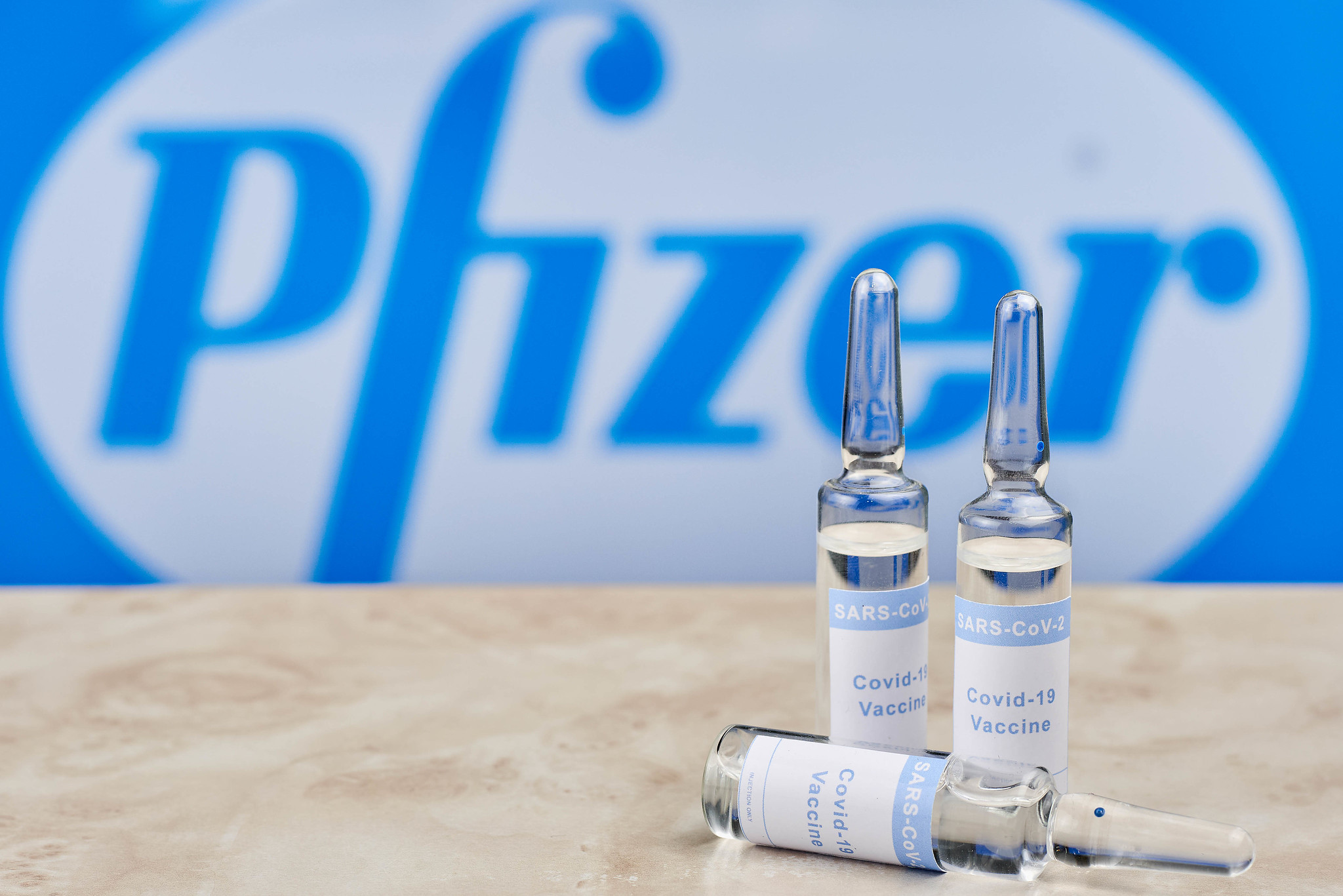 The Pfizer COVID-19 vaccine, a shipment of which arrived in Jamaica on August 19, 2021. Photo by Marco Verch Professional Photographer on Flickr, CC BY 2.0.

Jamaica’s struggle against COVID-19 and its Delta variant has been full of twists and turns. August 24, the third of a week-long “No Movement Day” restriction aimed at curbing a major surge in new infections, saw plenty of movement in and around vaccination centres in several rural areas, with the Ministry of Health and Wellness happily reporting that a record 21,000 doses had been administered.

Even before the presence of the Delta variant was confirmed on August 18, the number of new cases had been rising steeply, and now stand at 90 per cent of the peak on March 19. Currently, there is a daily average of 625 new infections. A portion of this spike was attributed to large entertainment events that were permitted over the Emancipation/Independence holidays in early August. By August 23, there were close to 14,000 active cases reported on the island, with 149 critically ill patients in hospital.

We are in our third wave of Covid-19 in Jamaica […] indicators are all going in the wrong direction, with our vaccination levels too low to have any significant collective impact on the effects of this wave […]

The report issued [with data from August 23, 2021] saw a record number of new cases being confirmed — 879, the highest single day total since the start of the pandemic.

Our hospitals and medical personnel are being overwhelmed […] it is going to get worse before it gets better. Actions taken now, by the government and the people, can help to reduce further infections and further deaths. But downplaying what’s happening, wishing it weren’t so or ignoring the science will not.

A shipment of the Pfizer vaccine, the first of three tranches donated by the United States, arrived in Jamaica on August 19, with rollout starting just two days later, on August 21. The 208,260 doses were earmarked for the 12 to 18 age group in the hope that they will be able to return to physical school by October. Though slow at first, uptake increased rapidly as COVID numbers reached record highs over the weekend, with some adults also being allowed to take the Pfizer vaccine.

In an effort to encourage the population to get vaccinated, Prime Minister Andrew Holness’ wife tweeted a family photo after their teenaged sons got the vaccine:

#GetVaxed
Our boy's received their first dose of the pfizer vaccine.
I encourage all parents to make use of the vaccination opportunity available to ensure our precious children are protected and vaccinated. Let's all play our role in this process. #DoTheRightThing#GetVaxed pic.twitter.com/88FiKvFWJF

The question of parental consent for their children to be vaccinated has also arisen. Since the age of consent in Jamaica is 16, one youth advocacy group suggested that anyone older should not require parental consent:

We are by no means advocating for the wanton vaccination of children without their parent's knowledge or involvement. However, by law children 16 and over can consent to medical procedures and we do not see a reason why that should not apply here. pic.twitter.com/vWpfKKevEd

#TalkbackTuesday: A youth advocacy group has called for teenagers 16 years and older to be allowed to get vaccinated without parental consent. Do you agree? #GLNRTalk

The push for vaccinations has gradually intensified, with bodies like the influential Private Sector Organisation of Jamaica mobilising its members to get their employees vaccinated:

Thank you @GruppoCampari for joining in efforts to get our productive sector fully vaccinated!#vaccinated#VaccinesWork#workwiddivaccine https://t.co/0DNVP8UWvL

Even the equally influential churches have come on board, participating in a webinar organised by the health ministry:

The Jamaica Council of Churches (JCC) subsequently issued a press release strongly supporting the vaccine drive—a huge breakthrough, given that religious concerns were identified as a principal reason for vaccine hesitancy among Jamaicans. Referring to science as “a gift from God,” the August 23 release concluded:

We therefore implore, beseech and encourage all Jamaicans who have not yet been vaccinated to do so as soon as it is possible, sparing no effort or cost. In addition, we encourage continued adherence to the long-established protocols […]

Our understanding of the sanctity of life demands that we work in personal and communal settings to preserve life and the quality of life.

Meanwhile, there were some logistical concerns during the vaccination effort, with complaints of overcrowding, some people being turned away, and at least one rural centre running out of vaccines.

There was some online discussion about Jamaicans’ heightened interest in the Pfizer vaccine as opposed to the AstraZeneca, which arrived in Jamaica on July 30 as a gift from the United Kingdom.

All my family members in America took the Pfizer, I was definitely waiting on it to hit jamaica, I knew it was a matter of time before the US sponsored us. Went to Merl Grove on Sunday and got through briefly, went Monday to bring my niece waited 4 hours, the place was ram packed

However, another suggested the rush to vaccination centres was sparked because Jamaicans are alarmed at the rising numbers of COVID-19 infections and continuous reports of overwhelmed medical facilities:

They weren't waiting on a specific vaccine, is because they see people dying in close range and seeing how flooded the hospital is.

Yet, at least one centre offering AstraZeneca seemed to be quieter:

Lol Mona Ageing and Wellness Centre is only doing Astrazeneca so they were EMPTYYY. Fight for Pfizer if you want but stop complaining, there's another option pic.twitter.com/JROkdhlhOT

Men's interest in the Pfizer vaccine, one columnist humorously suggested, might be piqued by the company's manufacture of another drug:

Honestly, at this point any positive spin that results in the skeptics getting vaxxed will be a win? pic.twitter.com/N0Z2uT8vW2

Whatever the motivation for getting “vaxxed”, the Jamaican government is keeping fingers crossed that the momentum of the record-breaking day will continue. With one of the lowest vaccination rates in Latin American and the Caribbean, it has a lot of catching up to do.