Ukraine: 30 years in pursuit of equality

How has Ukraine's independence impacted its citizens' prosperity and equality?

This article by Serhiy Guz originally appeared on Open Democracy and is republished as part of a content-sharing partnership, with minor edits to fit Global Voices style.

On August 24, Ukraine celebrated 30 years of independence with pomp. The government prepared lavish celebrations, including a parade through the centre of Kyiv, the capital. And for the past month, Ukrainian television has been broadcasting what can only be described as propaganda videos to mark the event.

But the real situation of assessing popular attitudes towards Ukraine’s independence is not as clear-cut as it might seem from the outside. In December 1991, as the Soviet Union began to disintegrate, 92 per cent of Ukrainian citizens voted for independence in a historic referendum. Yet in December 2020, only 68 per cent of citizens were ready to support it, according to survey data from the Razumkov Centre think tank and Kyiv International Institute of Sociology.

“Rational arguments played an important role in the campaign for independence on the eve of Ukraine’s 1991 referendum,” according to the Razumkov Centre. “The main motif of campaign materials [in 1991] was the idea that Ukraine produces much more than it consumes: to achieve a European standard of living, it would be enough for Ukraine to free itself from the networks of the Soviet Union.” 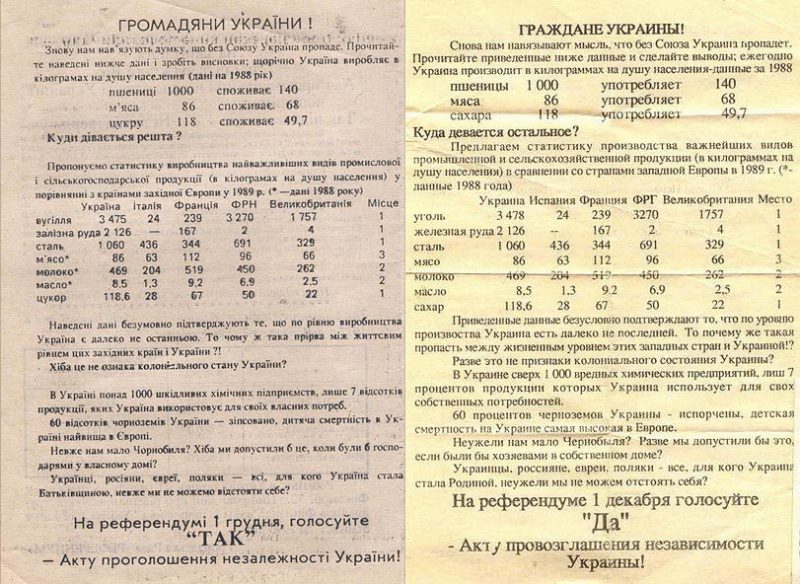 This prospect is reflected in leaflets distributed throughout Ukraine in 1991. When the statistics from the leaflet are compared with today’s data, it’s clear that the production of coal and sugar has fallen by five times, while production of steel and milk has halved, and production of iron ore and meat has fallen slightly less.

Behind the drop in these production indicators lies the cruel arithmetic of hundreds and thousands of closed mines, factories and workshops, large farms destroyed, millions of lost jobs.

Instead of the prosperity that was hoped for, Ukraine has experienced economic crises and social upheavals over and over again. This rollercoaster of crises means that the country does not have time to get out of one before another one crashes in—each time only managing to adapt to new conditions rather than recover. The collapse of the Soviet Union and the subsequent breakdown of production chains across the USSR led to completely different results to the ones Ukrainians were promised.

This is the reality after 30 years of liberal market reforms, the ruthless reduction of significant social guarantees like free medicine or education, which today are only “free” on paper. All these years, the Ukrainian authorities have been talking about radical reforms for the sake of the “middle class,” but only an insignificant minority of Ukrainians consider themselves to be part of this group.

Of course, these sorts of policies could only ever result in negative consequences. According to the Razumkov Centre, “the mobilisation of residents of southern and eastern Ukraine, disappointed with the ‘fruits of independence’, was part of Russia’s scenario of the ‘Russian spring’”—when Russia campaigned to whip up public opinion in support of separatism during Ukraine’s 2014 revolution and its aftermath. And these regional attitudes towards independence are still at play today.

Instead of initiating reforms to improve the lives of Ukraine’s poor, politicians and officials dismiss them as ‘biomass’ and ‘beggars’

But instead of initiating reforms to benefit the majority of Ukrainians who live poorly, politicians and officials offer offensive rhetoric describing citizens who are dissatisfied with reforms or who express nostalgia for better living conditions. These people are called “biomass” and “beggars” who are unable to build “even a doghouse,” or “Soviets” nostalgic for the USSR.

These people are stripped of their political voice through bans or attacks on left-wing political parties. Ukraine’s decommunisation laws, restrictions on the use of the Russian language, and extrajudicial bans on opposition media outlets accused of pro-Russian politics only add fuel to the fire of the disaffected.

The situation is no better in Ukraine’s trade unions, which are also under attack as authorities attempt to remove property they had inherited during the collapse of the USSR.

Ukraine’s trade union movement is split, disorganised and has long been unable to bring millions of its members to any meaningful protest actions, even when the Ukrainian government was trying to deprive the unions of their influence or developing new labour legislation that would cancel the last remaining social guarantees open to Ukrainian citizens.

As a result, the discontent of the poorest, but largest section of the country’s citizens, spills over into spontaneous protests, as was the case earlier this year during the “tariff riots,” when steep increases in energy costs brought people in towns and villages across Ukraine out to protest.

These protests are easily quashed by Ukrainian authorities as they are not supported by political demands. To suppress them, it is enough to temporarily deviate from market principles, for example, by prolonging the state regulation of tariffs for electricity or heating—as happened in response to the tariff protests.

This discontent is also fertile ground for various populist parties and projects, often backed by Ukrainian oligarchs. It was this discontent that brought President Volodymyr Zelenskyy and his Servant of the People party to power in 2019, when they promised Ukrainians “the end of the era of poverty.” Likewise, in 2014, Petro Poroshenko and his European Solidarity political party (then known as All-Ukrainian Solidarity Union) had come to power on the peaceful rhetoric of an early end to the war with Russia and an uncompromising fight against corruption.

We’re left with a paradox: no matter who wins the elections in independent Ukraine, instead of their promised restoration of social justice, governments pursue an increasingly tough course of economic liberalisation, simultaneously trying to neutralise their political opponents. And this path often finds support among the population.

According to a survey by Vox Populi Agency held in December 2019, one in five Ukrainians said they believed that authoritarianism was better than democracy. A third of the respondents did not see a difference between authoritarianism and democracy.

In February this year, 49 per cent of Ukrainians supported the closure of three opposition TV channels, which had been accused by the authorities of pro-Russian coverage. These channels—112 Ukraine, NewsOne and ZIK—were then closed, without any court order, by the National Security and Defense Council and a presidential decree. Previously, no president of Ukraine had dared to impose such extrajudicial sanctions on the media.

Polls show that Ukrainians fear authoritarianism from the current government. According to a poll by the Info Sapiens research agency in August 2021, 48 per cent of respondents said they considered government decisions that go against Ukraine’s constitution to be the main threat to the state over the next three years. In the same poll, one in four said they feared an excessive concentration of power in the hands of Zelenskyy.

Despite these fears and the falling support for independence, polls show that over the past 20 years, opposition to independence has also gone down. According to the Razumkov Centre, during this period the number of opponents of independence decreased from 29.2 per cent to 12.5.

Today, for the majority of Ukrainians, the concept of “Ukrainian independence”—and, above all, independence from Russia—has become an absolute value in itself. And this makes the prospect of giving it up impossible as long as the issue depends on Ukrainians themselves.

Yet the dreams of social and material wellbeing, justice and democracy that were at the heart of the 1991 referendum remain unfulfilled for many.

These dreams are likely to be drowned out again by propaganda or the next round of promises of a brighter future. After the fireworks clear, Ukrainians will still face the same problems that have remained unresolved for the past 30 years.