Authorities dispute the research methodology and the report's "political bias" 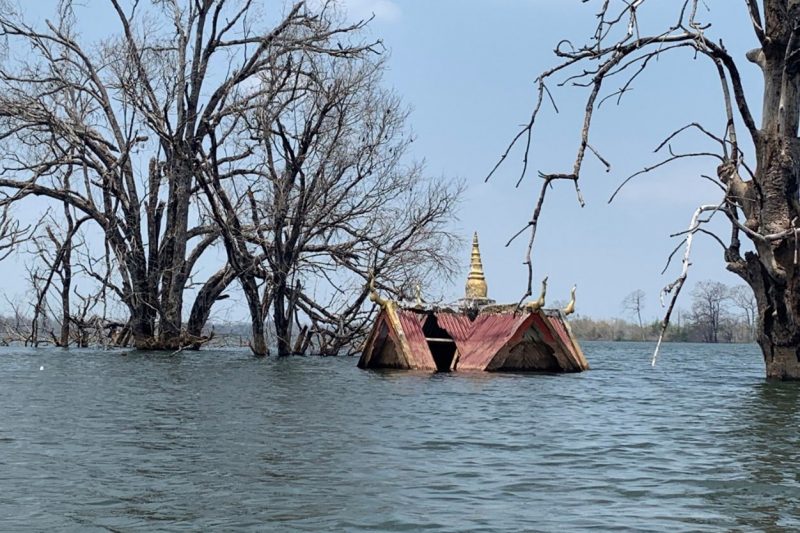 A former shrine in the village of Srekor, northeastern Cambodia, flooded after the Lower Sesan 2 hydroelectric dam was completed. © 2019 Human Rights Watch

A recent report by Human Rights Watch (HRW) has highlighted the negative social and environmental impact of the Lower Sesan 2 hydroelectric dam in northeastern Cambodia.

The dam, located in the Mekong River Basin, was built as part of China's Belt and Road Initiative (BRI) with a budget of approximately 800 million US dollars. It opened in 2018, and its main operator is China’s Huaneng Group.

The dam is a major BRI project in Cambodia, reflecting the close relationship between China and Cambodia's prime minister Hun Sen, who has ruled the country for more than three decades. Journalists in Cambodia said they have encountered difficulties accessing information about BRI projects.

The 137-page HRW report titled “Underwater: Human Rights Impacts of a China Belt and Road Project in Cambodia” was released on August 10, 2021. The research started in 2019 and involved interviews with more than 60 community members, civil society leaders, academics, scientists, and other project stakeholders.

The report states that around 4,500 to 5,000 houses belonging to villagers near Sesan and Srepok Rivers were submerged due to the dam. It identified Indigenous groups and other ethnic minorities affected by the project, including the Bunong, Brao, Kuoy, Lao, Jarai, Kreung, Kavet, Tampuan, and Kachok communities.

HRW said the Cambodian government and its Chinese partner have failed to provide safeguards or properly compensate residents who were forced to leave their communities. HRW quoted a Bunong villager saying:

The company didn’t consider Indigenous rights. They just told us to move. In the consultation, they determined things for us. They didn’t ask us what we want or need.

Today, everything the dammed-up rivers provided – food, water, an income from fishing – is gone.

…the compensation that was offered did not match the value of what they actually lost: fruit trees that were decades old, villages that they and their ancestors had lived in for generations, fields, graves, and religious shrines.

The Chinese-funded Lower Sesan 2 Dam in northeastern Cambodia has displaced thousands of indigenous and ethnic minority people and destroyed the livelihoods of many others, according to an Aug. 10 report by Human Rights Watch.

Responding to the HRW report, government spokesman Phay Siphan insisted that the dam is beneficial to Cambodians:

The development of Sesan 2 Dam is providing income to people. After moving, they got better houses and land than their old houses.

It supports the economy of Stung Treng province and country’s economy by generating electricity to serve the industry, enterprises and factories as a source of employment for the people in the province and as part of boosting the national economy.

Environment Ministry spokesman Neth Pheaktra emphasized that many Cambodians support the dam project because it addresses the country’s demand for renewable energy sources:

This is what Cambodians want but extremist human rights groups such as Human Rights Watch want Cambodians to continue using kerosene lamps in the 21st century.

Suos Yara, a member of the National Assembly, accused HRW of having “naked political bias, and dubious research methodology.” He wrote that the people interviewed by HRW do not represent the views of the majority of local residents affected by the project:

This sample size is too small and inadequate to be generalised in this kind of in-depth environmental study. Moreover, HRW failed to interview the vast majority of locals who have received fair compensation for their relocations and whose livelihoods have benefited from the construction of 12 schools, 12 kindergartens and numerous other public facilities created by the dam project.

His comments were republished by the Chinese state media outlet Global Times.

The response of Cambodian authorities was echoed by various agencies. Even the Cambodian Embassy in Turkey has released a statement about the HRW report:

In responding to Human Right Watch’s Report on Lower Sesan II Dam in Cambodia. #Statement of Spokesperson of the Royal Embassy of Cambodia in the Republic of Turkey, #13Aug2021 pic.twitter.com/QpJx80VK1d

Early reports about the dam

The HRW report confirmed what many groups and campaigners have been saying about the dam for many years. Residents and activists have been protesting about the project since 2017.

Environment news website Mongabay quoted 29-year-old Dam Samnang in 2017 about opposition against the dam in his community:

It provides no direct benefits to people in this community, it will destroy all our houses, and it will ruin the river system so that we can never come back.

Our ancestors are buried here and if they flood the area we will not be able to come back and visit them. I can’t put a (monetary) value on graves, but if the Prime Minister’s family graves have value, then why don’t ours?

This dam will be a disaster for us; our destiny is in trouble. They say they want to develop Cambodia, so why do they destroy our homes?

Phnom Penh Post newspaper published a report in 2017 quoting Srang Choeun, a villager in Kabal Romeas, about his family’s refusal to leave their land:

Now we live in Kabal Romeas collectively, we are united as a community by our common ownership of the land. But if we agree to relocate then we will accept private property, we will own land like the Khmer people.

Khmer refers to the ethnic majority in Cambodia.

Another villager, Kem Reoun, disclosed the harassment he and his community faced when threatened with displacement:

Authorities have been restricting villagers from their daily tasks, such as leaving the village to go to the market. In short, authorities do not allow people to leave the village. There are people guarding every gate, and they have dismantled a bridge.

There were reports about the hardships experienced by residents forced to leave their flooded ancestral lands two years after the dam completion. Even relocation sites were flooded, and settlers blamed the dam for causing a shortage of clean water.

Writer Horn Chanvoitey also probed the supposed benefits of the dam and the promises made by Cambodian officials to local communities.