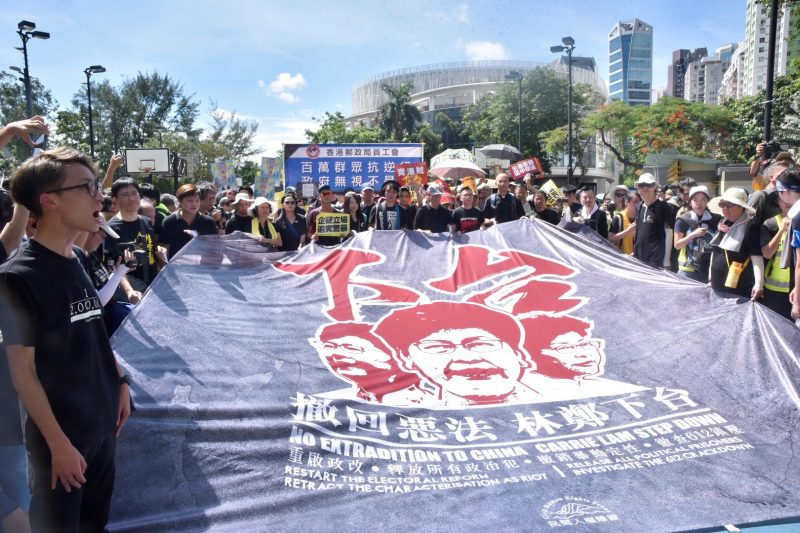 The 2019 July 1 rally. CHRF's protest banner callied for the Chief Executive Carrie Lam to step down. Image from inmediahk.net. Used with permission.

The following post is an English translation of a Chinese report published on Hong Kong-based CitizenNews on August 14, 2021. It is published on Global Voices under a content partnership agreement.

Civil Human Rights Front (CHRF), a coalition of pro-democracy political and citizen groups for the mobilisation of large-scale rallies, announced its disbandment on August 15, 2021.

Many anticipated the group would eventually dissolve when the Hong Kong Police Force started investigating the group in April 2021, citing national security concerns

Throughout its tenure, the umbrella organization frequently hosted major mass rallies in Hong Kong, including the 2019 anti-China extradition protests. Since its establishment in 2002, the Hong Kong police had collaborated with the group to ensure rallies were orderly, safe and peaceful. Yet, upon the enactment of the national security law (NSL) on June 30, 2020, the Police Force banned the CHRF's 2020 July 1 pro-democracy rally for the first time since the annual protests began in 2002, citing COVID-19 and security concerns. In May 2021 the coalition was flagged as an illegal entity.

CHRF has represented the rational, peaceful and moderate front of Hong Kong's civil society since its establishment. For 18 years, it served as a platform for civic groups to communicate and build consensus on common agendas for positive social change. Though no protests have been organised since the NSL was implemented, police vowed to investigate key figures of the group for potential national security infractions.

The Civil Human Rights Front was established in 2002 by Rose Wu, a veteran feminist and a faculty member at CUHK's School of Theology. The group hoped to provide a loose platform for civil groups to regularly discuss human rights and social justice. Eventually, more than 30 groups had joined the coalition, which was officially launched on September 13, 2002.

At that time, the most pressing issue in Hong Kong was the legislation of Basic Law Article 23 — a local version of the national security law. The CHRF hosted its first rally in December 2002 against the proposed law and unexpectedly drew 60,000 demonstrators — ten times more than anticipated.

On July 1, 2003, the CHRF organized its second rally against local national security legislation. Around 500,000 people turned out, making it the second-largest protest in the city since the mass rally against China’s crackdown on the Tiananmen student movement in 1989. The rally forced the Hong Kong government to halt the legislation.

Since then, July 1 rallies have become an annual event for citizens to voice out their discontent. As the rally host, the CHRF would decide on the annual agenda while other organisations and protesters would use the occasion to voice their demands.

Between 2005 and 2013, the agenda of the annual rally covered a wide range of issues including universal suffrage, minimum wage, environmental concern, property bubbles, the introduction of a national education curriculum and more. The turnout ranged from 21,000 to 430,000 depending on the political climate at the time.

In 2014, 510,000 people joined a rally demanding genuine universal suffrage of the Legislative Council and the Chief Executive. After the rally, two student activist groups, Hong Kong Federation of Student Unions and Scholarism staged a rehearsal of ‘Occupy Central Protests‘, a massive civil disobedience campaign that advocates for democratic election reform with no pre-screening for candidates according to international standards of universal suffrage. During the sit-in, 511 protesters were arrested.

Since then, many started to question the effectiveness of the annual ‘ritualistic’ peaceful rallies organized by the CHRF and called for more radical forms of protest and civil disobedience.

CHRF: The rational and peaceful front of Hong Kong protests

Civil engagement ebbed after the Occupy Central sit-in protests in 2014 failed to bring democratic changes in the city. As a large number of activists were arrested for participating in the peaceful sit-in, some protesters became sceptical of orderly, symbolic acts of protest in favour of more disruptive resistance. The number of participants in demonstrations dropped dramatically until February 2019 when the government introduced an amendment to the Extradition Bill or The Fugitive Offenders and Mutual Legal Assistance in Criminal Matters Legislation (Amendment) Bill 2019.

In response to the government decision to bypass the Bill Committee and submit the controversial bill directly to the Legislative Council for second reading on June 12, 2019, the CHRF organized the anti-China extradition rally on June 9. The government decided to proceed with the reading despite the 1 million demonstrators who had turned out against the bill. After the rally, some protesters clashed with police outside the Legislative Council.

On June 12, the CHRF hosted an authorized peaceful assembly at Lung Wui Road. On the same day, some protesters surrounded the Legislature and a few clashed with the riot police. The police force ended up firing tear gas, bean bag rounds and rubber bullets to disperse the protesters, including thousands of peaceful protesters at Lung Wui Road. At the end of the day, the police justified its actions by labelling the protest a riot, a crime that could lead to a maximum of 10 years imprisonment. The CHRF called for another rally on June 16.

Although the government announced on June 15 they would suspend the amendment to the extradition law, the police operation on June 12 had turned the single-issue protests into a city-wide political movement with five demands: the withdrawal of the fugitive law amendment, holding the police accountable for the violent clampdown on June 12, the release of the arrested protesters, changing the ‘riot’ label of the June 12 protests, and stepping down of the Chief Executive Carrie Lam. Over 2 million people turned out for the June 16 protest, which made headlines worldwide.

After the 2019 July 1 rally, which ended when a few dozen radical activists stormed the Legislative Council complex, the anti-China extradition movement evolved into a series of decentralised protests hosted by different activist groups. Very often, these protests ended in clashes between riot police and protesters.

In response to the violent clashes between riot police and demonstrators and between pro-Bejing and pro-democracy protesters such as the Yuen Long subway attack incident on July 21, the CHRF hosted a ‘be water assembly’ at Victoria Park on August 18, 2019, condemning the collusion between the police and the pro-Beijing mobs, more than 1,700,000 joined the protest.

The Hong Kong government and the pro-establishment groups condemned the CHRF and the pro-democracy political parties for not cutting ties with the radical protesters.

Since March 2021, when Singapore-based Chinese newspaper Lianhe Zaobao reported that the Hong Kong police had launched an investigation on the CHRF, many coalition members have cut ties with the group. One month later in April 2020, the Hong Kong police accused the CHRF of violating the Societies Ordinance for failing to register as a legal entity.  The last convenor of CHRF Figo Chan was sentenced to jail for participating in an illegal assembly on October 1, 2019. The umbrella group was left with no leadership.

The final disbandment of the CHRF was announced on August 15 through a statement:

CHRF originally hoped to continue to face the challenge with everyone in the existing ways, but convenor Figo Chan is already in jail because of several cases, and the secretariat can no longer maintain its operations. With no members participating in the next secretariat, we can only begrudgingly announce our disbandment.