Kazakhstan's history with Russian language and ethnic Russians is complicated 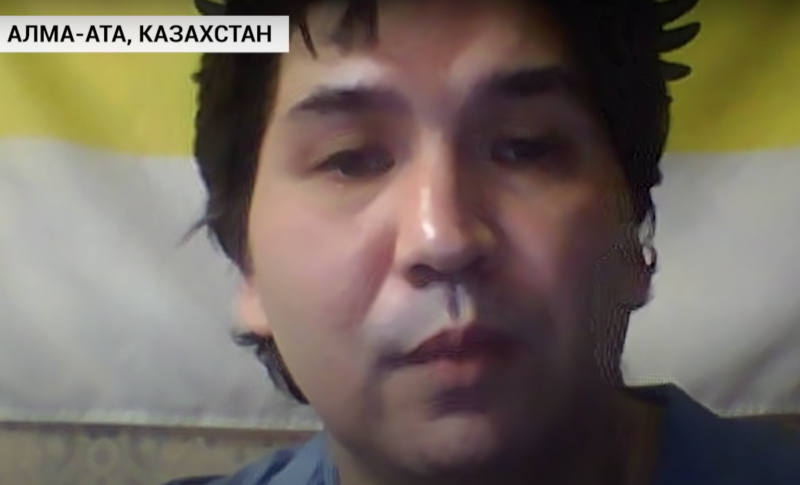 Yermek Taichibekov speaks in an interview to Ukraina.ru, a Russian state-funded media outlet. Screenshot from YouTube.

An Almaty court has sentenced Kazakh blogger and activist Yermek Taichibekov to seven years in a penal colony after finding him guilty of “inciting inter-ethnic strife” through the mass media (Article 174 of the Criminal Code of the Republic of Kazakhstan).

The pro-Russian blogger, who was detained in September 2020, claims his charges stem from a May 2020 video interview he gave to a Russian media outlet Ukraina.ru, which is part of the Russian state-funded media holding Russia Today (Rossiya Segodnya). In the interview, Taichibekov was commenting on the ongoing conflicts between ethnic Kazakhs and Dungans (a Muslim group with Chinese origins) in the Korday region of Kazakhstan's Jambyl Province.

The 2020 Kazakh-Dungan clashes in February 2020 resulted in damage to property and houses of over 4.44 million US dollars and the displacement of around 20,000 people to neighboring Kyrgyzstan.

Speaking in front of a black-yellow-white flag of the Russian empire (1858-1896), the blogger, known for publicly supporting the use of Russian language in the country, told the interviewer that Kazakhstan's authorities were conducting a “russophobic policy.”

According to Taichibekov, the Kazakh state has been “sourcing Russian individuals who speak out in favor of banning Russian television, banning Russian language, excluding it from the Constitution.” He also claimed that in Kazakhstan “everything is aimed at humiliating other nations.”

The blogger had previously been sentenced to four years behind bars for “inciting inter-ethnic hatred” through social media posts in 2015. At the time he did not plead guilty and called his sentence “politically motivated.” In 2017, he was released ahead of time.

Earlier in August, Yevgeny Primakov, head of the Russian Rossotrudnichestvo agency that assists ethnic Russians living abroad, criticized Kazakh authorities for “not denouncing the actions of local nationalists,” following reports of alleged nationalist-led raids on shops, with activists checking whether labels on goods had been translated into Kazakh and whether sales personnel were speaking Kazakh to  customers.

According to independent media outlet Eurasianet, the language patrols had been instigated by by Kostanay-based activist Kuat Akhmetov, who has inspired a fringe movement of Kazakhs demanding to be served in their native language. Videos of the raids appear on Akhmetov’s YouTube channel, Til Maydani (The Language Battleground), with some having over 20,000 views.

The incidents have also ignited the ire of Russian nationalist groups. Tsargrad TV, a far-right, pro-Kremlin channel, has called the patrols in Kazakhstan “russophobic,” likening them to Ukraine's nationalist movements that Russian authorities have used as one of the justifications for invading the country.

Responding to Russia's criticism in early August, Dauren Abayev, first deputy head of the Kazakh president's administration, called it “unfair” and said that the raids were “caveman nationalism” and “unacceptable and outrageous,” promising that law enforcement would be assessing these action “in a just manner.”

According to the Kazakh constitution, both Kazakh and Russian are official languages. Both are widely spoken in Kazakhstan, but Russian is more common in urban areas and in the north of the country, where ethnic Russians are often a majority. However, Kazakh authorities are mandated by the Constitution to  promote the use of the Kazakh language, which was relegated to second-tier status during the Soviet era.