Chinese investments in Nigeria flourish on a Silk Road of corruption

Chinese entrepreneurs in Nigeria give bribes to advance their investments. 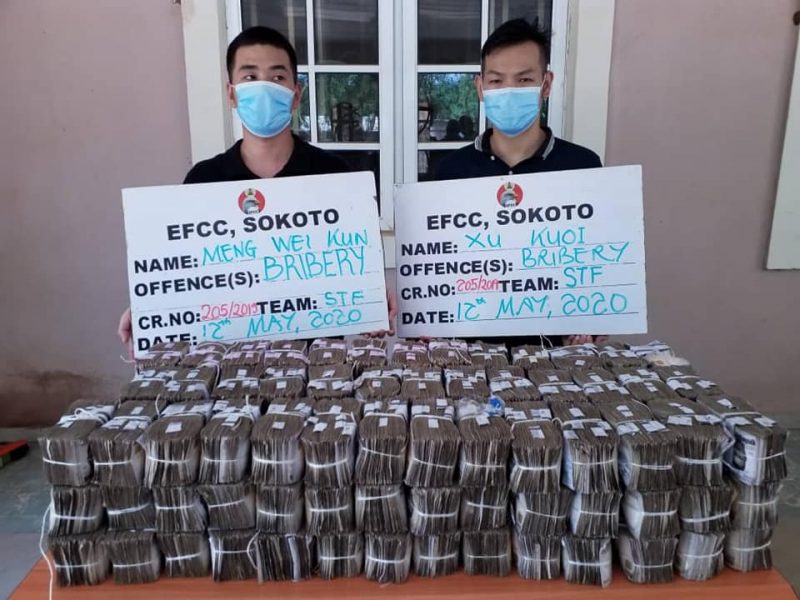 China’s bilateral relationship with Nigeria is usually framed by Chinese and Nigerian government officials as one built on trust, mutual understanding, and respect. However, this diplomatic language fails to capture a very different reality.

The Chinese government sometimes conceals the unethical and illegal efforts it makes to protect and nurture its numerous investments in Africa’s most populous country. This includes and is not limited to problematic practices like bribery by Chinese enterprises operating in Nigeria.

Nigerian President Muhammadu Buhari described, in a letter in February, the fifty-year-old China-Nigeria diplomatic relationship as built on “close coordination and mutual trust.” Chinese diplomats also tend to describe China-Nigeria relations using clichéd phrases such as “mutual respect, mutual trust, and mutual support” that is anchored on “multilateralism rather than unilateralism,” leading to “prosperity in solidarity” for both nations.

Nigeria was the first African country to be designated a “strategic partner” by China. “Most of China’s strategic partners (战略伙伴 关系/ Zhànlüè huǒbàn guānxì) are in Asia, where almost all China’s neighbours (with the notable exception of Japan) are designated as partners of some sort,” notes Dr. Steven F. Jackson, a professor of political science at Indiana University of Pennsylvania.

The bilateral relationship between Nigeria and China has ramped up trade from $1.9 billion US dollars in 2013 to about $20 billion USD in 2019. Abdul-Gafar Tobi Oshodi and Ufo Okeke Uzodike, two Nigerian political scientists, note that the “trade flows are in China's favour, with China running a trade surplus of about $17.5 billion USD for the years 2015 to 2018.”

Nigeria is also a key location for Chinese manufacturing firms to set up factories, with clusters located in southwestern cities of Lagos and Ogun, and in Benin City, in the oil-rich Niger-Delta region. It is difficult to track the actual number of Chinese firms operating in Nigeria, due to paucity of data.

I spent two months in Nigeria tracking and interviewing Chinese manufacturing firms to understand what brought them there, the challenges they faced, and their potential to promote skills and technology transfer to the local economy. https://t.co/VO5pU3UVcB

However, a 2020 policy brief by Yunnan Chen, a John Hopkins School of Advanced International Studies (SAIS) researcher, states that “China’s Ministry of Commerce, identified 218 Chinese firms registered in Nigeria, with 128 in manufacturing” as of 2015. , In 2017, the Nigerian Investment Promotion Commission showed that there were 157 Chinese firms registered in Nigeria, 24 of which are “listed under manufacturing,” according to Chen.

Multiple reports have revealed that these Chinese firms engage in corruption to carry out their business.

In April 2020, the African Development Bank (ADB) blacklisted China Zhonghao Nigeria Limited, a civil engineering company registered in Nigeria, from conducting business with the bank for eighteen months. The Chinese company and their local associates had engaged in “fraudulent practices” while bidding for an ADB financed project in Nigeria.

A year later, on July 30, 2021, two Chinese companies operating in Nigeria were “debarred and thus ineligible to participate in World Bank-financed contracts” for breaching their guidelines relating to fraud and corruption. The two companies are China Railway Construction (International) Nigeria Company Limited — which won a deal of $10 billion USD to construct a railway along the coast of Nigeria, and the China National Electric Engineering Company (CNEEC) Nigeria Limited — which is handling the construction of the 700MW hydroelectric Zungeru project, one of Africa’s biggest hydropower plants located in Kaduna River, Niger State, north central Nigeria, at an estimated cost of $1.3 billion USD.

The allegations of fraud by Chinese companies in Nigeria are not only limited to multinational agencies.

Chinese entrepreneurs in Nigeria are willing to give bribes to advance their investments, a practice that is as common in China as it is in Nigeria. “They’ve succeeded because they know how to use cash to get their way….They know how to bribe and are usually really ready, to [bribe] the police or government or anyone,” according to a Nigerian executive with close ties to the Chinese business community in an interview with Matthew T. Page, a non-resident scholar at the Carnegie Endowment for International Peace.

Essentially, it is an embrace between local corrupt politicians and equally fraudulent Chinese company officials.

Neither Oduah nor CCECC are newcomers to allegations of fraud or unethical financial deals.

On February 12, 2014, Oduah was fired as Minister of Aviation by then President Goodluck Jonathan following a corruption scandal over the purchase of armored cars worth 255 million naira ($510,000 USD). It was alleged that Oduah compelled the Nigeria Civil Aviation Authority (NCAA), an agency under her supervision, to purchase the cars at inflated prices for her personal use. Oduah denied the allegations, describing them as “inaccurate”.

Similarly, in 2020, Rotimi Amaechi, Nigeria’s transportation minister, announced that CCECC will be building a $50 million USD Transport University in Daura. “This is not a railway contract. This is a gift from them (CCECC),” said Amaechi. Daura, in northwestern Katsina State, is the home town of Muhammadu Buhari, Nigeria’s president. The unethical dimension of such a “gift” by CCECC is not lost on any discerning observer.

This is the complicated reality of Chinese/Nigerian relationships: a reality far from the simplistic mutual understanding narrative pushed by Chinese diplomats.