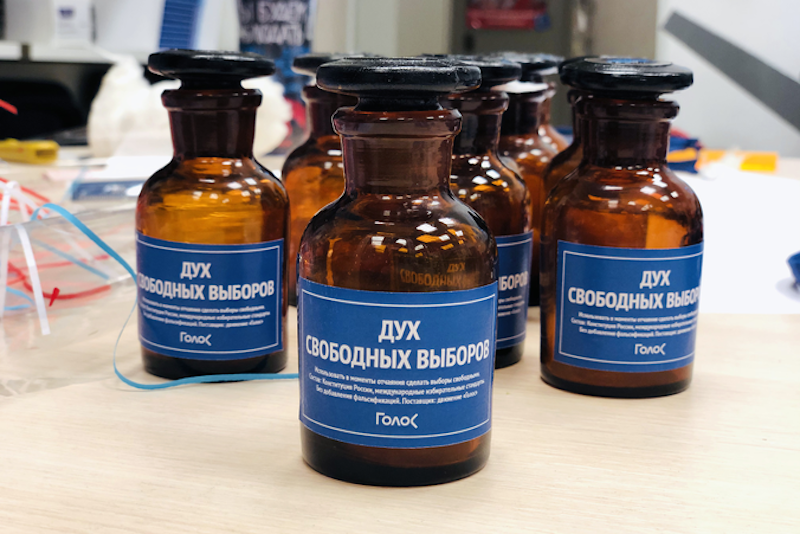 Promotional materials for Golos election monitoring movement – a bottle with the label “The spirit of free elections. Use in times of despair”. Image by Golosinfo.org [2], used with permission.

The Russian Justice Ministry designated the independent election monitoring group Golos [3] as a “foreign agent” on August 18, 2021. The new restrictions on the movement's election integrity work come a month before the parliamentary elections in Russia.

The designation has been applied to a number of non-profit organisations and media outlets in Russia in recent months, and requires organisations or individuals “involved in political activity” and deemed to be “receiving assistance from abroad” to register with the state or face [4] fines and, potentially, prison sentences. They are also required to regularly report on their activities and indicate their foreign agent status on any materials or content they distribute, including social media posts.

According to Interfax [5] news agency, Golos is the first informal movement to be added to the new “foreign agent” registry created in early 2021 for individuals and organisations that do not have legal entities in Russia. The new registry is run by the Justice Ministry, which also maintains two other “foreign agent” registries — one for registered NGOs and another for media outlets.

The “foreign agent” legislation [6], updated in December 2020, takes a broad view of what constitutes “political activity” in the interests of “foreign entities” or intermediary organisations “acting in the interests of foreign sources”. As noted [7] by independent media outlet Meduza,

The law’s definition of “political activity” is extremely broad. In particular, it includes election monitoring, social media posts about Russian politics, and taking part in rallies.

Golos joins a long list of entities and citizens dubbed as “foreign agents” in Russia: among them are news websites VTimes, Meduza and US-funded RFE/RL, investigative media projects such as The Insider [8], as well as individual journalists, human rights defenders [9] and activists [10]. Non-profit organisations such as women’s rights organization Nasiliyu.net [11] and rights group For Human Rights [12] are also on the list.

While media outlets and NGOs with the designation have either shut down their operations, seen their websites blocked [13] or had advertising revenues plummet, Golos’ addition to the list of foreign agents is especially worrying ahead of the September 2021 elections to the Russian State Duma (parliament).

The Golos voters’ rights movement emerged in 2013 after its precursor, the registered non-profit organisation Golos, was blacklisted [14] as a foreign agent by the Justice Ministry after it was awarded [15] the Sakharov Freedom Award by the Helsinki Committee. The legal entity was officially dissolved by courts in 2016, but the unofficial movement has continued to play a central role in observing the elections in Russia and ensuring integrity and transparency of the electoral process.

We have no doubt that the current attack on the largest community of independent election observers just a month before election day is an attempt to prevent Russian citizens from exercising that very right of observation, which the Russian Constitutional Court considered to be a guarantee of public recognition of the election results.

The monitor's concerns are far from baseless. In preparation for the September elections, fearing low voter turnout [17] and worried about the dropping ratings [18] of the ruling United Russia party, Russian election officials have restricted [19] video monitoring at polling stations, with only commission officials, candidates and parties granted access to live video feeds. Multiple independent candidates (banking on Alexey Navalny's Smart Voting initiative [20] that promotes running a single opposition candidate in election districts to deprive the United Russia party of votes) have been denied election registration under various pretexts, while others have been prosecuted and jailed [21].

For the first time since 2008, the OSCE said [22] it would not be able to send an international observation mission to the Duma elections after Russia severely restricted the number of observers, citing COVID-19 concerns.

Golos has vowed [16] to continue its work to train citizens as observers and commissioners at polling stations, and said it believes independent citizen observation is key to ensuring a transparent election:

What is happening now means one thing: the authorities understand that they will not be able to get the desired result in the elections honestly and are afraid of mass independent observation. Therefore, active citizens, in spite of everything, need to take the most active part in the elections of the State Duma deputies.