'Beijing can make ANY organization disappear by publishing a commentary' 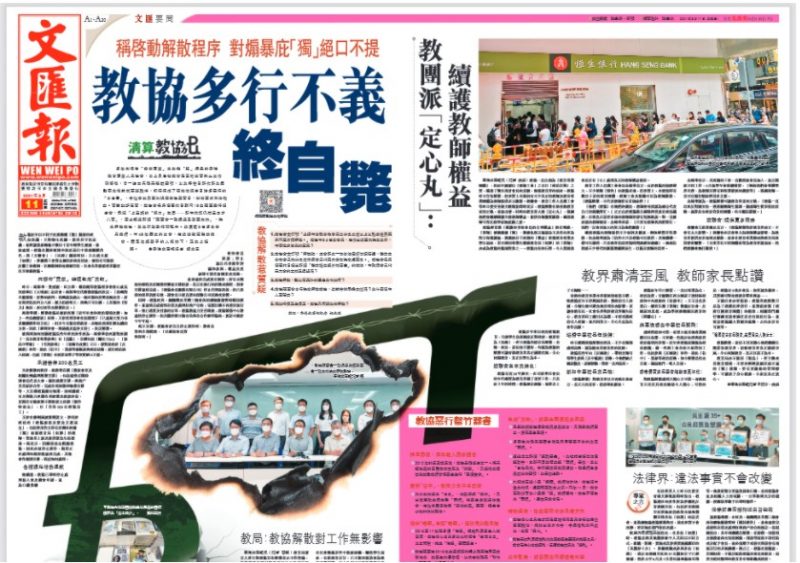 A screenshot of Wen Wei Po's front page after the HKPTU announced it would disband. The headline stated that the teachers union is responsible for its self-destruction. Via Hong Kong CitizenNews

The decision came after numerous attacks by Chinese state media. The news shocked the public as the union, with more than 95,000 members, represents at least 90 percent of the city’s educators and is considered one of the most moderate pro-democracy forces in Hong Kong. The incident signals that Beijing’s crackdown in Hong Kong is not confined to the political sector but extends to professional groups and workers unions — the foundation of Hong Kong’s civil society.

HKPTU was founded in 1972 by activist Szeto Wah had become an influential civic force in Hong Kong after it launched a teachers’ strike in response to a 15 percent salary cut in 1973.

Due to its moderate stand, the Hong Kong government has long considered HKPTU a close partner in developing the city’s education policy. However, the relationship soured after the anti-China extradition protests in 2019 as Beijing blamed the education sector for failing to cultivate patriotism in Hong Kong.

The new wave of attacks emerged last month as Chinese state-run People’s Daily and Xinhua slammed the teachers’ union as a ‘poisonous tumor’ that must be ‘eradicated’. The commentary ran on both state media outlets labeled the union as a political organization that incited students into taking violence act.  The accusations were then echoed by a large number of local pro-establishment media outlets and opinion leaders blaming the teachers’ union as a major source of anti-China, pro-Hong Kong independence sentiment. The next day, the Hong Kong Education Bureau announced that it would cut ties with the union, meaning the government authority would not have any interactions, including meetings, consultations or communication with the HKPTU.

To save the union, HKPTU issued a letter to all its members stressing that the group would focus on education professionalism in the future. It also withdrew from the Hong Kong Confederation of Trade Unions.

Even though top government advisor Ronny Tong assured citizens that there was no evidence the HKPTU had violated the national security law, the Commissioner of Police told state-run media Phoenix TV on August 5 that the police force would ‘definitely investigate’ any wrongdoings if national security matters were involved when he was asked about the union's status.

On August 10, the 48-year-old teachers’ union announced its disbandment after unofficial representatives from Beijing told them that the group ‘must cease to exist’ or it would face a similar fate as Apple Daily, which was shut down after the national security police froze its assets and arrested seven senior staff members, on charges of conspiring with a foreign force.

Even after the disbandment, state-run media outlets continue to advocate for a full investigation into the teachers’ union about potential national security breaches. One of the accusations presented by the Hong Kong-based Wen Wei Po is that the union had borrowed venues for polling stations during the 2020 primary elections among democrats. Forty-seven activists have been charged with conspiracy to subvert state power or running the primaries in July 2020 to choose the candidates who would contest the Legislative election in September.

Amnesty International highlighted the level of fear as reflected in HKPTU’s decision to self-dissolve:

The rapid demise of Hong Kong’s biggest teachers’ union in the face of increasing hostility from the Hong Kong and central Chinese governments illustrates the level of fear permeating the city’s education sector and wider civil society amid a relentless crackdown on dissent.

As pointed out by Hong Kong Twitterer Wong Kin Cheong, the crackdown on civil society is mobilized through Chinese state propaganda:

A point to note: The key issue here is NOT related to HKPTU's political stance or what it has done/plans to do.

What requires our attention is that this incident shows nowadays Beijing can make ANY organization disappear by “publishing a commentary” in People's Daily… https://t.co/Pc1bobbN7u

A commentary written by Ga Choi Tze on CitizenNews shared a similar view:

The CCP has adopted an all-around struggle policy in Hong Kong. You don’t have to do anything. Once it labels you as guilty, you are guilty. ‘The so-called rule of law, does not touch the baseline, only a small minority will be affected, etc.’ These are just lie for kids. Even cutting ties with other groups is useless. Even if you turn into a corpse, they will dig it out to whip you. Which red line has HKPTU has crossed? Do you call a union with 100,000 members a minority? All it took was a few words uttered by Xinhua and People Daily, then the Education Bureau acted accordingly. What is the legal basis? Since when did Xinhua and the People Daily become judges?

In May, a survey conducted by HKPTU indicated that about 40 percent of Hong Kong teachers want to leave the industry due to political pressure. The Union head Fung Wai Wah pointed out that the Education Bureau had been unfair in processing anonymous complaints targeting pro-democracy teachers, and it had ignored the education sector’s opinion regarding state-mandated curriculum changes. In addition, some pro-establishment legislators even called for surveillance cameras within classrooms. All these measures would generate great pressure for teachers.

Education is not the only professional sector facing political pressure. Since HKPTU announced its disbandment last week, a large number of commentators run by state-run media outlets have called for an investigation on the Hong Kong Confederation of Trade Unions (HKCTU) concerning its role in coordinating anti-government activities and alleged overseas funding sources. The commentators also noted strikes organized by the Hong Kong Cabin Crew Federation and Hospital Authority Employees Alliance during the anti-China extradition protests in 2019 and during the initial COVID-19 outbreak in 2020. Both professional unions are HKCTU’s members.

Journalists and lawyers are also targeted:

Some ExCo called as “Wicked” pic.twitter.com/kH9KLWCX03

PRC state media weighs in on upcoming HK Law Society elections & fires another shot at Bar Association: “People's Daily on Saturday warned HK's Law Society not to play with politics unless it wants to follow the fate of the HKBA & now-defunct PTU.”https://t.co/VnRVFtt0dy