China: Parents and teachers are divided amid crackdown on private tutoring

Some say the education sector has been scapegoated 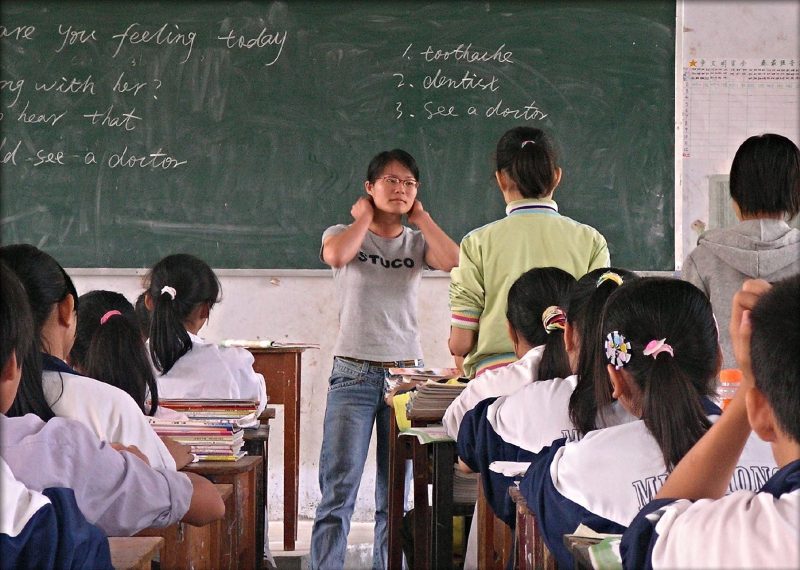 An image of a middle school classroom in China from Flickr user Rex Pe. Creative Commons (CC BY 2.0)

China is furthering its nationwide crackdown on the private education industry by encouraging citizens to report schools that host extracurricular tutoring classes as well as public school teachers who earn extra income through private tutoring.

The reporting system has stirred up debate on social media as reflected in a recent viral story about a parent's complaint about a teacher's private tutoring sessions.

According to the Weibo media outlet, Shenyang Headline News, a parent from Shenyang wanted her two twin children to get a good score on the high school entrance examination. An acquaintance connected the parent to a public school teacher who provided private physics tutoring to her children for RMB 100 yuan [about 15 US dollars] per student per class. Her kids attended 15 sessions and she paid the teacher a total of RMB 6,000 yuan for the supplementary course.

However, after her two children had been admitted into the target school, she reported the teacher to the authorities, accusing the teacher of breaking the new education regulations. She presented an audio recording of the private class and screenshots of the payment transfer as evidence. As a result, the teacher had to refund all the tutoring fees and pay an extra RMB 2000 yuan [308 US dollars] in exchange for a letter of understanding from the parent. The teacher might lose their teaching license if the authorities find the complaint is valid.

The story was originally circulated in a private chatroom by someone who claims to know the teacher. The exchange was screenshotted and republished by various online media outlets on August 9. Within 24 hours, the story had gone viral with a number of hashtags such as #MakeUpClassScam (#补课仙人跳#) and #TwinsReportTeacherOnMakeUpClass (#双胞胎补课却把老师举报#).

Many on social media were outraged by the parent’s acts. One Weibo user, ‘sheep’s life’, summed up the ethical issue in a few lines:

The parent took the initiative for the make-up class, she was the first to violate the rule

She reported to the teacher only after her children were admitted by the target school, she is like a scorpion stinging a frog upon crossing a river.

She blackmailed the teacher by taking the advantage of the education authority’s reporting system.

Upon receiving the extra RMB 2,000 yuan [308 US dollars], she did not retract her report as promised. Such a person has zero credibility.

A mother who is running a homeschool facility made a similar comment on Weibo:

How can such a selfish person be a parent? Such behavior is like persecuting someone who did you a favor. It is a betrayal of trust. Even if the teacher has violated the regulations, you should be the last one to report them. The teacher assisted your kids. Instead of being thankful, you trod on your morality just to get back the tuition fee… I suggest people stay away from such human beings. I will keep my kids away from this kind of human being.

This is not an isolated incident. China released a ‘double reduction’ education policy in July. The objective is to reduce parents’ expenses and students’ academic burden in both public and private education systems. Under the new policy, private tutoring businesses have to restructure as non-profits. They are banned from being listed on the stock market and prohibited from offer tutoring classes on weekends and school holidays. Public school teachers are prohibited from making extra income through private tutoring.

Yet, there is a strong demand for private tutoring in China as education resources are concentrated in a small number of prestigious schools which are mostly located in big cities. In addition, thanks to China's one-child policy, many mainland Chinese families are willing to spend a lot of money on their child’s education to pave their way to success. Regardless of the new education policy, many parents have continued looking for private tutors and some private schools have gone underground.

To ensure that the policy is fully enforced, the education authorities have encouraged parents and students to report practices that violate the policy guidelines. In some regions, the authorities have gone so far as to raid the underground private tutoring classrooms.  The following video showed a raid on an underground classroom in Hanshan County, Anhui province on August 5:

In the video, the teacher was dragged out of a classroom by law enforcement officials as if he was a criminal.

Guangdong province has received 161 complaints so far about institutions offering tutoring classes during the summer holidays or teachers accepting money or gifts for private tutoring. One complaint emerged after some students from a high school in Jiujiang city complained that their school had organized paid make-up classes during the summer holiday. The school principal explained that the classes were not compulsory and they were organized to meet parents’ demands.  He said that complaints were filed by students who did not enjoy attending school. Eventually, the school was forced to suspend the summer class.

The reporting system has strained the relationship between teachers and parents. Some criticized the parents in a comment thread of a news report about the Guangdong complaint hotline:

Can you provide a hotline for the public to report parents who bribe teachers with gifts — forcing them to take the gifts and then reporting them?

I also want to ask if the authorities can set up a hotline to report parents who snoop around for teachers to give private tutoring. Even though the teachers say no, they kept making phone calls late at night. Private tutoring involves two parties, why do they only punish the teachers?

But some insisted on blaming the teachers:

Don’t be a teacher if you feel its unjust. Don’t hurt our country's offspring by refusing to teach properly at schools so that you can earn the extra income outside schools. Teachers without a moral baseline are a disgrace to the profession.

People will love and respect you if you are a devoted teacher. If you withhold your knowledge in class to pave your way to earn extra income outside the classroom, you can’t call yourself a teacher.

A few pointed out that the education sector and teachers, in particular, has become a scapegoat for a series of policy failures:

People are unwilling to give birth to more children, the crackdown on property price cannot be too harsh, the cost of the health sector cannot be lowered. The only sector that they [the authorities] can tread on is education. They can unite [frustrated people] to bully the teachers. They dare not touch giant-baby-like parents. They just want to show their muscles by turning education into service.