Conservative groups target LGBTQ+ activists and artists across the country.

Feminist and LGBTQ+ activism in Kazakhstan is no easy task. Those who fight for their rights are constantly under pressure both from the government, which often fails to protect them, and from nationalist conservative groups, which are proliferating online and offline.

During their travels across Kazakhstan, Zhanar Sekerbayeva and Gulzada Serzhan, two spokespeople of the Feminita group, founded in 2015, have faced resistance at every stop. Feminita is a collective of LGBTQ+ activists that has repeatedly tried to register as an NGO, but had its applications rejected several times.

In May 2021, Sekerbayeva and Serzhan traveled to the southern city of Shymkent to organize a meeting to discuss queer rights. Despite arranging the logistics ahead of time, the activists were refused entry by the owner of the hotel where the conference would be held. As the disheartened group left the hotel to move the assembly into a nearby cafe, a group of conservative nationalists attacked them.

In the aftermath of the scuffle, police arrested Sekerbayeva and Serzhan “for their own safety” and brought them back to Almaty, the city where they reside, in a minivan the following day.

A similar angry mob met Sekerbayeva, Serzhan, and other activists during their visit to Karaganda, an industrial city in central Kazakhstan, on July 28. The police cordoned off the meeting place and brought the activists to the police station, where they were identified. None of the anti-LGBTQ+ protesters was questioned by the police.

Once the situation was calmer, the authorities sent Sekerbayeva and Serzhan to Almaty via train.

Both activists and anti-LGBTQ+ groups seem relentless in their efforts. On August 8, in the north-eastern city of Aktobe, more than 100 people gathered to protest another small event that Sekerbayeva and Serzhan were organizing for August 13.

Importantly, in Kazakhstan, the police generally disperse any rally that has not received approval by the city administration. In Karaganda and Aktobe, the authorities watched the rallies, but did not take action to disperse them.

On the same day, another anti-LGBTQ+ episode occurred, as parliament member and entrepreneur Kairat Kudaibergen launched a boycott campaign against Qańtar, an illustrator from Aktobe. Kudaibergen reposted one of Qańtar's drawings of same-sex subjects kissing while wearing traditional Kazakh garments. But his message was one of hatred, rather than support. 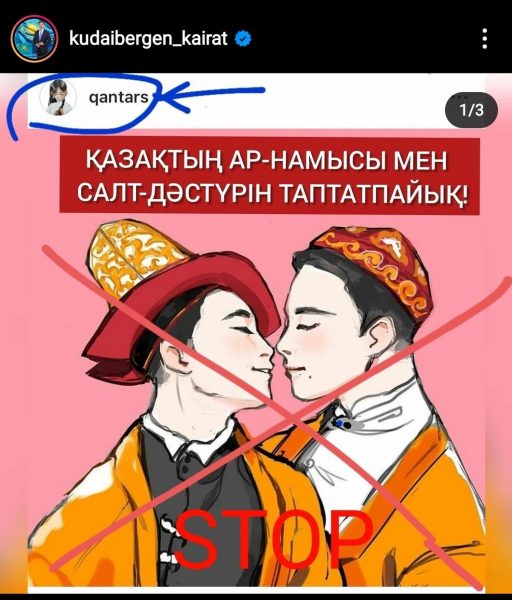 Screengrab from a deleted post on instagram by Kairat Kudaibergen, posted on August 8, 2021. Sent by Qańtar, used here with permission.

Let’s not let them trample on the honor and traditions of the Kazakh people! STOP

Qańtar flagged the issue and asked her supporters to report this bullying, which came from the same man who hailed an anti-LBGTQ+ action involving the popular Pop-It toy, in which one Kazakh blogger burned the widespread rainbow-colored toy because to him it symbolized “gay propaganda.”

Reached by Global Voices, Qańtar voiced her frustration and disappointment in the direct attack by Kudaibergen and the messages of hate that ensued after his post went viral.

There has always been homophobia. Now we are talking more about our rights and the homophobic masses don't like this. They want to return the time when we were completely silent and invisible.

When asked about her artwork, which had circulated in the past, Qańtar said that “it was just a sketch, not even fully developed art,” highlighting how just about any pretext would be used for attacks on the LGBTQ+ community.

As attacks multiply both on social media and on the streets, feminist activists have also managed to engender the idea that the struggle for equal rights can stir up support as well. The messages of solidarity that Qańtar, Sekerbayeva, and Serzhan received are a sign that the feminist discourse is taking root in Kazakhstan.