Bhutan has recorded only three deaths and 2,566 cases since the start of the pandemic 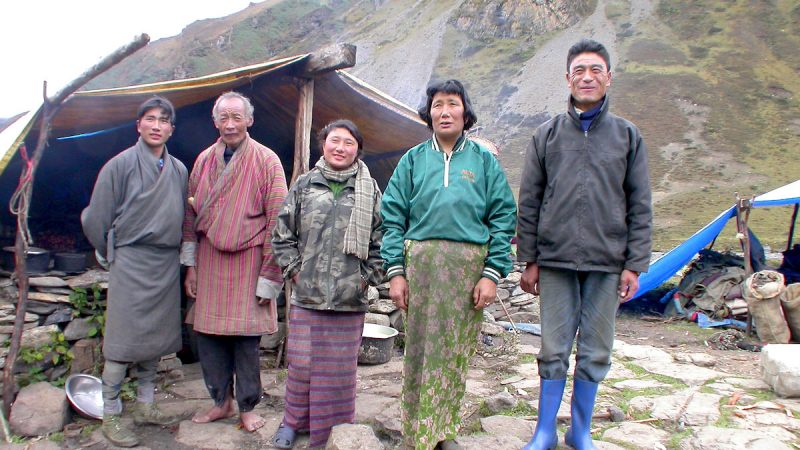 People of Bhutan. Image via Flickr by prbuckley1. CC BY 2.0.

The Kingdom of Bhutan, the tiny South Asian country in the Eastern Himalayas, has pulled off a rare feat: as of the end of July 2021, it had managed to administer two doses of COVID-19 vaccines to 90% of its adult population.

Compared with other countries in South Asia—such as India, Pakistan and Bangladesh—which are struggling to source vaccines and inoculate their massive populations, Bhutan has the advantage of a small population of only 780,910. The country has also managed the COVID-19 pandemic well compared to its neighbours and even helped Nepal by sending them 230,000 vaccines from its excess stock.

Bhutan's sound management of the pandemic despite limited resources is already being applauded as a “success story” and a “beacon of hope” for other countries in the region.

Bhutan's first case of COVID-19 was reported on March 6, 2020, when a US tourist tested positive. The country immediately put in place strict measures, including tracing 300 possible contacts of the tourist and quarantining them. The country banned tourists, closed schools and public institutions, postponed international conferences and took additional measures to prevent local transmission in high-risk areas.

The democratic government engaged in campaigns asking citizens to wear face masks, wash their hands, and practice physical distancing. Even the much-revered King Jigme Khesar Namgyel Wangchuck trekked by foot and on horseback to remote locations to oversee various mitigation measures, as journalist Tenzing Lamsang noted on Twitter in June:

This is his 14th or 15th trip since pandemic started.

Accompanied by PM this time. pic.twitter.com/bh2acXkSll

Bhutan had only around 350 doctors and 3,000 health workers when the pandemic started, and so far it has engaged around 30,000 citizen volunteers to help with different COVID-19 prevention measures.

A US$19 million relief fund provided some respite for more than 34,000 Bhutanese whose livelihoods were affected by the pandemic restrictions, and a country-wide registry for vulnerable citizens facilitated the provision of care packages to more than 51,000 Bhutanese over the age of 60.

The results have been exemplary, as the numbers attest: as of August 15, 2021, Bhutan has recorded only three deaths from COVID-19 and there are currently 32 active cases out of a total of 2,566 cases since the start of the pandemic.

But the country faced vaccine shortages after India banned the export of COVID-19 vaccines in late March. Reportedly, the deadline to give the second dose of AstraZeneca was within 12 weeks to 16 weeks of the first dose.

Bhutan engaged in diplomatic efforts to get vaccines from other sources, and in June, Prime Minister Lotay Tshering announced that the country was ready to mix and match COVID-19 vaccine doses to complete the vaccination of its population.

On July 12, 2021, the first batch of 500,000 Moderna vaccines from the United States through the COVAX program arrived in Bhutan. The country also received more than 350,000 AstraZeneca shots from Bulgaria, Croatia and Denmark, and 50,000 Sinopharm doses from China in July 2021. 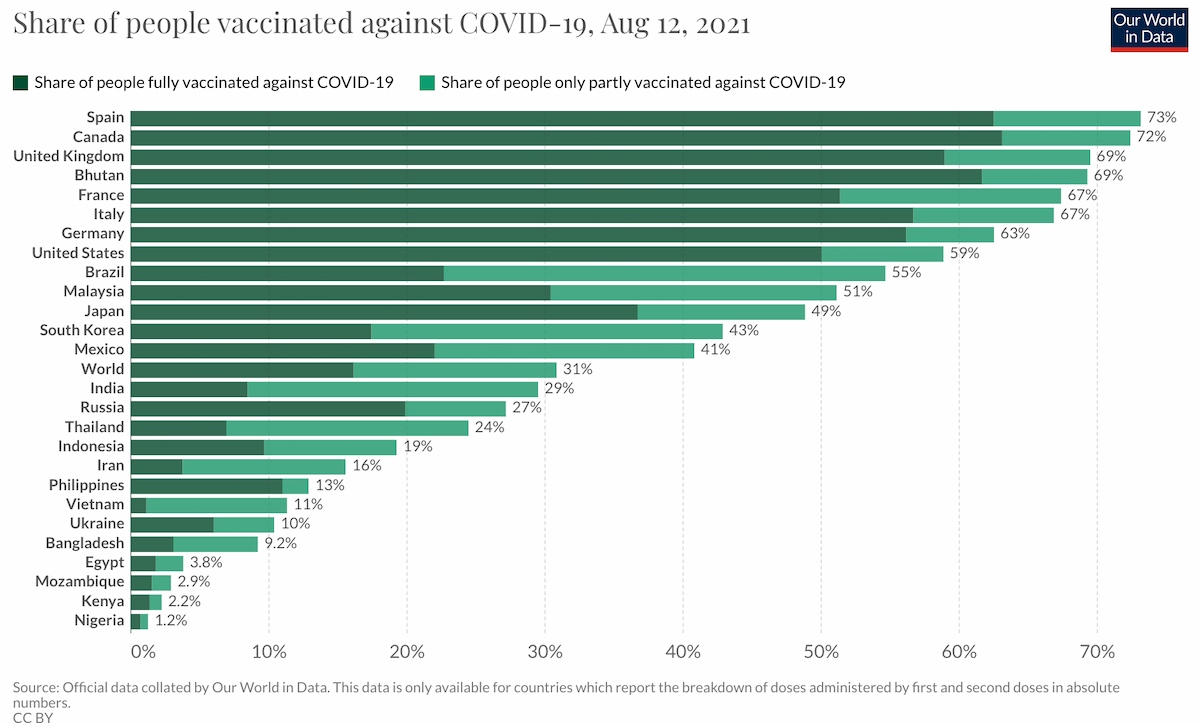 Chart by Our World In Data. CC-BY

Amazing turnout on Day 1 of national booster rollout at several vaccine centres in various districts including #Thimphu. This was not expected of Day 1, at least not at the centre I was at (Jigme Namgyal LSS).

Makes me happy & grateful as a citizen.

Another factor in Bhutan's successful vaccination campaign was the use of the Bhutan Vaccine System (BVS) developed by the country’s Ministry of Health with support from the UN Development Programme (UNDP). The digital system features an online registration system that generates vaccination schedules, monitors stocks, and produces real-time reports and vaccine certificates.

Chart by Our World in Data. CC BY

Bhutan's high altitude, the remoteness of some of its mountain villages, and its extreme weather make delivering vaccines across the country challenging. Namgay Zam observed that reaching those vaccination centers in remote locations was an amazing feat by the health workers:

Behind #Bhutan‘s successful vaccination campaign are a lot of unsung heroes like the three in this story.

Thank you to our frontliners who did this and will do this over the next few days. ?? https://t.co/VfDq3QfODx

#COVIDVaccination; Today across the country our 12-17 years old are getting their 1st dose of #Moderna vaccine through our school based program. Always a pleasure catching up with young minds. pic.twitter.com/Gy1nZUvEJr

After the success of inoculations in the country, Bhutan donated 230,000 shots of AstraZeneca vaccines to its neighbour Nepal, which had earlier sought vaccine support from Bhutan after learning about its excess stock. Only around 16% per cent of Nepal's 29 million residents has received the first dose of the Covid-19 vaccine, and only around 10% have been fully vaccinated.

Chhedup Sangay, a government employee from Bhutan, tweeted his approval of the donation:

I'm amazed. Love this one!

Bhutan sends 230,000 doses of the AstraZeneca vaccine to Nepal, today.

This is following a request from the Nepalese government seeking vaccine support from Bhutan. Bhutan has fully vaccinated more than 95 per cent of its eligible population.

230,000 may be a small number for Nepal, but it is HUGE for Bhutan. It is half of the vaccine eligible adult population of my country.

The success of the vaccination drive prompted Bhutan to reconsider opening for tourists. The country resumed issuing tourist visas from August 5, 2021, though the mandatory 21-days quarantine is still in effect.