The decline of Occitan: A failure of cultural initiatives, or abandonment by the state? 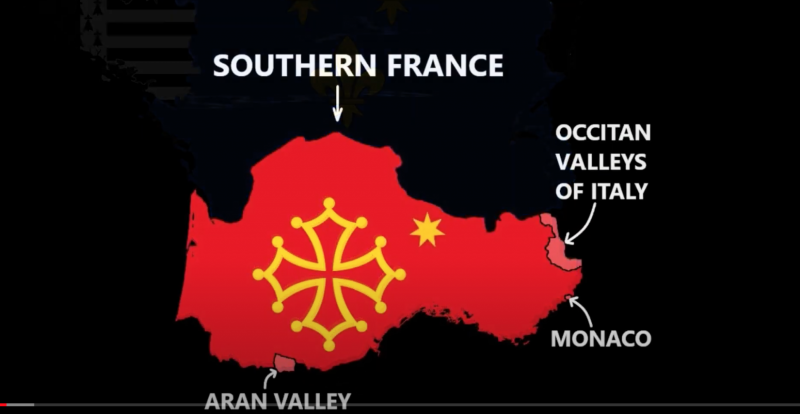 Screen capture from a video on YouTube explaining the history and current extent of the Occitan language.

Of the twenty-odd so-called regional languages spoken in metropolitan France, six are classed under the heading of Occitan or Langue d’Oc. Despite being spoken by over half a million people, and being supported by educational, media and cultural actions, Occitan is seeing a drop in the number of its speakers. Who's to blame?

Occitan (pronounced “outsita” in Occitan) derives its name from a division in the Romance languages descended from Latin based on the pronunciation of the word for “yes” (“oui” in modern French) along a line splitting France into two. To the north, ‘yes’ takes the form of the word “oïl” whereas to the south it becomes “oc”,  giving rise to the terms ‘langue d’oc’ et ‘Occitan’ which are also used to describe the geographical and cultural zone of Occitanie which represents the greater part of the south of France.

There is evidence of Occitan as a written language going back to the 10th century, and the language functioned as a literary, judicial and oral language until the 18th century. From the 19th century onwards, it becomes mainly a spoken language which remains the dominant language of the population of Occitanie, many of whom do not know French.

The number of Occitan speakers is subject to various interpretations, reflecting different definitions of the command and use of a language.

Today, the estimates vary: a language survey carried out in 2020 among 8,000 people over a wide area of Occitanie by the Office de la langue occitane,  a public body created in 2016 and covering 22 départements (French counties), indicates that on average 7 percent of the population speaks Occitan. This population represents more than half a million speakers.

Today, six principal varieties of Occitan are distinguished according to the region where they have most of their speakers: Gascon, Languedocien, Provençal, Auvergnat, Limousin and Vivaro-Alpin.

Outside France, two other countries recognise Occitan as a statutory regional official language: Spain in the region of the Val d’Aran, and Italy in the Occitan Valleys of Piedmont and Liguria. Monaco also reports 15 percent Occitan speakers.

In France, the average Occitan speaker is a man of 66 living in the countryside and using the language mainly within the family and among friends and neighbours. More details from this survey are available in this video on YouTube:

It is worth noting that no monolingual Occitan speakers are thought to remain. The speakers of the language can be divided into two categories: a population aged over 60 that speaks Occitan because the language has been transmitted through the family, and a second group, which could be described as Neo-Occitans, who are learning the language in Occitan-medium schools, and whose parents and family members do not always speak Occitan.

As far as school education is concerned, Occitanie contains several Occitan-medium schools called Calandreta. Occitan is also offered as an optional subject in schools and taught in the universities where it is possible to obtain a higher degree in Occitan language and culture.

At the level of the media, there exist the following: an Occitan-language television channel, OcTele; several radio stations, generally bilingual in Occitan and French, and a raft of regional information sites in Occitan. The role of the media is essential as it validates a language and contributes to its transmission to future generations by anchoring the language in modernity and digital culture.

Culture is a means on the one hand of conserving the heritage of the past, while, on the other, avoiding its reduction to folklore or museum exhibit. In this sense, the Occitan world has the advantage of several cultural institutions which play their part in the prestige of the language: literary academies like that of the Jeux Floraux which date from 1694, the Félibrige foundation which dates from 1854, the Permanent Congress of the Occitan Language, the Occitan Language Office already referred to, and Occitan publishers.

Some of these initiatives, like some media outlets, benefit from the financial support of the State, while others are private.

A language that remains under threat

All the above initiatives are positive and bear witness to a certain level of renewal, yet one fact remains incontestable: the number of speakers continues to fall. It doesn't seem that a lack of cultural initiatives is to blame.

The phenomenon of decline is of course related to the ageing of the traditional Occitan-speakers whose generation is gradually disappearing. But to reduce the problem to a purely demographic explanation would be simplistic.

In fact there are political factors that are just as vital. One of the principal reasons is the imposition of French, which has built up for three centuries the judicial arguments to prevent more extensive use of Occitan. Thus, as long ago as 1802, it was forbidden to speak anything other than French in a public school. This ban was later reinforced by punishments and maintained until the 1950s, at which point certain regional languages started to be taught.

The debate is far from being over; witness the latest polemic to date over the so-called Molac law of 2021 concerning ‘immersive’ (minority-language only) teaching in public schools as the state remains fiercely wedded to article 2 of the French Constitution which declares that “The language of the Republic is French.”

The regional language communities and their representatives — activists, and political and cultural figures — appeal in vain to the European Charter for Regional or Minority Languages; Paris refuses for the present to ratify the charter, despite having signed it.  This repeated suspicion of regional languages explains the difficulty in promoting an appreciation of Occitan in the younger generations and, especially, on a wider scale.

Thus, as Jean-Christophe Dourdet, a researcher in Occitan languages explains in an article from 2020:

The question of the revitalisation of languages is above all a sociolinguistic question. Rather than demand an official recognition of the languages, other “revitalisation” approaches seek to claim language rights for the speakers and speaker groups of these languages. This approach works only if there exists a sufficient language consciousness to underpin a group claim. In France, the speakers of the languages of France in general present only a very weak language consciousness, in view of the fact that they consider their idioms as “patois” in the sense of objects of low value. This idea is the fruit of decades of French language policies denying any language diversity to the benefit of French alone as the universal language of emancipation.

The situation can therefore develop in the direction of an active re-appreciation only in the context of unequivocal political support which does not see the regional languages as a threat. On this subject, the European Charter is very clear in the definition of its objectives:

The Charter is based on an approach that fully respects national sovereignty and territorial integrity. It does not conceive the relationship between official languages and regional or minority languages in terms of competition or antagonism. Development of the latter must not obstruct knowledge and promotion of the former. According to the Charter, each language has its rightful place.

James Costa, a British researcher working on the Occitan and Scots languages among others, summarises the situation well in recalling that the demand for more rights for Occitan is located in an open vision turned towards the future:

In that sense, language revitalisation isn’t about regenerating pre-existing groups, but about inventing new ones, on new terms, while drawing on a construction of those groups as timeless or ancient.