In Turkey, China initially emerged as an important supplier of vaccines 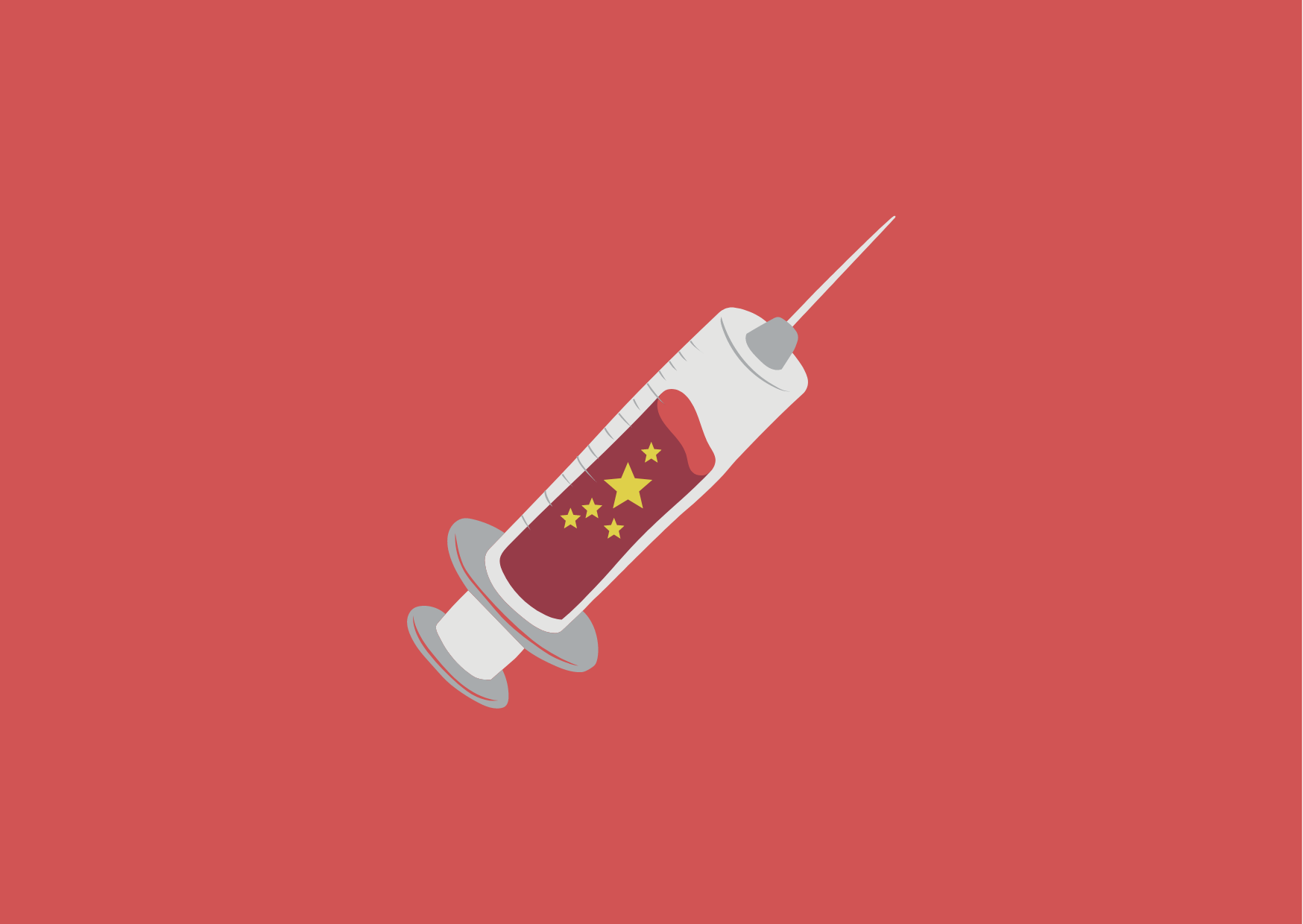 In Turkey, as in many countries, China initially emerged as an important supplier of COVID-19 vaccines. But due to Turkey's historically negative perceptions of China — which strengthened with the emergence of the coronavirus in Wuhan — many citizens have questioned the efficacy and reliability of China-made vaccines.

Though some are concerned China’s vaccine efforts may be as much about public image as public health, it has nonetheless been an active contributor to worldwide efforts to combat the virus.

But despite their contributions, they have been unable to overcome longstanding negative perceptions in Turkey. To complicate matters, China has failed to deliver millions of promised vaccine doses to Turkey, forcing Ankara to seek alternatives like the German-made Pfizer-BioNTech and Russian Sputnik vaccines.

China sought to control the spread of COVID-19 domestically at a very early stage. It has presented its containment methods as a model for other nations to emulate. Starting in March 2020, Beijing sent medical teams and supplies to other countries to help them fight the coronavirus, marking the first stage of its coronavirus diplomacy efforts.

The second stage has been centered around vaccines. Beijing has so far delivered 597 million doses of vaccines worldwide, of which 38 million were donated.

These efforts have been part of the revitalization of China's Health Silk Road. First announced by President Xi Jinping in 2016, the Health Silk Road is the health branch of the Belt and Road Initiative.

Turkey was among the very first countries to purchase China-made vaccines. When the deal was made, CoronaVac, produced by the Chinese biopharmaceutical company Sinovac Biotech, was not yet approved anywhere, even in China. Turkey, Brazil, and Indonesia were test sites for Phase 3 trials of CoronaVac. Turkey’s participation significantly contributed to China’s vaccine diplomacy and international prestige.

However, these promises never materialized in full or on time as China postponed the delivery of vaccines numerous times. According to Bridge Beijing, by August 10, 2021, Turkey had received only 31.4 million vaccine doses from China.

Many politicians and Uyghur activists living in Turkey speculated about the reasons behind the delays. Some pointed to a treaty for the extradition of Uyghur Turks signed between Turkey and China in 2017 as a potential reason for the delay. That treaty was ratified by China in December 2020 but has not yet been ratified by the Turkish Parliament.

Yıldırım Kaya, an MP from the Republican People’s Party (CHP), submitted an inquiry to parliament asking whether the delay of China's vaccines could be linked to delays in the ratification of the extradition treaty. Instead of answering the question, Koca blamed the opposition for the delays in deliveries. In May, Koca claimed those questioning delivery delays “were trying to disrupt our relations by scratching open sensitive issues between us and China. I can't say they were successful, but they sure did damage.” Good Party (İYİ Party in Turkish) Leader Meral Akşener disagreed with Koca’s statement:

Chinese officials said the delays were not political and instead were due to China’s decision to prioritize domestic vaccination to achieve herd immunity.

According to Associate Professor Ceren Ergenç from Xi’an Jiaotong-Liverpool University, Turkey has done China a favor by procuring Sinovac vaccines at a very early stage. This might have softened China’s insistence on the extradition of Uyghurs from Turkey.

The Turkish government’s initial decision to only acquire what many in Turkey pejoratively call the “Chinese vaccine” caused heated debate in Turkish society.

In December 2020, Health Minister Koca stated that the method by which vaccines were produced mattered more than their origins: “Chinese vaccine, German vaccine, English vaccine, American vaccine… We can’t handle the issue like that. The first thing we need to consider is the method by which the vaccine is produced… Vaccines produced by the inactivated method are more reliable… [the Chinese vaccine] is produced by the inactivated method.”

Regardless of official statements, different surveys showed that the overwhelming majority of Turkish citizens did not trust vaccines from China.

According to Marmara University professor Çağdaş Üngör, this is related to Turkish society’s prejudices against China. Due to cultural and moral judgments, Turkey's nationalistic historiography, and the Uyghur issue, many Turkish people already have negative views on — and even feelings of enmity toward — China. Public opinion polls support this claim. According to a poll conducted by Kadir Has University, only 27 percent of Turkish society regards China as a friend. This could be why the government has struggled to push the vaccine from China.

Turkish society’s hesitant approach to China's vaccine has been reflected on social media as well. On Twitter, some users derided the vaccine by sharing photoshopped pictures of Koca, which made it seem as if receiving a shot would turn him into China’s President Xi Jinping:

Sinovac Vaccine Before and After

In May 2021, Turkish citizens Özlem Türeci and Uğur Şahin, the owners of BioNTech, offered the country a lifeline. Following December 2020 talks between BioNTech and Turkey, by April 2021, Turkey was to receive 4.5 million doses of the mRNA vaccine, which, according to research, produces 10 times more antibodies than CoronaVac.

On May 20, 2021, during a video call between Şahin and Minister Koca, the two agreed that 120 million doses of Pfizer-BioNTech vaccines would be delivered throughout the summer.

The summer delivery of the Pfizer-BioNTech vaccines led to a sharp increase in Turkey's vaccination rate. According to the Turkish Ministry of Health, as of August 10, 2021, a total of 78,245,805 vaccine doses had been administered, as can be seen here. 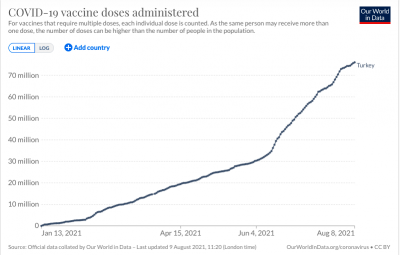 Turkey ranks ninth in the world for total vaccines administered. Yet despite the government’s vaccination efforts, only 45.9 percent of the population has received at least one jab.

In Turkey, those under 18, which makes up 27.2 percent of the population, cannot yet be vaccinated. Many citizens also refuse vaccination. On July 25, 2021, Koca stated that 23 million people over 18 were still to be vaccinated and that almost 9 million vulnerable people need to get a third dose.

The vaccine rollout in Turkey illustrates the challenges to China's Health Silk Road initiative. Skepticism of China's vaccines, coupled with China's inability to deliver vaccines to Turkey, has pushed Ankara officials to other nations for solutions. The Health Silk Road languishes as a result.