In Turkey, a social media battle amid ongoing blazes 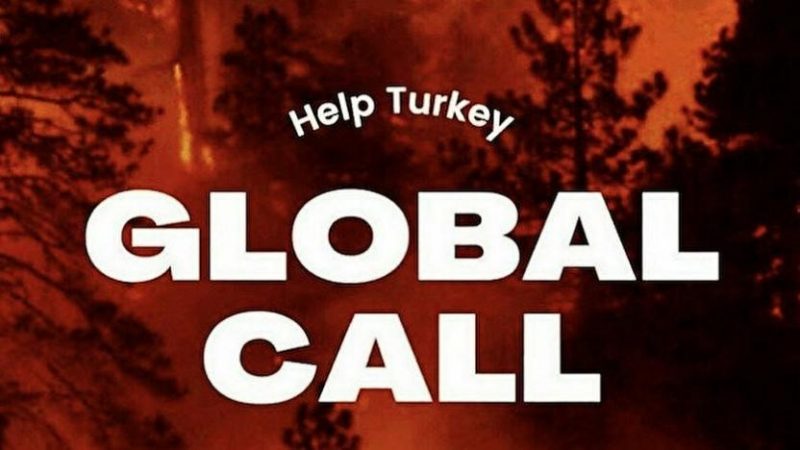 The image and hashtag were used millions of times.

Turkey has been facing the worst forest fires in decades. Since the first blaze was started on July 28, over 200 fires have raged through Turkey's southern coast, killing 8 and burning down at least “three times the area affected in an average year.” Amid ongoing criticism against the ruling government's response, one hashtag gained momentum amongst disgruntled citizens. Following President Erdogan's visit to one of the damaged areas, where he was seen tossing packages of tea to fire survivors, the hashtag #HelpTurkey spread across Twitter, Facebook, and Instagram, with over 2.7 million shares across the platforms. The cry for help was accompanied by a message:

I am calling all the countries which can help us. We are perished and devastated with the total of 112 fires. The ones that we can’t stop are still going so strong. We don’t have enough fire fighting planes to stop it. We lost 8 people, so many animals and our forests. Please help us. We need planes urgently. We only have one world.

The ruling Justice and Development Party (AKP) was caught off guard by the blaze and hadn't stocked up on fire fighting equipment. It also refused to accept foreign help, until it became clear that without it, the fires would be impossible to stop given the absence of local fire-fighting planes. However, it's one thing for the government to accept help and another for citizens to beg for it. #HelpTurkey was the latter.

As a result, shortly after the hashtag gained momentum, the Ankara Chief Public Prosecutor’s Office opened an investigation into the campaign and those who shared the message accusing them of spreading “anxiety and fear.”

Technical examination, revealed that some individuals and groups are trying to create anxiety, fear and panic among the public and insult the state and government of the Republic of Turkey in an organized way through real or bot accounts.

According to reporting by Hurriyet Daily News, the prosecutor launched the probe against the persons who coordinated fake accounts and circulated the posts containing “criminal elements,” on charges of “insulting a public employee,” “insulting the president,” insulting the government and the state,” “creating concern, fear and panic among the public” and “inciting hatred and enmity.”

The announcement of the probe came shortly after the Radio and Television Supreme Council (RTÜK) — the chief government censor of media — warned local media platforms to reduce their negative coverage of the fires, or face fines. The letter said, that “ignoring” the fires that were “successfully extinguished” and “insistently broadcasting only burning areas is the type of broadcasting desired by those who expect an atmosphere of chaos.”

Addressing journalists after Friday prayers, on August 6, President Erdogan, who was heavily criticized the campaign said, “In response to this, there’s only one thing we can say: Strong Turkey. A terror of lies is being spread from America, Europe, and certain other places.”

The president repeated his position in a televised interview with journalists on August 4 calling the Help Turkey campaign a lie and a product of jealousy.

We have all the network analysis and data available about the #HelpTurkey hashtag. If any of our innocent, patriotic citizens get hurt in this witch hunt, CHP will be their advocate until the end…

To counter the trending #HelpTurkey the government responded with its own hashtags #StrongTurkiye and #WeDontNeedHelp.

However, neither reached the same popularity, though numerous officials tried to promote the hashtags, including the Communications Director Fahrettin Altun:

We are using all the resources at our disposal to take the widespread fires in our country under control, and our struggle is still continuing. Out of the 129 fires in 35 cities, 122 are under control. Our Turkey is strong!

This is not the first time Turkish citizens used Twitter hashtags as a way to express their discontent. During the Gezi Protests in 2013, the #occupygezi hashtag and similar Gezi-related hashtags were used 2 million times in only 24 hours. Images of the police using excessive force and tear gas were included under the hashtags.

What makes the recent hashtag war different is the way they emerged.

According to social media analyses, all three hashtags were created by automated accounts that were later removed. The hashtags were then picked up by genuine users that helped the hashtags spread organically and gain traction. Speaking to Al-Monitor, Director of German Marshall Fund in Ankara, Ozgur Unluhisarcikli, said:

[The] #HelpTurkey hashtag was likely initially intended to highlight the government’s perceived mismanagement. This is what the government is reacting to, but in a democracy, citizens have the right to make such rhetorical statements; it’s freedom of speech. This is a fight between the government and the opposition on perception management.