According to the Swiss Embassy, 'Wilson Edwards' does not exist 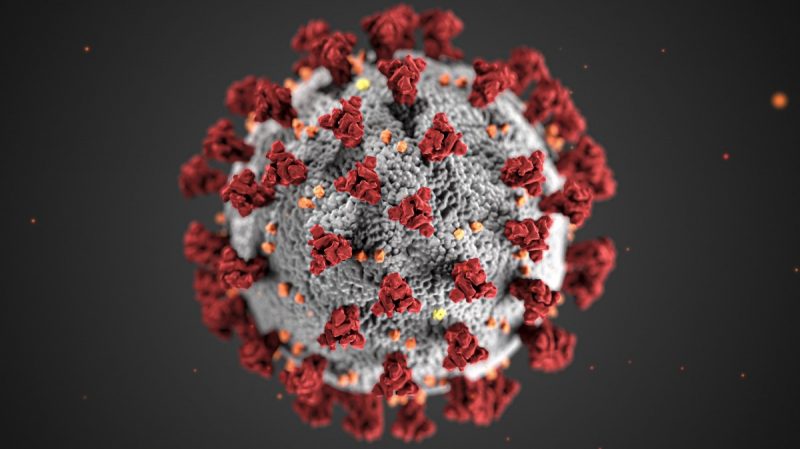 The original version of this post was written by Rhoda Kwan and published in Hong Kong Free Press on August 11, 2021. The following version was edited is published by Global Voices under a content partnership agreement with HKFP.

The move comes after the Swiss embassy issued a statement on August 10 saying no Swiss citizen by the name of Wilson Edwards exists, and no academic articles had been written by any biologist with that name.

In the last several days, a large number of press articles and social media posts citing an alleged Swiss biologist have been published in China. While we appreciate the attention on our country, the Embassy of Switzerland must, unfortunately, inform the Chinese public that this news is false. 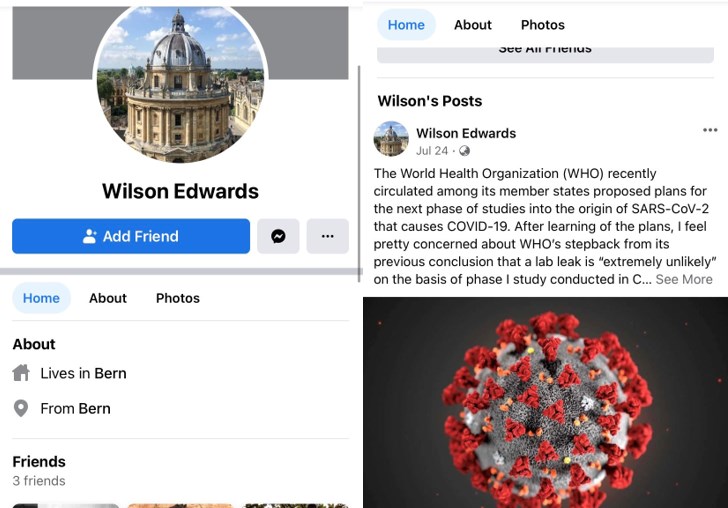 A screenshot of the now-deleted ‘Wilson Edwards’ Facebook page via HKFP.

In a Facebook post from July 24, an account under the name ‘Wilson Edwards’ claimed to have witnessed the US attempting to ‘politicize’ the World Health Organization's (WHO) continuing efforts to uncover the origins of the coronavirus. The ‘biologist’ said,

I have the impression that WHO’s new plans, which include lab audits, are largely politically motivated… The WHO sources told me that the U.S is so obsessed with attacking China on the origin-tracing issue that it is reluctant to open its eyes to the data and findings.

It also questioned the international health body’s independence, accusing the US of attempting to place its own experts on the team responsible for the second phase of the probe.

The post also quoted a ‘source’ as saying that US President Biden would ‘spare no effort’ to ‘rebuild US influence in the organization’ and ‘seek to dominate key issues.’

#COVID19 #COVID19nsw @WHO @DrTedros @FauciFan As scientific issues continue to be politicized, I have no doubt that this advisory group would be succumbed to a political tool. https://t.co/zjYDZcQLhm pic.twitter.com/i4rYkzAv2m

The claims were later picked up by Chinese state media, including People’s Daily, China Daily, Global Times, and CGTN, which all accused the US of politically manipulating the WHO’s probe into the origins of COVID-19. One week after the original post, People’s Daily published an opinion article with the headline, ‘US attempts to overturn report, leveraging WHO into political tool: Swiss biologist’.

It also called on the Chinese press and netizens to take down posts featuring the disputed biologist, saying it is likely a case of ‘fake news’.

Looking for Wilson Edwards, alleged ?? biologist, cited in press and social media in China over the last several days. If you exist, we would like to meet you! But it is more likely that this is a fake news, and we call on the Chinese press and netizens to take down the posts. pic.twitter.com/U6ku5EGibm

Earlier this year, a team of WHO experts carried out a probe in Wuhan, where the coronavirus was first detected. The investigation report said the theory that the virus leaked from a lab was ‘unlikely’. However, critics have questioned whether China granted the team full access to the available data. Beijing has since rejected plans for the second phase of the probe.

As of August 11, CGTN, People’s Daily, and China Daily all appeared to have removed references to Edwards from their articles, while the Global Times removed an article by CGTN from its site altogether.

The removed article, entitled ‘Covid-19 origin tracing: Claim emerges of “intimidation” from the US,’ was last accessible on the Global Times on Tuesday afternoon. Copies were still available via Google’s cache tool.

The debacle is the latest development in an ongoing dispute between China and the US about the origins of the coronavirus, in which both sides have claimed the virus was leaked from a lab on the other’s soil.

Although state media outlets have either deleted or removed references on their reports to ‘Wilson Edwards’, Hu Xijin, the chief editor of Global Times, wrote a Chinese post on Weibo arguing that the biologist was using a pseudonym for protection:

The pseudo account is not that important; it is a self-protection measure adopted by whistleblowers in the Internet era. What matters most is the validity of the content. Of course, if the writer can use a real name, the post would have a more significant impact. But if what he said is real, but he dare not use his real name, the incident reveals that the influence of the U.S is too repressive that it has resulted in a silencing effect in Western society. As a result, very few dare to use real names to speak the truth.

This is not the first time Beijing has relied on Western ‘expert’ personas to bolster its narrative.

In April, a CGTN article written by a French journalist named Laurene Beaumond disputed reports of mass human rights abuses against Uighur Muslims and other ethnic minorities in China’s Xinjiang region. Beaumond had allegedly lived in the region for years.

French paper Le Monde later ran an article saying that no French reporter by that name existed. In response, the Global Times published a piece asserting that the journalist was a real person using a pseudonym and demanded Le Monde apologize.