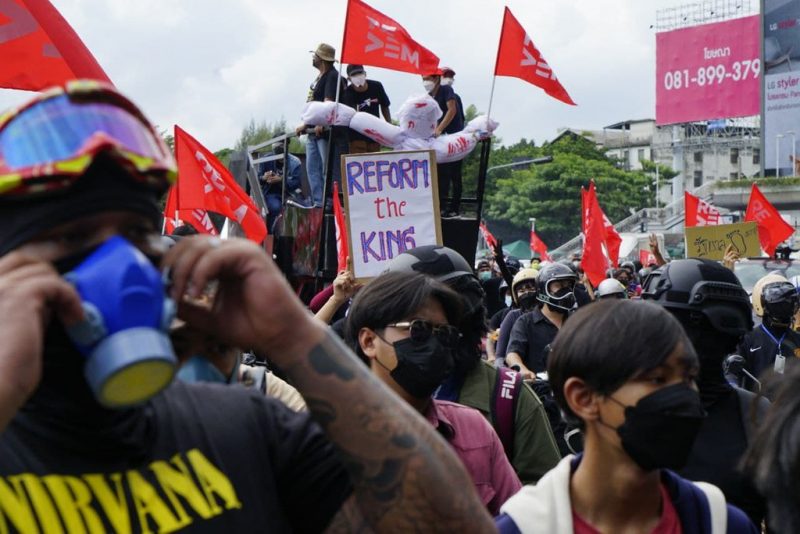 Protesters gathering at the Victory Monument prepare to head to the 1st Infantry Regiment headquarters. Photo courtesy of Prachatai

The original version of this article was published [1] by Prachatai, an independent news site in Thailand, and was edited and republished by Global Voices as part of a content-sharing agreement.

A protest in Bangkok against the Thai government’s alleged mishandling [2] of the COVID-19 pandemic was met with police violence on Saturday, August 7. Police used water cannons, rubber bullets, and tear gas against the protestors and arrested at least 18 people.

The protest was organized by the activist group Free Youth and partner organizations, who have made three demands [3]: the resignation of Prime Minister Gen Prayut Chan-o-cha, the reallocation of monarchy and military budgets toward COVID-19 assistance, and replacement of the Sinovac COVID-19 vaccines with mRNA vaccines. This is one of several [3] protests that have been held related to the government's COVID response.

At 12:25 pm, the police ordered the protesters to end their gathering and crowd control police began to advance on the protesters. There were reports that rubber bullets were used and that 2 protesters were arrested.

Firecracker-like sounds were heard at the scene. Protesters were also reportedly shooting slingshots and throwing glass bottles and rocks at the crowd-control police. Officers in the vicinity were seen wearing bulletproof vests and carrying cable ties, batons, and shields. Some were also carrying rubber bullet firearms.

However, protestors found the roads near the 1st Infantry Regiment headquarters closed, as the police had declared them a no-entry zone. The police ordered the protesters back to the Victory Monument, and the protestors refused, sparking. clash.

During the conflict, officers were told that they could use rubber bullets if protesters approached the police lines. The clash lasted for at least two hours, as police fired rubber bullets and tear gas at the protesters. At around 5:20 pm, police began using water cannons. 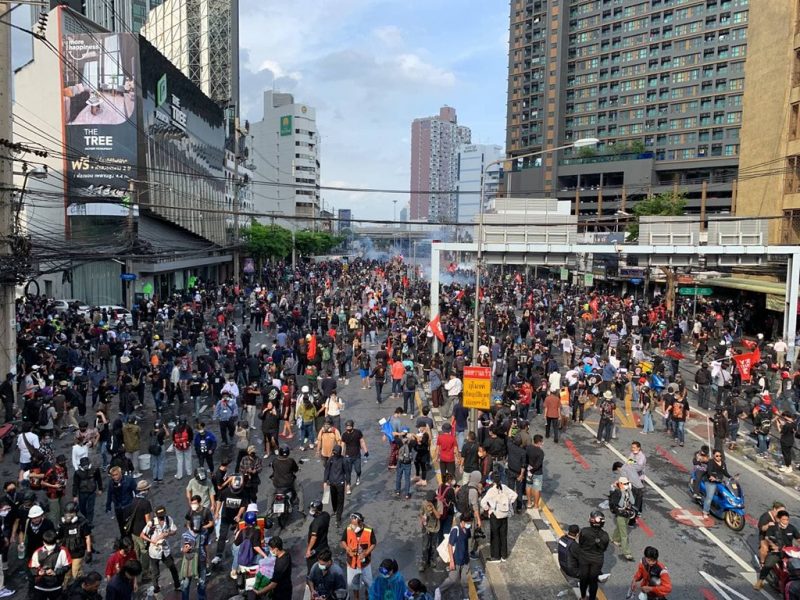 Tear gas was fired at protesters at the Din Daeng Intersection. Photo by Prachatai

Amid the tear gas, bullets, and water cannons, the protesters were forced to retreat to the Victory Monument and the organizers announced the end of the protest at 5:35 pm.

Several National Human Rights Commissioners weighed in on the protest. Regarding the potential violations of the right to freedom of expression, Commissioner Wasan Paileeklee said that even though there might be a legal framework supporting the police’s operation, their actions must be proportional. 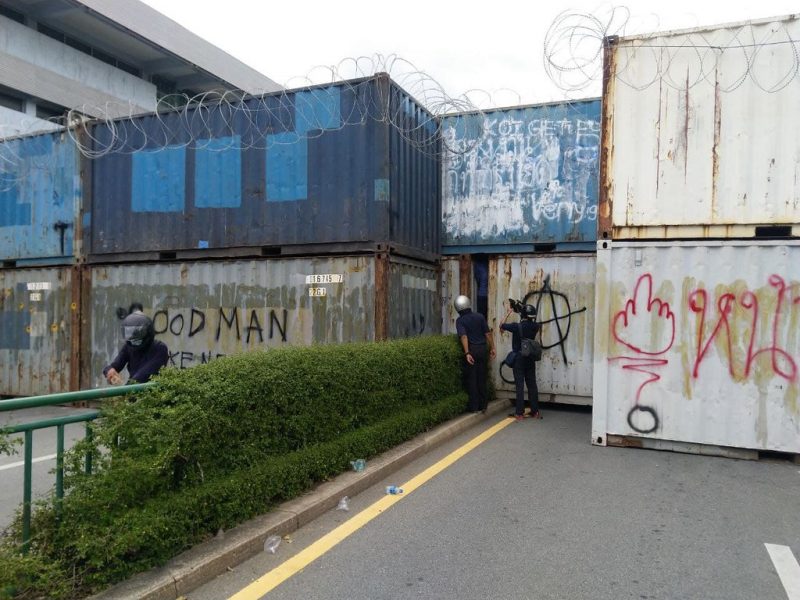 Rows of containers blocked the street at the Nang Leong Intersection. Photo by Prachatai

Activists harassed by officers ahead of protest

Police officers searched several activists’ homes ahead of the protest. Thai Lawyers for Human Rights (TLHR) reported  [5]that on Saturday, August 7 that three plainclothes officers and one uniformed officer searched activist Chukiat “Justin” Sangwong’s apartment at 7:30 am. Chukiat said that the officers also asked to see his computer, but he refused, and he was told that he would be charged if he shared images of the search warrant. TLHR said [6] that three plainclothes officers and one uniformed officer also searched the home of a Thammasat University student in Pathum Thani.

Activist Piyarat Chongthep said [7] that at least two members of the We Volunteer protest guard group were followed by police officers who tried to search their houses ahead of the protest. Officers also came to We Volunteer’s headquarters, and Piyarat later told [8] TLHR that around 10 officers were stationed outside the building, threatening that he could be arrested if he left to join the protest.

Piyarat also said [9] that two members of the We Volunteer protest guard group had been arrested at a friend's house on Friday night August 6. The house was also searched and the two detainees were later released after nothing illegal was found.

TLHR reported [10] that over 15 police officers also raided the residence of a We Volunteer member on Saturday morning, claiming that they had received a report of illegal activities. They arrested at least three people, brought them to the police station, and confiscated their car and mobile phones. No search warrant was presented. 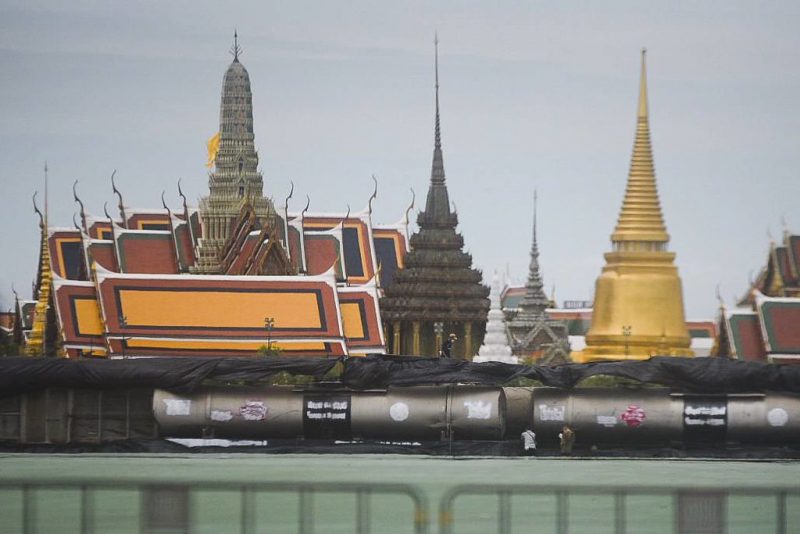 Oil tankers blocking the route to the Grand Palace. Photo by Prachatai.

Shipping containers and oil tankers were placed across Sanam Luang on Saturday morning to block the original route of the march to the Grand Palace. A banner saying “The king’s soldiers and the police of the (good) people have joined forces, ready to protect Wat Phra Kaew and the Grand Palace” was hung from the containers.nearby roads were also closed.

TLHR later published [11] a letter from Assistant Police Commissioner Pol Lt Gen Kraiboon Suadsong to the State Railway of Thailand requesting the use of decommissioned train cars and oil tankers to prevent activities risking the spread of COVID-19.

The State Railway Workers’ Union of Thailand (SRUT) then issued [12] a statement calling for decommissioned rolling stock not to be used as barriers, and for an investigation to be launched into how the train cars were taken. They also expressed disagreement with the train cars were used, as the right to peaceful assembly is enshrined in Thailand's Constitution and in international human rights law.

The SRUT said that there is a risk that dangerous objects could be placed in the cars and oil tankers, potentially causing harm. 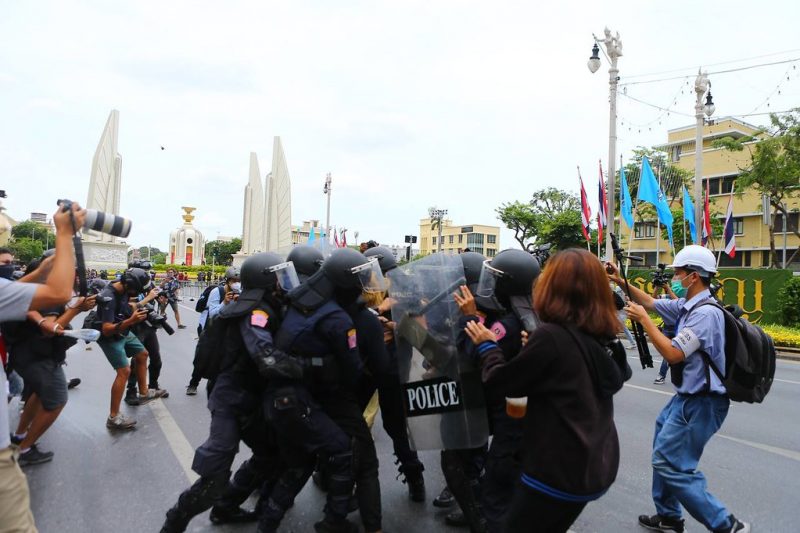 A protester was arrested at the Democracy Monument (Photo from iLaw)

TLHR reported [13] that at least 18 people were arrested before and during Saturday’s protest. TLHR also said [14] that two protesters who were arrested at the Democracy Monument had thier hands tied with cable ties, and one of them showed signs of being assaulted while in detention. TLHR later reported [15] that police officers also detained the driver of a van carrying four speakers after the protest, pushing him to the ground before arresting him.

Eight We Volunteer members arrested before the protest were charged with being members of a secret society under Sections 209 and 210 of the Thai Criminal Code, while the remaining 10 people were charged with violating the Emergency Decree.