Graffiti in Almaty between scandals, competition, and trolling

Street art in Kazakhstan is changing, pulled in different directions. 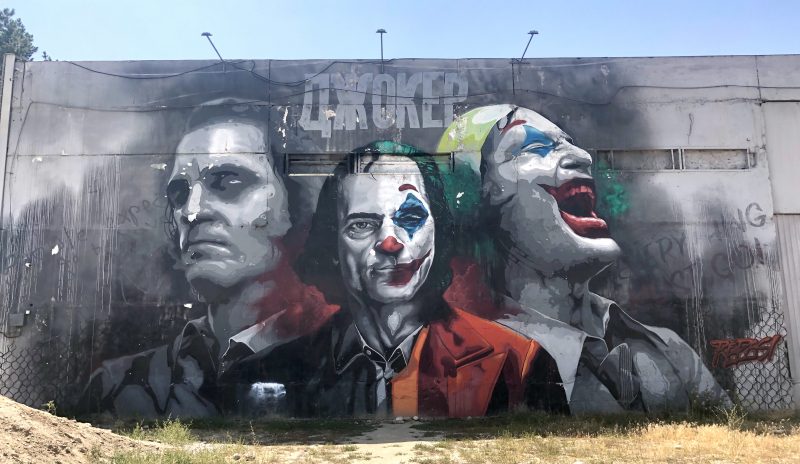 A mural celebrating The Joker in Almaty, near the Grand Park shopping center. July 23, 2021. Photo by Alina Zafar, used with permission.

Once labelled as vandalism or cheap art in Kazakhstan, graffiti and murals have risen to prominence thanks to talented street artists, and have also been exploited as tools of government propaganda.

In Almaty, Kazakhstan’s largest city, murals have come to represent a strange battlefield between youth activism and government-sponsored messages. Some murals challenge the current political establishment; others exalt its achievements.

In recent years, authorities have tried to use graffiti to promote messages of national unity and culture, yet these murals have often been trolled and spoiled by other young artists.

Art — especially graffiti — is one of the few outlets for free speech in highly controlled and authoritarian Kazakhstan. When the media is totally controlled and the internet and social networks are partially blocked or filled with state bot-farms, art is the only way to demonstrate discontent. Kazakhstan ranks 155th in the global press freedom ranking, and local people have long struggled to make their voices heard.

Street art is provocative, political, and free. In Almaty, artists found in the facade of buildings or urban walls an alternative space for challenging takes, away from the government discourse.

Government officials tried to tame the rampant graffiti wave and endorsed some state-sponsored murals, such as the painting of first-responders holding the world in their hands, as a tribute to their effort in fighting the COVID-19 pandemic. 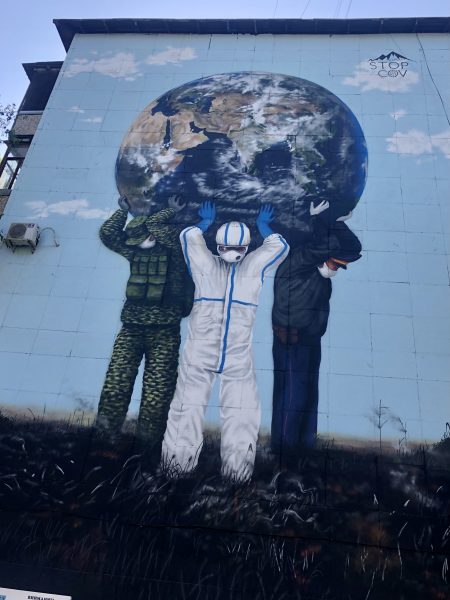 Facade of a residential building near the intersection of Tole bi and Baizakov streets. July 23, 2021. Photo by Alina Zafar, used with permission.

Yet, more popular murals are those with ironic images of the former president or pop-culture references that mock the establishment.

In 2019, REPAS, a street art collective, created a large-scale illustration dedicated to the premiere of The Joker, a movie centered around the villain in the Batman series. The mural attracted the attention of the film director, Todd Phillips, who also posted it on the official publicity accounts.

Stalin-, Khrushchev-, and Brezhnev-era architectural styles from the city’s Soviet past continue to pervade Almaty. The large facades of these buildings often provide an unintended canvas for the expression of street art. Almaty has routinely hosted festivals such as Mural Fest, Artbat Fest, and URBANIYA.

From being perceived as an act of vandalism, graffiti are gradually being recognized as pieces of art and features of Almaty’s urban landscape.

Some artists dare go beyond the few authorized topics and highlight hushed-up social problems. Pasha Cas, an internationally recognized artist from Almaty, is famous for questioning bureaucratic systems, from local governments to the UN.

One of his first installations was a controversial one. He hung a mannequin from the frame of a billboard in Almaty, with the provocative writing “Всем пох” (from Russian, “No one gives a f***“). His inflammatory installation addressed the chronically high suicide rates in Kazakhstan.

Some of Pasha Cas's manifests were either modified or taken down because of his uncompromising approach, from criticizing the censure of ‘sofa critics‘ and apathetic citizens to highlighting the desperation of not being heard (or, conversely, being too controlled) by the state.

His largest and most provocative projects addressed issues of ecology and pollution. A series of artworks in Temirtau (an industrial city in central Kazakhstan), Pavlodar (a town in the north of the country), and Semipalatinsk (a small city in the east), became the symbols of citizen activism against pollution. Making references to masterpieces of the early 20th century, Pasha Cas calls upon people to “shout, so that the people at the top, could HEAR us!” (emphasis in original).

In 2019, Forbes Kazakhstan included Pasha Cas in the list of the most successful people under 30.

The government's mainstream direction for urban murals has shaped the landscape with projects on social issues, from the COVID-19 pandemic to corruption to cycling. For these graffiti, artists refer to the country's nomadic past and to prominent Kazakh historical figures, such as Abai Kunanbayev, Dinmukhamed Kunayev, Abilkhan Kasteyev, and Abu Nasr Al-Farabi.

Globalization has contributed to changes in street art aesthetics. Artists have increasingly showcased subjects from intertwining cultures and generations. One example is the work of the art association “FORMAT” which depicted Sergey Yesenin, a Russian poet of the Silver age, next to popular Hollywood actor Clint Eastwood. FORMAT summarized their concept with the phrase “Different classic.”

Yesenin and Eastwood in a graffiti at the intersection of Bruno and Islam Karimov streets. July 23, 2021. Photo by Alina Zafar, used with permission.

Soon after the Joker mural was painted, city authorities tried to remove it, citing their effort to harmonize street art objects and to clean up murals without approval. The government official who issued the clean up order later met with the authors of the mural and, due to popular pressure to keep the mural, scrapped the order for removal.

State and city authorities in Kazakhstan have tried to use graffiti for propaganda with mixed success. Some groups of artists aimed to commercialize the field, offering their services for decorating private businesses and promoting government programs. Other, independent artists claim this trend goes counter to the resistance identity of graffiti, which is still harshly criticized by the government and conservative neighborhoods.

Whichever direction the making and unmaking of murals will take, the street art landscape of Almaty is changing.