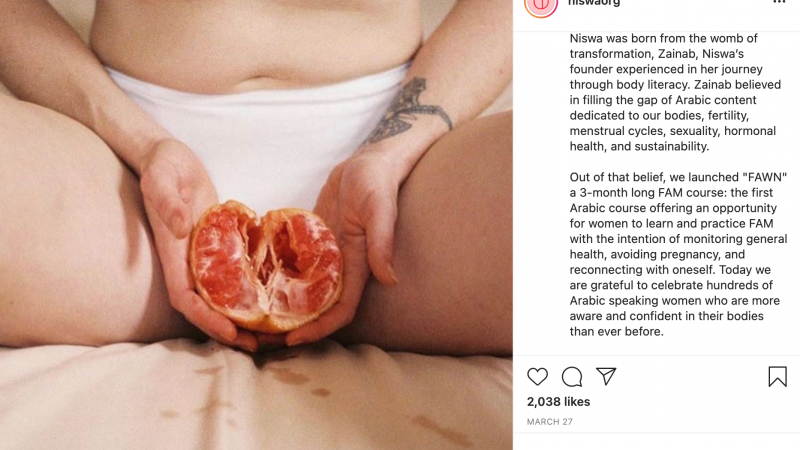 A screenshot from an Instagram post by Niswa, one of several social media bids to erase sexual illiteracy.

In recent years, as sex education curriculums remain unattainable in most Arab countries, several Arab women have taken on the task of providing alternatives, offering sex-related information via social media to an increasingly curious youth.

As of now, Tunisia remains the only Arab country with a sex education curriculum, introduced through a pilot program in the public-school system in 2020. Lebanon and Morocco have witnessed debates around the inclusion of sex-ed, with Lebanon going as far as introducing a curriculum in 1995. A few years later, it was pulled down after mounting criticism from religious and political institutions.

In the rest of the Arab world, sex education is confined within the conservative boundaries of religious and biology classes, restricted to carefully hand-picked topics like puberty, the reproductive system and sexually-transmitted diseases. Meanwhile, conversations about sexuality, fertility, sexual abuse, and safe sex, or concepts like consent and gender diversity are reduced to whispers among students in school corridors, often based on unscientific or pornographic online content, if not completely muted.

Nowadays, this void is being filled by homegrown civil society organizations and independent educators. Social media, which once helped millions break political taboos in the region, is creating the space to educate youngsters, have debates and break the stigma around sex.

One such initiative is Niswa (“women” in Arabic), a popular Instagram page founded by Saudi Zainab Alradhi. In emailed responses to Global Voices, Zainab said she started Niswa because of her own experience growing up.

I grew up — like most girls in my generation — lacking body literacy. I had limited information about my body, menstrual cycle, and what it meant to be born in a female’s body.

It wasn't until she read the book Taking Charge of Your Fertility that she was able to find the vocabulary and the passion to connect with an important part of herself, her body. She went on to become a fertility awareness educator. Through her website and Instagram page, with nearly 56,000 followers, she offers courses that teach reproductive health and fertility awareness as not only a method of birth control, but also a self-awareness tool.

Mauj (“waves” in Arabic) is run by women from Lebanon, Saudi Arabia and Egypt. Set up less than a year ago, the Instagram page, which focuses on sexual and reproductive wellness, already has over 50,000 followers.

Mauj staunchly believes in the importance of incorporating sex education in school curriculum, including conversations about consent, pleasure, and the female orgasm. They told GV via email that, while one's sex life is often many people’s business in Arab societies, this rarely translates into support for sex education, because of the dominant patriarchal structure in Arab societies and what is deemed “inappropriate” or “socially unacceptable.” The consequences of which can be serious.

If we continue to avoid these conversations and to treat sexual education like a taboo, we are, in fact, only harming those that we are trying to protect. We are doing girls a huge disservice by keeping them in the dark for too long, it leaves them unprepared for their relationships and can even make them more vulnerable to abuse.

Safa Tamish, from Palestinian organization Muntada al Jensaneya (the Sexuality Forum), in Haifa, said she noticed a wide array of opinions with regards to sexual education for children and teens. Rejection of such curriculum, she told GV, often comes from preconceived notions, such as ‘sex-ed is imported from the West’ or  ‘it will spread immorality and detachment from local values.’

A screenshot from the series “Why does the animal?” by Muntada Al Jensaneya, which aims to help adults to “logically, comprehensively and without being embarrassed” answer children's sexuality questions which often come from their observation of animals around them.

Young people remain the main target audience of these platforms. According to Mauj’s team, virginity and hymens are the topics most commonly asked about by their online community, which they see as the result of prevalent societal norms around women's virginity across the Arab world. Curiosity about sexual pleasure — whether solo or with a partner, myths around the hymen and masturbation, fear of sex, body image (specifically shape, size, and color of the vulva), and irregular periods are also frequent questions. The posts that receive the most engagement and backlash tend to be ones dispelling myths, challenging what Mauj’s crew refer to as “cultural scripts” and expectations about what it means to be and to behave as an Arab woman.

When talking about sex, sexuality and reproductive organs, Arabs typically use English terms or street slang. Civil rights organizations, educators and activists in the field, therefore, focus on disseminating, and at times introducing, the needed Arabic vocabulary.

Zainab from Niswa told GV that she found 30 different words to describe the vulva in Arabic but this vocabulary, and associated euphemisms, is not sufficient to create awareness. She therefore started a series called “reclaim your term“ to point out the correct vocabulary and encourage their usage.

Although Instagram has been the primary channel where Mauj and Niswa engage with their online communities in an accessible and an “edutainment” style—as Zainab calls it — the platform has its flaws. For Mauj, it is not a safe enough space for women. The team explains:

We do our best to moderate engagement on the posts, but it is not a private setting — like a secret Facebook group — which would've allowed women to talk as openly as they wish.

Zainab from Niswa says her Instagram content also faces censorship, making it an unlikely sustainable long-term outlet. She and others in her field have received warnings that their accounts or posts may be removed for “violating community guidelines,” especially after sharing cervical fluid/mucus educational images, which aren’t sexual images. She also noticed less engagement with posts including words like sex and orgasm.

Meanwhile, Safa of Muntada al Jensaneya — with over 30 thousand followers on Facebook—says social media enables her organisation to keep up with what's new to spread awareness on sexual and reproductive rights. However, the forum still focuses on in-person workshops and the training of Palestinian and Arab educators, specialists, and activists. This, Safa explains, is crucial to creating tangible transformation in Arab societies as a whole.