She made a name for herself in the male-dominated genre 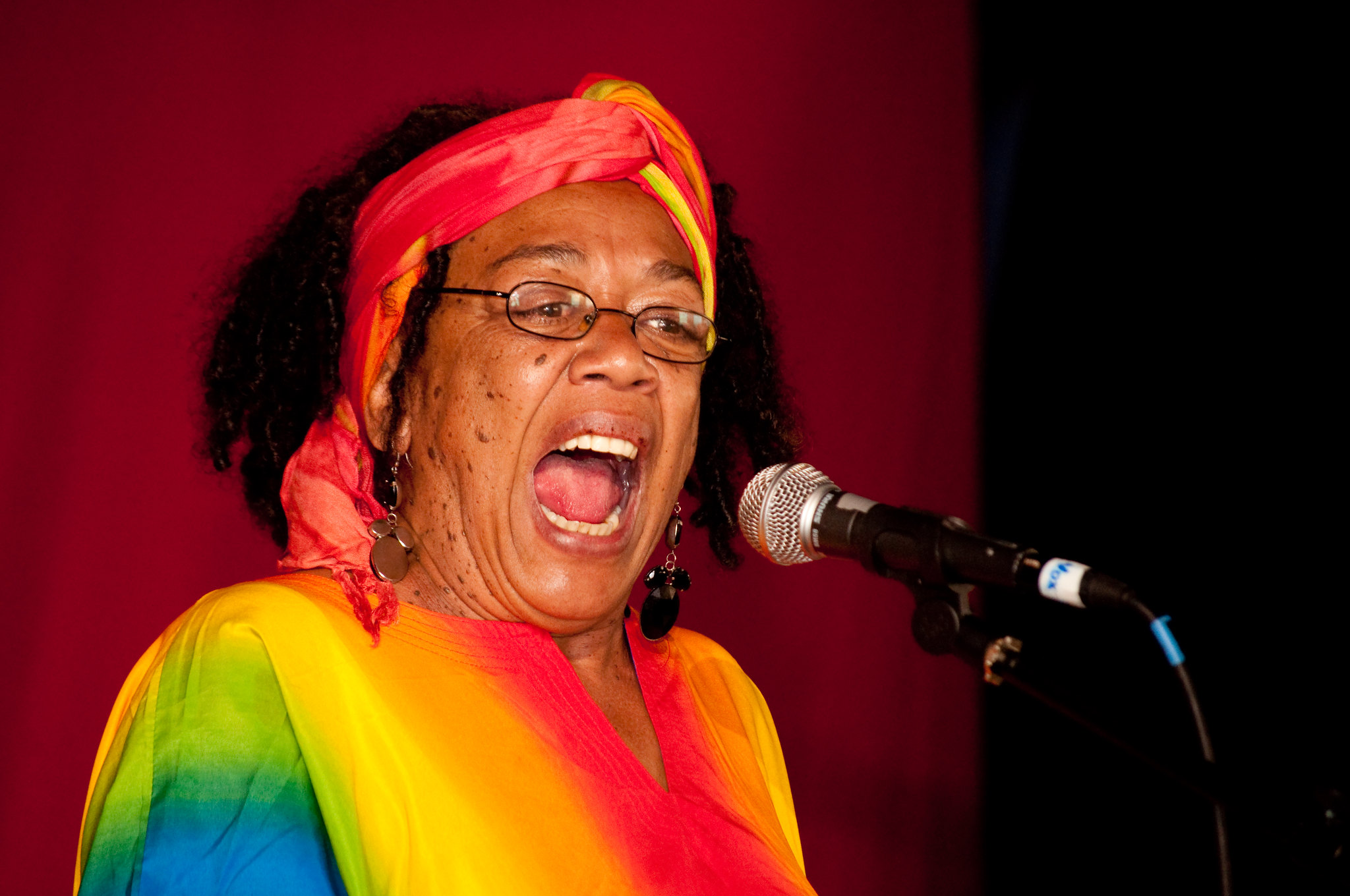 Pioneering dub poet, storyteller and cultural activist Jean “Binta” Breeze, whose unflinchingly honest performance poetry touched many hearts, died at the University Hospital of the West Indies in Kingston on August 5. Until her death she was living in her home in rural Hanover. She had been suffering from COPD, a chronic lung disease, for some time. She was 65 years old.

Breeze was born Jean Lumsden in 1956 and brought up by her grandparents, who were farmers in rural Jamaica. In a 2019 television interview, she recalled her grandmother sitting in her bedroom every evening, reciting poetry to her, which she still knew by heart.

She studied at the Jamaica School of Drama in Kingston. After meeting the UK-based Linton Kwesi Johnson, a pioneer in the emerging dub poetry scene, he invited her to attend and perform at the Black Book Fair in England. Dub poetry in the 1970s and early 80s Britain merged strong socio-political messages into spoken word poetry, with the accompanying dub music and heavy bass line providing rhythm and emphasis, as evidenced in the work of musician Dennis Bovell.

Breeze was the first woman dub performer to emerge and make a name for herself. Reflective of Jamaica’s storytelling tradition, her work involved repeated chanting in a narrative style. She would often use personal stories to heighten awareness of social concerns. Her poem “Mad Woman” (an edited version of which was performed here by a young Jamaica Festival song competition award winner) was a raw and poignant expression of mental illness in Jamaica, which she herself experienced. Her first book of poetry, Ryddim Ravings (1988) also touched on this. In a 2006 BBC radio programme, Breeze gave her perspective on understanding and treating schizophrenia. However, her poetry could also be upbeat and cheerful.

Adopting the U.K. as her home for some years, Breeze taught Theatre Studies at Brixton College for two years, eventually settling in the Midlands town of Leicester, where she taught creative writing as an Honorary Fellow at Leicester University’s School of English. She received an Honorary Doctor of Letters degree from the university in 2018. She was also honoured with a Lifetime Achievement Award from the Jamaican Poetry Festival and a silver Musgrave Medal from the Institute of Jamaica. Prior to these accolades, in 2012, Breeze became a Member of the Order of the British Empire (MBE) for her services to literature. 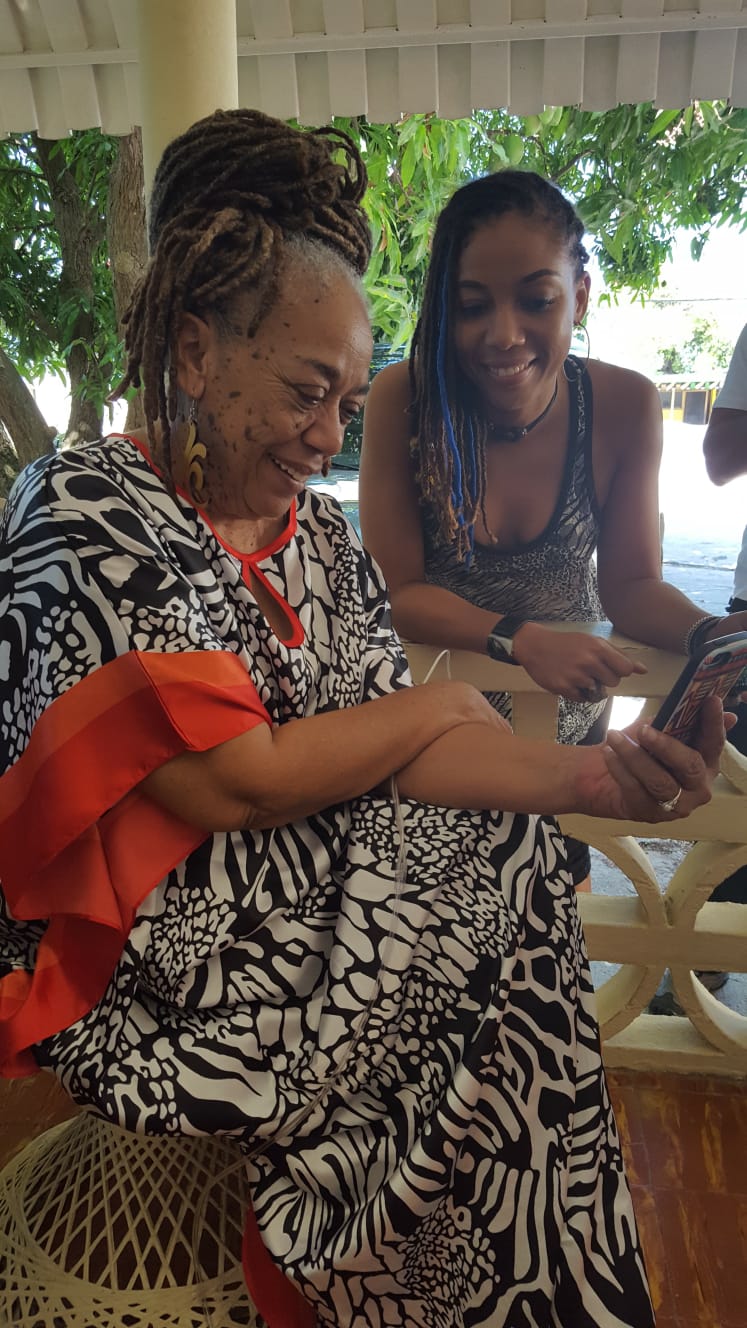 Jean “Binta” Breeze and her daughter, Imega Breese McNab, on the poet's birthday in 2017. Photo by Fae Ellington, used with permission.

Her life was dedicated to performance and writing—not just poetry, but she also wrote for theatre, television, and film. Later in life, Breeze divided her time between the U.K. and Jamaica. Much sought after for literary and cultural festivals, she toured extensively on the international circuit, making appearances in the Caribbean, North America, Europe, Asia, and Africa.

After hearing of her passing, the Poetry Society of London tweeted:

“I now stir the skies”
We are so sad to learn of the death of poet Jean Binta Breeze, much loved Jamaican-Londoner. Sharing below, her poem Rising, recently displayed on the tube as a Poems on the Underground poster. pic.twitter.com/AHs47FAJT6

On the occasion of the 70th anniversary of the Windrush—the beginning of the West Indian post-World War II migration—Breeze's poem “dreamer” was among several by Jamaican poets displayed on the London Underground.

Her UK agents, Renaissance One Writers and Events, shared their grief at Breeze’s passing:

Sending our deepest condolences to her family and friends during this terribly sad time. pic.twitter.com/yP3bkIAX4F

The British press also hailed Breeze’s life, with the UK Guardian describing her as “one of the most important and influential contemporary poets.”

Back in Jamaica, broadcast journalist Fae Ellington, who had recently done a television interview with Breeze, tweeted a photograph and a message:

The breath is gone but your legacy lives on. #JeanBintaBreeze#Poet pic.twitter.com/bCAm1P2IK4

Jean ‘Binta’ Breeze was my sister friend. My dear friend. A brilliant poet. Her life's experiences provided her a varied palette from which she painted stories…her poems. She was authentic, true to herself and honest to a fault about herself. Walk good, my sister friend. She was a most outstanding poet who was celebrated in Jamaica, the UK and Europe.

My condolences to her son Gareth and wife Celia, daughter Imega and husband Alan, and daughter Caribe.

Justine Henzell, co-founder of Jamaica’s Calabash Literary Festival, tweeted her condolences, noting that the poet had performed at the festival in 2004:

So sad to hear of the passing of the amazing Jamaican poet Jean Binta Breeze. Jean graced the @calabashfest stage in 2004 pic.twitter.com/CknVzZzCtT

Jamaica’s Poet Laureate, Olive Senior, posted a photograph of her at a National Library event in Montego Bay:

It is with deep regret that we note the passing of Jean “Binta” Breeze, MBE, renowned Jamaican dub poet and the mother of our Executive Director, Imega Breese McNab. We extend our sincere condolences to the family and friends of this iconic Jamaican woman. pic.twitter.com/wDjDS4YrGg

Jamaican poet and cultural activist Owen “Blakka” Ellis, who studied at the Jamaica School of Drama with Breeze in 1978, told Global Voices:

I was the one who named her ‘Binta’. At the time, the radical black artists at what is now the Edna Manley College of the Visual and Performing Arts were all choosing African middle names. Among other meanings, ‘Binta’ signifies ‘close to the heart’ or ‘daughter.’

For me, a key feature of her legacy as a Caribbean poet is in how she beautifully embodied the intersection between literary rigour and performance power.

Breeze was greatly loved, both in Jamaica and in her second home in the U.K., where her commanding, passionate voice will be certainly be missed.