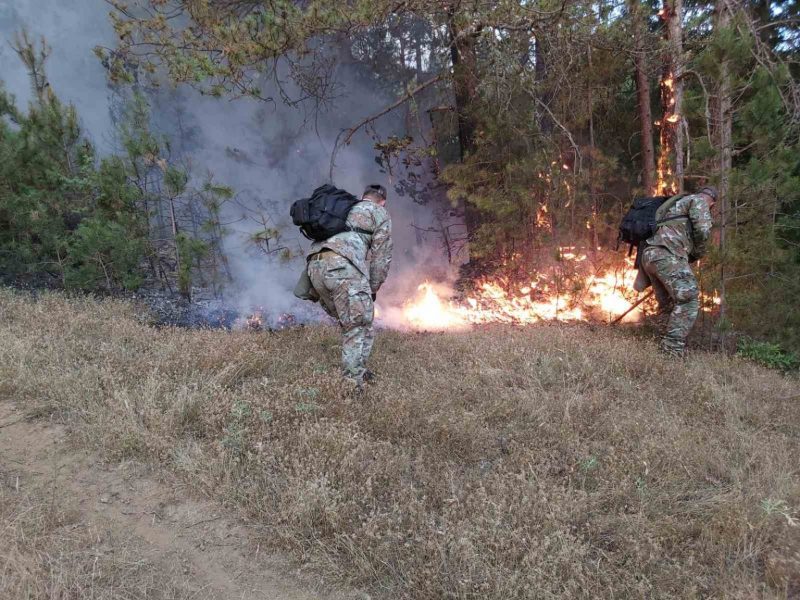 Army of Republic of North Macedonia solders putting down a fire near Kochani. Photo by www.arm.mil.mk, used with permission.

In response to wildfires ravaging throughout North Macedonia, the government mobilized the the army to fight the fires and imposed a complete ban on movement in forest areas, declaring a state of crisis at national level. The situation is similar to Turkey, Greece and other countries in the south of Europe where the summer heat wave has resulted in wildfires.

From Monday, August 3, the national government imposed a complete ban for movement in the forest areas  in North Macedonia, pleading with citizens to not go into the forests—both for their own safety and to prevent any further wildfires.

The wildfire that ravaged the area around the town of Kochani on the evening of August 2 was brought under control during the night and completely put out the next day.

The fire has been put out, and Kochani almost suffered the fate of the traffic sign on this photo! Be careful, and gratitude to all for their help and support! Don't play with fire!

As this  fire approached the town, panic spread over social networks, with many citizens demanding that the government start using helicopters and airplanes for firefighting. An announcement by the president that helicopters can't be used to put down fires at night was used as political propaganda to portray the government as incompetent. Rational voices explaining that safety standards prohibit night use of aircraft for this purpose were drowned by ‘Facebook experts,’ in a shouting match that stopped only after helicopters were deployed in the morning.

Jane Stefanov, an actual sports pilot and member of Aeroclub Skopje, tried to explain in a much-quoted tweet thread:

You insisted that military aircraft fly during the night… how could they not… that they had helicopters with night vision equipment… and so on and on. You have to understand that putting down fires poses huge risk to pilots’ lives even during daytime… Taking water from a dark lake, and dropping it at low altitude over rough terrain [is no joke]—that video game doesn't have a reload option!

Throughout the country, there are several locations with active wildfires. The  worst outbreaks were at Kochani in the east and in the northern municipality of Staro Nagorichane. In both places, besides many hectares of forest, several vehicles, houses and other private property also burned down.

At Staro Nagorichane a helicopter intervened first due to danger to homes near the  archeological site of Kokino. Meanwhile, in Kochani, several firefighting teams and army personnel were sent to fight the wildfires with the firefighting unit from Kochani and the local population. Another 1,000 soldiers and another helicopter are at standby in army bases. Army units also engaged in fighting the wildfire between the towns of Delchevo and Pehchevo. 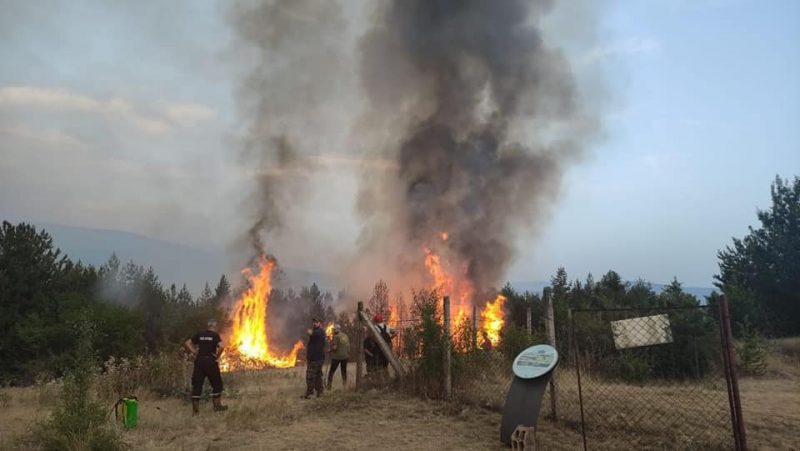 A fire near Pehchevo, North Macedonia. Public Domain photo from Facebook page of government institution Directorate for Protection and Rescue.

Wildfires were also registered at Makedonski Brod in the central part of the country, and Valandovo in the south, near the border with Greece.

A fire spread by strong winds near the southern border town of Gevgelija also endangered the hotels, casinos, gas stations and border crossing station Bogorodica-Evzonoi. Cross border traffic  stopped during this time, and was restored after several hours.

During the first few days, these fires were all eventually put down or localized without causing human casualties or incinerating the buildings through the efforts of state authorities joined by local citizens and companies.

However, on August 5, а missing woman in a remote village of Chelopek in Staro Negorichane is feared dead, as her husband claimed she remained in their  house that was engulfed by fire. By the time of closing of this post the police has not finished the investigation that would confirm the death. 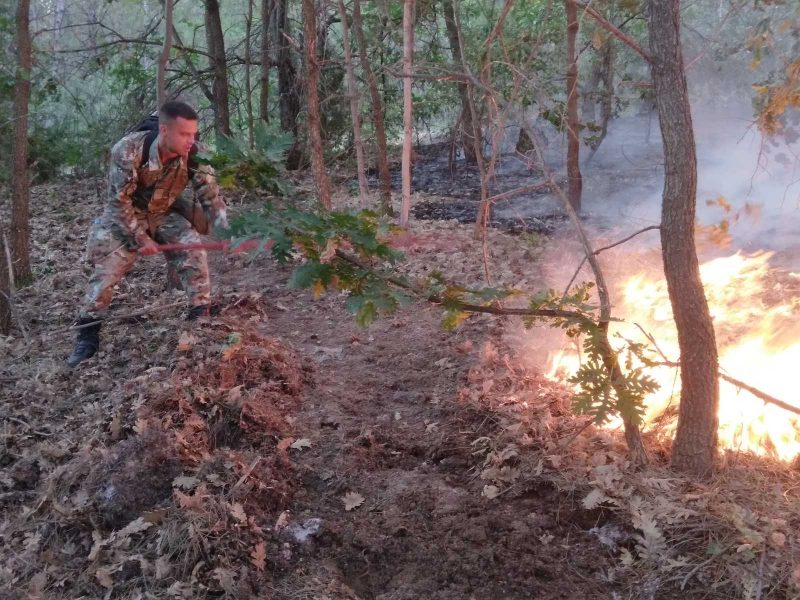 Army of North Macedonia soldier putting down a forest fire. Photo by www.arm.mil.mk, used with permission.

All in all, on August 3, the Crisis Management Center recorded about 14 active wildfires across all regions of North Macedonia. The next day, it recorded 11 active fires, with three new ones and the 8 ongoing. Even though most of them had been put out, on August 5, there were ten active fires reported by this state institution.

For over a week, North Macedonia has been under a prolonged heatwave with very high temperatures and no rain. The meteorologists have again forecast a strong westerly wind which will be especially strong in the west of the country’s. The orange high temperatures warning will be active till August 6.

On August 5, the government declared a 30-day state of crisis, mobilizing all relevant institutions in the fight to prevent and put out wildfires.

Research in 2020 by watchdog NGO Center for Civil Communications revealed that firefighting units in North Macedonia are severely underfunded and understaffed, and that the average age of their vehicles is 28 years, including trucks made in 1966.

Stronger Together! Through the @ECHO mechanism of the EU, Slovenia is providing help to North Macedonia in the fight against the wildfires. 16 vehicles and 46 firefighters are already on their way to MK where they will stay one week and fight the fires alongside their colleagues. pic.twitter.com/toXST2aLEs

Political parties in the opposition and the government continue to trade accusations of who is responsible for the state's low capacity to deal with natural disasters, while Twitter users criticize some politicians for using them as photo ops.

On social networks, many blame ‘the human factor’ for starting of forest fires. Accusations alleging commercial motives point fingers at farmers who, after harvest, burn the stubble on their own fields rather than spending money for transport to garbage dumps—several such cases were prosecuted in previous years.

The usual suspects also include supposedly negligent tourists that flaunt regulations with their open barbeques.

Illegal logging is also a big problem for North Macedonia, and there are allegations that criminal gangs burn down the forest to cover their tracks, or to peruse a loophole in the law which allows the cutting of trees in burned down forests. Another alleged profit motive is picking mushrooms that sometimes grow in the ash after forest fires.

Macedonian society is extremely polarized along party lines, and conspiracy theories about intended sabotage by politically motivated pyromaniacs have flourished, especially allegations related to the supposed ruining of the national holiday Republic Day on August 2. The latter allegation has not been substantiated by police or judiciary action.

The climate crisis is here… from the 2016 flash floods in Singelikj, Stajkovci, Smilkovci and Arachinovo to the wildfires in Kochani, Staro Nagorichane and other places. There's no time to wait. Radical measures against the climate changes must be taken. We are clueless of what awaits us in 5 or 10 years.