Is anti-Chinese sentiment in Kyrgyzstan strong enough to freeze a key Belt and Road Initiative project? 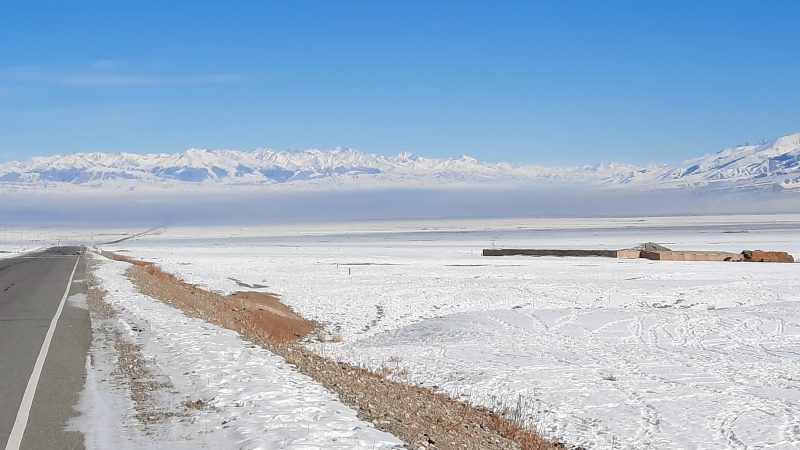 The site of the planned logistics center near At-Bashy. Photo by Aizat Shailoobek kyzy, used with permission.

While foreign investment and infrastructure development often bring material benefits, people in Kyrgyzstan, who often migrate for work to other countries, have pushed back against Chinese projects due to Sinophobic attitudes. What is the basis for this paranoia, and can it in fact stop key Belt and Road Initiative (BRI) projects from being completed?

When former Kyrgyz president Sooronbay Jeenbekov signed an agreement to build a massive trade and logistics center for Chinese goods in Kyrgyzstan during a state visit to China in 2018, two businessmen, one Chinese, the other Kyrgyz, saw an opportunity.

Liu Ying owns twelve businesses in China and is a local business celebrity as he is known as the man who introduced fireworks to Central Asia after the fall of Soviet Union in 1991. His business partner, Emilbek Abdykadyrov, owns Nur Stroi Montazh, a construction company in the capital Bishkek.

In August 2019, the two established a company called At-Bashy Kyrgyz Chinese Free Trade Zone LLC (hereafter At-Bashy FTZ). It was founded through Liu’s initial investment of 500,000 US dollars through the Hong Kong-registered investment vehicle, One Lead One Trading.

The company was created to be in charge of the construction and management of the logistics center. The project, estimated at 280 million US dollars, is to be built in a deserted plateau at 2,000 meters above sea level, around 40 kilometers from the village of At-Bashy, in northeastern Kyrgyzstan, on the main highway to the border with China.

To date, there is little indication that more money beyond the initial half-million dollars has been invested in the plot of land, a 200-hectare space leased for 49 years by At-Bashy FTZ. One Lead One Trading was shut down in November 2020.

The village of At-Bashy, with its population of 15,000, working mostly in small trade, tourism, cattle breeding, and agriculture, is deeply divided about the project. Those in opposition have been the most vocal, and perhaps the reason why the project is stalled.

What seems to motivate this opposition is a combination of nationalism and fear of a Chinese “invasion” and “land-grab.”

Guljan Aitbaeva, who runs a small shop in At-Bashy selling “Made in China” clothes, told Global Voices that ordinary residents were not informed about the construction of the logistics center. She herself learned of it through social networks and is concerned because she sees an echo of what happened in neighboring Tajikistan: “Tajikistan gave a piece of its land to China and this will happen with Kyrgyzstan too.”

In January 2011 Tajikistan agreed to give a part of its territory to China to resolve a century-old border dispute. Kyrgyzstan also reviewed its border with China in 2001 and lost some land in the process.

Using this precedent as a main argument, on 17 February 2020, 1,000 residents rallied against the project. The protest was organized by Mederbek Junusaliev, a local TV repairman, who collected signatures from local residents and appealed several times to the local administration.

Despite pressure from the police to stop his activities, and a stay in hospital caused by stress, Junusaliev continues to lead protests, and even wrote protest poems, inspired by Kalygul Bai uulu, an 18th century Kyrgyz poet who wrote:

The Chinese will occupy slowly

Put the rope around your neck

The connection to historical anti-Chinese sentiment is clear, and extends to other forms of projected fears, including intermarriage, common in Sinophobic discourse in Kyrgyzstan.

To lease land to the Chinese side for 49 years means transferring land forever. Then the Chinese migrants will marry Kyrgyz girls and this will naturally lead to Chinese expansion. Only the Chinese and the Kyrgyz corrupt officials benefit from this logistics center.

Musaev also published a video on Facebook showing the February 2020 protest that was followed with more than 500 sympathetic comments.

While this paranoid fear could be seen as a relic of the past, more Kyrgyz are becoming aware of the eradication of Uyghur culture and identity happening in neighboring Xinjiang province in China, precisely by way of economic development and encouraged or forced intermarriage.

Is lack of redistribution the main reason behind the opposition?

Fear of the effects of Chinese investment is not the only reason why locals in At-Bashy reject the project. Another concern is the likely lack of economic redistribution and endemic corruption, causing opposition to both the central government in Bishkek and to Chinese projects.

Bishkek officials have painted the project in traditional “win-win” colors, in line with Beijing's systematic promotion of the project as a great opportunity to create jobs in a country deeply affected by economic migration and unemployment.

Most Kyrgyz officials, whether from At-Bashy or from Bishkek have strongly supported the construction of the logistics center. At the inauguration in 2019, former prime minister Muhammedkalyi Abylgaziev stated:

The logistics center will become one of the most modern and largest in the Central Asian region. The construction will create at least 10,000 jobs, 90% of which will be given to our citizens.

Abdykadyrov, one of the main investors in the project on the Kyrgyz side, shared a similar enthusiasm in January 2020, telling Delovoy Kyrgyzstan that “we should put our hopes behind the good side [of the project], instead of being afraid or believe in rumors.”

Officials are very much aware of Kyrgyzstan's dependence on the Chinese economy. China supplies Kyrgyzstan and other Central Asian countries with a wide range of affordable consumer goods, from foodstuff to pharmaceuticals, machinery and textiles. Trade turnover between Central Asian countries and China has grown 49 percent in five years, from 17.6 billion US dollars in 2015 to 26 billion US dollars in 2019. According to the United Nations COMTRADE database, in 2020, the volume of Kyrgyzstan's imports from China was 2.9 billion US dollars, almost three times more than imports from Russia in the same period. China also holds the lion’s share of foreign investment into Kyrgyzstan. Almost 50 percent of Foreign Direct Investment (FDI) into Kyrgyzstan originates from China, while around 80 percent of overall FDI goes to gold extraction and other metal industries, according to OECD data.

Against this institutional support, Junusaliev argued in a public gathering that the local administration lacks transparency, because “it is under the control of the central government, which is corrupt.”

Disappointment in Beijing, prudence in Bishkek, and what next?

For China, Central Asian countries represent a key juncture in its BRI plan, as part of an overland transport corridor to Europe. The news of the suspension of construction was received with disappointment, as a roadblock in the integration of Kyrgyzstan in China’s attempts to move goods from China to Central Asia and beyond. China has already built Khorgos, a large, though not the largest, dry port in the world, on its border with Kazakhstan in 2017.

A post on Sina Finance, a financial weblog, exemplifies the disappointment.

It is not hard to see that, due to its geographic location near China, Kyrgyzstan has benefited from Chinese investments, But cancelling the At Bashy project would undoubtedly affect the image of Kyrgyzstan and will deter Chinese investors.

In Kyrgyzstan, the government seems conflicted about the future of the project: on the one hand, Kyrgyz officials have continued to show support for the project after the October 2020 power grab by formerly-imprisoned politician Sadyr Japarov, who became president in January 2021. In June 2021 Japarov visited At-Bashy, and endorsed the project.

Yet Japarov is aware of a serious issue that plays into the claims of the opponents to the logistics center: Kyrgyzstan owes around 41 percent of its external debt to China’s Export-Import Bank. Most of the loans are linked to construction projects and road repairs carried out by Chinese companies. And as he stated publicly:

We borrowed money for these projects and we signed contracts by which the management of the facilities would be transferred to the other party in case of non-payment.