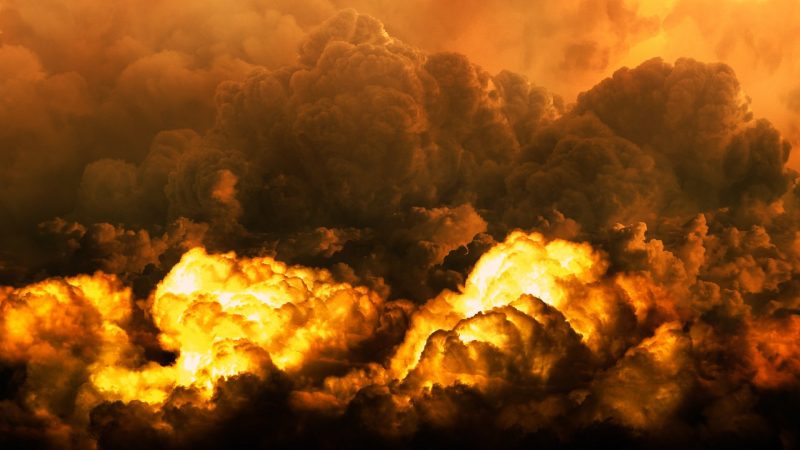 A fire breaking out, from Pixabay [1].

Since July 28, a total of 125 forest [2] fires have raged through 21 provinces of Turkey with 8 still raging as of August 2. The first fire was reported on July 28 [3]. So far, the death toll has reached [4] 8 people, including two firefighters.  [5]While the official cause of the fires is still under investigation, many are attributing [6] them to scorching heat and global warming.

The fires are affecting thousands of residents from Turkey's Mediterranean and Aegean coasts — both major tourist destinations. Tourists have been evacuated [7] and transported to safety as the country's leadership declared some regions “disaster zones [5]” due to the fires. The phrase #HelpTurkey was trending on Twitter on August 1 as people rush to aid those affected by the blaze. As the extent of the damage comes to light, the ruling Justice and Development Party has faced criticism [8] and public outcry for the country's lack of safety measures, emergency plans, and government-propagated conspiracy theories [9].

On Saturday, July 31, President Recep Tayyip Erdoğan visited Manavgat, one of the provinces affected by the fires, where at least 7 people have died from the blaze. During his visit, he vowed that the government was doing everything it could to help people affected by the disaster. “It is our duty to find those responsible for the fires, and burn their lungs,” said [10] Erdoğan on July 31.

But many remained unoptimistic about the government's promises. A large presidential convoy arrived in the city of Marmaris over the weekend — another hotspot affected by the fires — and Erdoğan was seen tossing bystanders packages of tea. Some likened the move to Trump, who threw paper towels [11] at hurricane Maria survivors at a disaster relief distribution center in Puerto Rico.

Erdogan's arrival to Marmaris, where the city has been struggling with fire due to lack of firefighting jets.

Since the start of fires last week, the ruling party has taken flak for Turkey's lack of firefighting aircraft [16] and its choice to exclude [17] the Turkish Aeronautical Association (THK) from the firefighting efforts. For decades, THK had provided planes for firefighting campaigns. Speaking to the residents of Manavgat, Foreign Minister Mevlüt Çavuşoğlu was booed [18] when he said all three of the country's firefighting jets were already extinguishing fires elsewhere. So far, Russia, Ukraine, and Azerbaijan have all contributed planes to help extinguish the forest fires. On August 1, the government finally accepted EU support [19] to receive firefighting jets from Croatia and Spain.

Mursel Alban, a member of Parliament from the main opposition the Republican People's Party (CHP), called on the president and his cabinet to resign:

You have a 300 room summer palace in Marmaris but there is no plane to put out the fire in Marmaris. Erdogan/AKP governmnet must resign with all its ministers.

Photos of Erdoğan's lavish summer house with 300 rooms, a private beach, and a pool, were made public [22] on July 5. The palace reportedly [23] cost 73 million US dollars and was completed in 2019. At the time, the leader of CHP, Kemal Kılıçdaroğlu slammed [23] the summer house during the party's parliamentary group meeting. “People are starving, but he doesn't care. He built a summer palace for himself.”

“While the palace [the presidency] has 13 planes and the agriculture minister travels everywhere in his jet, the government can’t employ a firefighting plane to put out these fires, demonstrating the terrible situation this administration has put us in. One palace plane could have bought dozens of firefighting planes,” pro-Kurdish Peoples’ Democratic Party (HDP) spokesperson Ebru Günay said [24] in a tweet on July 30.

Former member of the parliament Feyzi Isbaran reiterated the sentiment in a tweet:

Erdogan reviewed the area affected by fires from air, sitting inside his super luxury airplane. “The main reason for the problems with the aircraft is that THK, which has been carrying out this task for many years, has not been able to renew its fleet and technology.” Erdogan is the honorary director of the government appointed trustee committee at the THK”.

The THK was reshuffled in 2019 with a government-appointed trustee committee replacing the previous leadership. According to reporting [28] by Dokuz8Haber, an online news platform, earlier this month, the trustees fired 11 pilots and 15 technicians. But the THK's former employees said the association had 6 operational aircrafts ready for deployment. One of the trustees was reportedly [8] at a wedding ceremony when Muğla Mayor Osman Gürün called the THK office asking for planes on July 29.

Following days of forest fires, forests in 6 provinces were closed  [29]from July 30 until August 31. The ban includes going into or near the forests, and having picnics.

Meanwhile, the authorities downplayed the damages caused by the fire in Marmaris describing them as minor, instead prioritizing investigating the cause of the fires according to the Minister of Agriculture and Forestry, Bekir Pakdemirli [30]. “Judicial and law enforcement authorities continue their investigation into the cause of the fires. A statement will be made once important findings are uncovered,” he said.

Echoing the government's investigation efforts, the head of the Directorate for Communications, Fahrettin Altun said [31],  “Those responsible will have to account for the attacks against nature and forests.”

Many have compared the ineptitude of the ruling government to a recent flood in Germany, where Chancellor Merkel allocated [32] 472 million US dollars worth of aid for the flood victims a stark contrast to convoys and tea throwing as seen during the president's visit to affected areas. So far, officials have promised to postpone [30] loan payments of those injured in the fire to ease their financial burden. They have also announced they [33] would accept donations. Which triggered further criticism online.

They ask for donations after an earthquake, flood, fire, during the pandemic. Of course we will do what is in our power to help those in need, but will those who collect our taxes and lead us do the same?