Hundreds gathered for the protest, despite threats of arrests 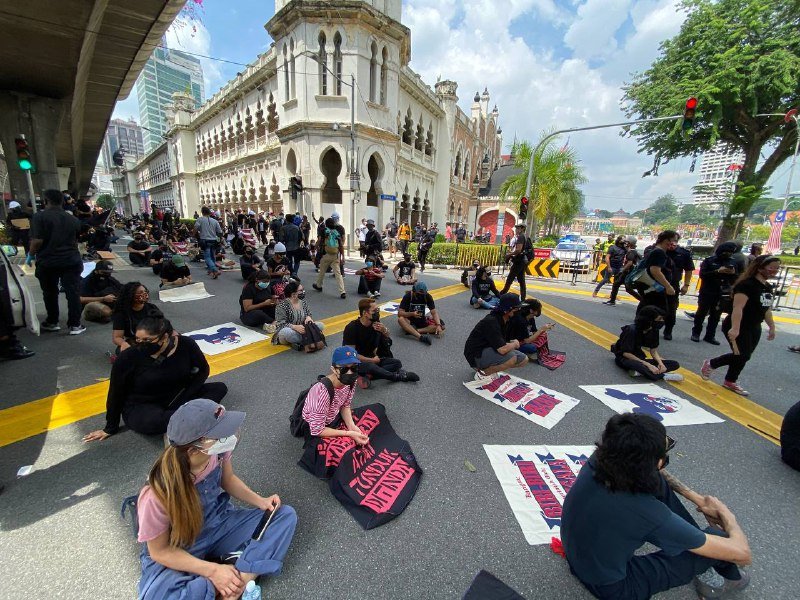 Activists hold a sit-in protest during the #Lawan rally in Kuala Lumpur, Malaysia. Photo from Twitter post of Centre for Independent Journalism

Hundreds of activists marched in Malaysia's capital Kuala Lumpur on July 31 to demand the resignation of Prime Minister Muhyiddin Yassin over his government’s handling of the COVID-19 pandemic.

Themed #Lawan (Fight), the protest was also held to demand the resumption of parliamentary sessions and a moratorium on the repayment of all loans. The Muhyiddin government is accused of using the pandemic to suspend parliament in order to consolidate power and relying on draconian regulations to silence and intimidate critics.

#Lawan has attracted broad support as it echoed the frustrations of many Malaysians over the government’s pandemic response.

Authorities summoned at least 20 activists last week, ahead of the planned #Lawan protest. This included youth activist Sarah Irdina who had been arrested on July 29 under the draconian Sedition Act for tweeting about the protest. She was released after a few hours and described her ordeal on Instagram.

With nothing but the walls of my cell and my thoughts I kept asking myself: what would happen to me after this? What would happen if the police refused to release me tomorrow? Would I be able to continue my studies? Would my life ever be the same again? What did I do that was so bad that I deserve to go through this?

This failed government's inhumane treatment of those that fight is for a better Malaysia is what keeps hurting us Malaysia, when their job is supposedly to protect us. This is why we LAWAN.

The #Lawan protest was carried out peacefully, despite threats of arrests. Most of the participants were young activists, and they wore black shirts and carried black flags to symbolize the government’s failure in dealing with the public health crisis.

Social distancing was practiced during the march:

The march was supposed to end at the historic square Dataran Merdeka but the police placed barriers in the street to close it off:

#FOEMonitor 10.13am – Police barricading entry points to Dataran. Many in plainclothes, some in vests. Protestors observing SOPs are continuing to march. Police should facilitate, not obstruct. #FOA #Lawan pic.twitter.com/Y4TFcI1Odc

This forced #Lawan organizers to hold a sit-in protest instead:

#lawan protestors sit on the road at the Jalan Raja intersection as Dataran Merdeka is cordoned off.

After the singing of the national anthem (Negaraku), protesters called for the resignation of the prime minister

After Negaraku #LAWAN calls for @MuhyiddinYassin to step down pic.twitter.com/Lm4BARvr2u

The Human Rights Commission of Malaysia (SUHAKAM) noted the importance of observing health protocols but it also castigated the police for arresting organizers before the protest:

Whilst understanding the complexity of the situation, SUHAKAM, however, expresses its concerns over the arrest of organizers and the activists of a planned assembly whilst their belongings were confiscated by the police.

SUHAKAM urges the authorities to facilitate the peaceful assembly by providing an adequate space at an appropriate location for the assembly to take place, thereby enabling physical distancing and health screening of the participants to be conducted safely.

Dear parents of #Lawan activists, I know you fear for their safety. But they’re doing this for all of us. We should applaud them for their courage. Don’t worry, you’re not alone. We’re all standing in solidarity with them. #LawanIntimidasi

The organisers of this protest consisted of many young people, and we commend their passion and dedication for our country, as well as their capability in organising this peaceful protest, despite the continuous threat of investigation, arrest and detention.

The groups also called on authorities to stop harassing the organizers. The police authorities have said they will summon several activists because the protest is a mass gathering which is currently prohibited because of the pandemic.