Threats followed reporting on probe into the 2019 Easter Sunday killings 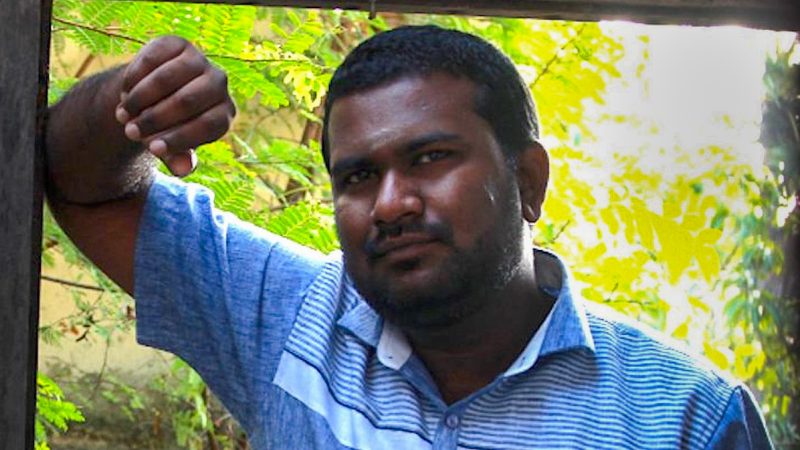 This post by human rights activist Ruki Fernando originally appeared in Groundviews, an award-winning citizen media website in Sri Lanka. An edited version is published here as part of a content-sharing agreement with Global Voices.

Tharindu Jayawardhana is one of Sri Lanka’s most outstanding and promising young journalists. His writings and MediaLK, the bilingual news website he founded in 2019, are noted for highlighting some of the most critical injustices and rights violations faced by numerous ethnic minorities in the country, such as Tamils and Muslims. But concerningly, Sri Lanka’s Ministry of Mass Media is currently refusing the registration of MediaLK because of a lack of clearance from the Ministry of Defense.

The complaints are not only about concern for a respected and brave young journalist known for uncovering important stories but also in terms of the greater implications for freedom of expression when journalists can be intimidated and threatened (as Tharindu has) for reporting in the public interest.

Tharindu began his journalistic career at the popular daily newspaper Lankadeepa where he wrote detailed features on the environment, corruption and human rights. Together with another colleague, he also wrote controversial exposés in the column Investigating the Truth. He is well known for his extensive use of the Right to Information (RTI) and won a special award for utilizing the RTI Act for public objectives and the wellbeing of society; this was at an event celebrating international RTI day organized by the Ministry of Mass Media. He also earned an award for the best feature using RTI and Scoop of the Year at the Editors Guild of Sri Lanka awards. A published book author, Tharindu has documented the community struggle for water in Rathupaswela and the killing of three people during a protest in 2013.

As a founding member, former secretary and presently, an executive committee member of the Young Journalists Association, Tharindu has been at the forefront of raising issues of freedom of expression, arbitrary detention, torture and the right to a fair trial, regularly engaging with statutory institutions such as the Human Rights Commission, including lodging public interest complaints on matters where police are accused of human rights violations.

Catalysts for the recent threats?

Tharindu began facing the first of a series of intimidations following his reporting on the Presidential Commission of Inquiry probing the 2019 Easter Sunday bombings after the inquiry found that a Senior Deputy Inspector General of Police (SDIG) Deshanbandu Tennakoon had not fulfilled his duties during the attack, and recommended a disciplinary inquiry.

On June 29, MediaLK published its report that a Special Police Investigative Division appointed to investigate police negligence in relation to the bombings had recommended several senior police officers be charged, including SDIG Tennakoon. The minister in charge of police confirmed at a press conference that the Public Services Commission had forwarded the charge sheets. The MediaLK report also mentioned that Tennakoon was among those the Cabinet had approved for a special salary increase, despite disciplinary steps being recommended against him by the Presidential Commission and the Special Police Investigation Division. The report was based on responses to questions posed by Tharindu at press conferences on June 18 and 29.

It is thought that some of Tharindu’s earlier reporting that month might have been the catalyst for threats that were to follow. Just a few weeks earlier, on June 9, Tharindu had posted photos on Facebook of a gathering, which included the Prime Minister, at the funeral for a family member of a prominent Buddhist monk at a time when COVID-19-based restrictions on travelling and gatherings were in place. As this had happened in the western province headed by Tennakoon, the journalist tagged the SDIG’s Facebook page and posed a series of questions. While the SDIG did not respond to the questions on the platform, he asked Tharindu to phone him, providing a mobile number. But despite repeated attempts to connect with the SDIG, Tharindu got no answer.

On July 1, MediaLK published another investigative report about a senior police officer and former director of the Criminal Investigation Department, Shani Abeysekera, who had retired on June 30, after a career of 35 years. Abeysekera had been in detention for about 10 months, having been arrested for allegedly fabricating evidence, and had been released on bail a few days before, on June 16. The arrest and detention had led to widespread condemnation and expressions of concern, including by the Appeal Court, the Human Rights Commission of Sri Lanka and the European Parliament. The arrest was made by the Colombo Crime Division (CCD) of the police, overseen by Tennakoon.

Tharindu shared the report on Facebook the same day and within about half an hour, a tirade of comments from Tennakoon began to appear on the post. Most of the SDIG’s comments accused Tharindu of writing and publishing false news. On several occasions, the journalist responded to the comments, requesting information about any falsehoods and offering corrections where needed. Other journalists and lawyers also requested the SDIG provide information about any falsehoods contained in the report. No specific instances were pointed out.

Among the threats made to Tharindu was that he would be punished by “natural justice.” In another, the SDIG likened Tharindu to Velupillai Prabakaran, leader of the Liberation Tigers of Tamil Eelam (LTTE) and criminals. This is a serious threat, considering that Prabakaran was killed by the Sri Lankan army at the end of the 30-year civil war and two alleged criminals were killed in police custody in May this year. At least 10 other people are reported to have been killed in police custody in the last 12 months.

After the threats, Tharindu wrote a letter to the Inspector General of Police (IGP), requesting protection for him, his family and those close to him, to ensure their security. He also requested the IGP guarantee his freedom to carry out his professional work as a journalist and to investigate the threats made in the online comments. The Media Organizations Collective (six media freedom organizations) has also written to the IGP demanding guarantees for Tharindu’s safety and a formal inquiry into the threats. Opposition political parties, including the Opposition leader, also expressed concern through public statements and interventions in parliament.

It is important to note that the SDIG has the second most senior position in the police force. As such, an SDIG publicly making threatening remarks against a respected, award-winning and well-known, independent journalist and getting away with it is likely to have a chilling effect on many lesser-known journalists.

If SDIG Tennakoon is not held accountable, this will only encourage more predators of free expression. For other journalists, it could lead to more self-censorship. The journalistic community and all those whose right to information is at stake must rally in solidarity with Tharindu and others who face reprisals for exercising the right to free expression.