The Georgian Dream Party withdraws from EU-brokered deal with opposition

Opposition and civil society claim the decision was political 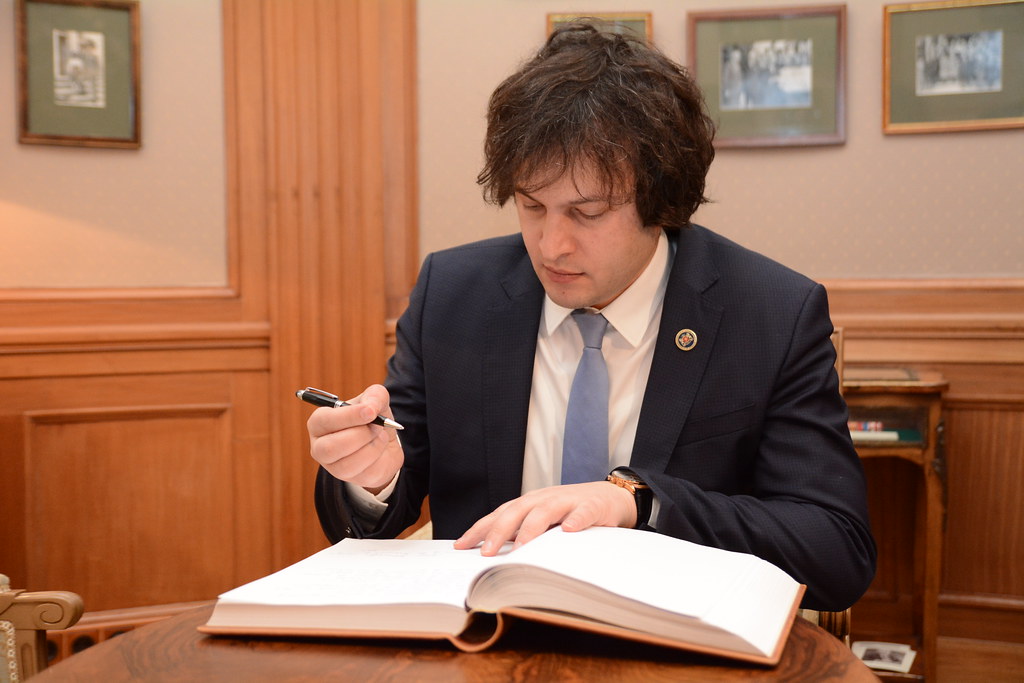 “E. Rinkēvičs meets with the Speaker of the Georgian Parliament Irakli Kobahidze” by Latvian Foreign Ministry is licensed under CC BY-NC-ND 2.0

This article was first published on OC Media. An edited version is republished on Global Voices under a content partnership agreement.

Georgia has been engulfed in a political crisis since October 2020, when opposition groups contested the results of parliamentary elections won by the ruling Georgian Dream Party. The contesting parties reached an agreement on April 19, 2021, with mediation from the United States and the European Union. In a July 28 press briefing, the Georgian Dream Party announced its decision to withdraw from the agreement.

Speaking to members of the press, the party chair, Irakli Kobakhidze said, “Today, 100 days after the signing of the document, it is clear that it has fulfilled its mission and reached its limits.”

In the withdrawal announcement, Kobakhidze said they would call new elections if they won less than 53 percent of the vote in the upcoming elections, but only if they saw a possibility of a coalition government “based on the behavior of the opposition.” He added that the decision was an act of “goodwill” by the Georgian Dream Party.

Rising tensions with the West

Since the deal was signed in April, the government has come under increasing pressure from the EU and US over their apparent failure to implement the agreed-upon provisions as well as criticism over its handling of homophobic riots earlier this month.

While the agreement explicitly stipulates that judicial appointments should be paused until reforms are carried out, the government has proceeded with controversial lifetime appointments to the Supreme Court.

On June 23, The US Embassy in Georgia tweeted that the Georgian Dream party was not meeting its commitments to making “inclusive” judicial reforms.

In another statement issued on July 29, the US Embassy to Georgia said:

The United States is deeply disturbed and exasperated by the unilateral decision of the Georgian Dream party to withdraw from the April 19th Agreement, a document established through six months of difficult but collaborative negotiations, and one that gives an urgently-needed way forward for the Georgian people and their democracy.

In his remarks, Kobakhidze hit back at Western critics. “Although more than half of the opposition MPs have not yet signed the agreement, we see that our international partners do not consider it necessary to urge the radical opposition to sign the document and participate in its implementation,” he said.

He also insisted that judicial and electoral reforms would go ahead without any political agreement.

Khatuna Samnidze, chair of the Republican Party, said that the Georgian Dream Party's statement was a rejection of Europe and the United States. Other members of the opposition such as Zurab Japaradize, leader of the opposition party Girchi — For Greater Freedom, said, “They realized that they have a zero chance of getting the 43 percent,” in an interview with Interpressnews.ge.

Some 18 local civil society organizations issued a statement on July 28 criticizing the withdrawal and describing it as a political move:

The decision of Georgian Dream is a way to deepen the pre-election political crisis and polarization and only serves a desire to retain the power, for which the “Georgian Dream” is ready to sacrifice the country's prosperity, Western orientation, democratic development and friendly relations with strategic partners.