The essence of LeRoy Clarke, Trinidad and Tobago's master artist who died this week

'His [was] a life of extreme self-consciousness' 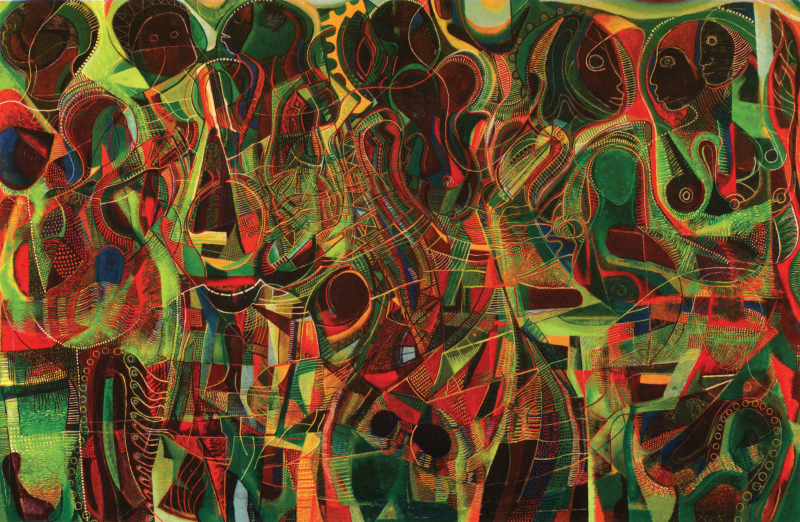 A Prophetic Flaming Forest by LeRoy Clarke, 2003. Photo courtesy The Lloyd Best Institute of the Caribbean, used with permission.

Editor's Note: On the morning of July 27, 31 years to the day that Trinidad and Tobago faced an attempted coup d'etat, the country experienced a different type of loss with the death of celebrated master artist LeRoy Clarke. He was 82 years old.

Known primarily for his vibrant and intricately detailed paintings, Clarke, dubbed “The Chief” (he was an elder of the Orisha community), was also a prolific poet, publishing several books over the course of his long career.

At the heart of his inspiration was a deep and tender vision of everything the Caribbean had the potential to be—a vision rooted in his expansive knowledge of the region's history and culture, propelled by his unending drive for excellence. His work is spiritual, passionate, deliberate, and pioneering, guided by an inner desire to know, understand and make connections, rather than by any external desire for acclaim, though he achieved that too, and on his own terms.

His legacy is assured, and Clarke's commanding voice is present even in his family's official notice of his passing, which began, “Chief Ifa’ Oje’ Won Yomi Abiodun, wishes to announce that he has transitioned to the realm of the ancestors.”

Trinidad and Tobago journalist Sunity Maharaj wrote about his incredible contribution to the art world, in a piece of writing that Clarke used as the foreword in two of his books, PARables of our Joyless Days and Eye Haiti…Cries…Everywhere. It captures the essence of LeRoy Clarke. Maharaj has graciously allowed us to republish it here:

The art of LeRoy Clarke

LeRoy Clarke is because he dares to be.
The child who Yemanja [Orisha Mother of Oceans and of all Orishas] had risen to save from a watery grave has repaid her mercy many times over by a relentless insistence on living and being. At four score and counting, and with his mind now firmly committed to epitaph writing, LeRoy Clarke has never been more present in his life, nor have its strands been less dissonant as the pattern of a unique tapestry begins to emerge.

His is a life of extreme self-consciousness. Every toe placed, every finger raised, every word uttered are as precise and as deliberate as the tiniest dot perfectly placed between two tightly drawn lines on his canvas. 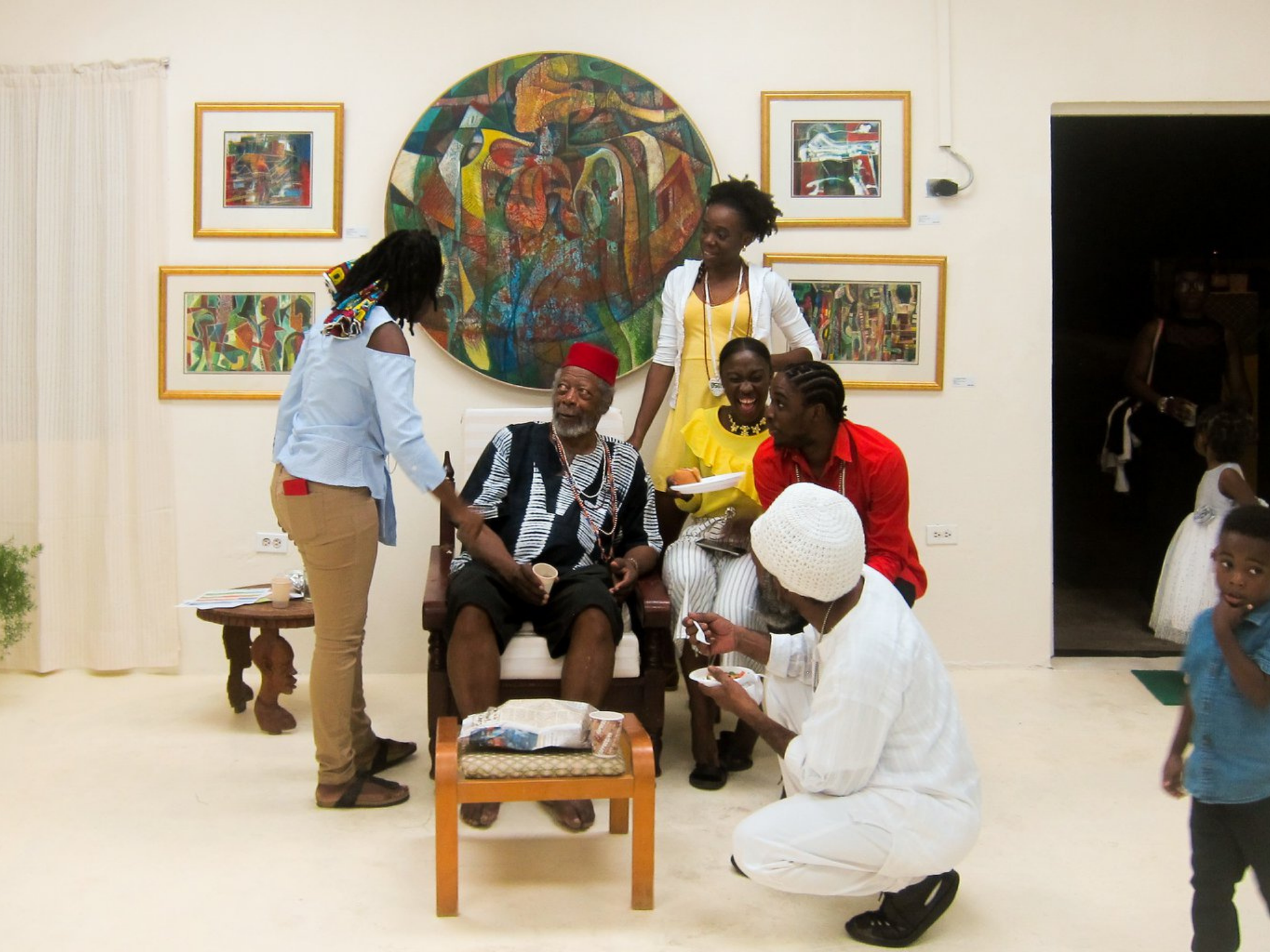 LeRoy Clarke surrounded by his art and admirers at his 2019 exhibition, The Art of Obeah. Photo courtesy The Lloyd Best Institute of the Caribbean, used with permission.

The art of being LeRoy Clarke is a discipline, cultivated by an artist equally inspired and terrified of the society that has hammered his art into existence. He is who he is because of who we are. His painstaking precision, punctilious imagery, raw emotion
and opinionated extremism are his responses to a society that he finds too casual, too unspecific, too cosy with mediocrity and too quick to release the nervous laughter of un-negotiated acquiescence. He is uncomfortable with our in-betweenity and rejects our preference for living in the grey. In his artist’s quest for truth, the clarity of certainty is what he seeks. In Eye Haiti: Cries Everywhere, he has finally worked his way to the stark, indubitable clarity of a world designed in black and white.

LeRoy Clarke is in every respect his own creation and his own work of art. He has crafted his own purpose-built language, invented his own philosophy of art, designed his own image and set the rules of his own house. For better or worse, he answers to no one, neither does he surrender the right to value himself or his work. As the commander of his soul, he reserves the right to set his own price in the transactions of his life.

In a world schooled to manage difference and keep defiance in check and where conformity and un-responsibility abide comfortably in the same house, LeRoy Clarke is an anomaly of rage with ceremony and defiance wrapped in ritual.

Even if we can open our minds, it will take time, first, to understand and then to come to terms with the phenomenon of LeRoy Clarke. In the meantime, let us cherish him.

Journalist Sunity Maharaj is a director of The Lloyd Best Institute of the Caribbean, a non-profit organization based in Trinidad and Tobago “dedicated to realising the potential of the Caribbean.”