Journalists continue to face harassment and attacks from government officials 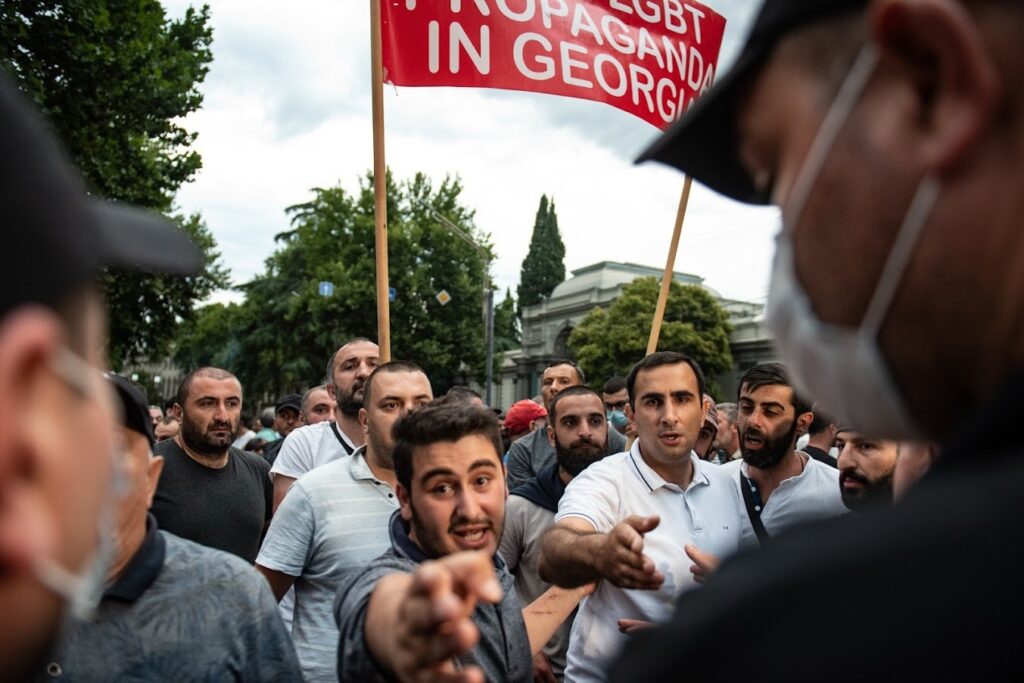 In Georgia, independent journalists continue to face harassment and attacks from government officials ever since July 5 when a Pride march in Tbilisi was canceled after violent riots by anti-Pride groups. The most recent spat involves reporter Ema Gogokhia, from an independent TV channel Mtavari, and Georgia's Minister of Culture, Tea Tsulukiani.

The opening ceremony was organized by the Cartu Foundation, founded by Bidzina Ivanishvili, the former Prime Minister of Georgia and founder of the ruling Georgian Dream party. Tsulukiani, is known as one of Ivanishvili's oldest allies. After grabbing the microphone, the Minister publicly teased and mocked Gogokhia.

This episode occurs just a few weeks after 53 journalists were attacked and injured while covering the “March for Dignity” on July 5. One journalist, Aleksandre Lashkarava, a camera operator with Formula TV who was severely beaten during the riots, died in his home several days later. Hours after Lashkarava's death, Georgian authorities baselessly insinuated that it may have been caused by a drug overdose, not by the severe head injury he sustained during his beating.

Despite numerous condemnations locally and internationally, the Georgian Dream party has insisted that police did everything they could to defend journalists.

Tbilisi Mayor Kakha Kaladze, the most popular public figure currently in  Georgia's government according to a recent poll by the International Republican Institute, added to the anti-media rhetoric.

In a July 20 speech about his mayoral re-election campaign, Kaladze spoke up about the recent violence. “All those who on July 5, did not spare you, hit you, and engaged in violence, damaged the progress of the country and our future,” he said, referring to the anti-Pride protestors.

But as he condemned the violence, Kaladze also referred to Georgian TV news programs as “psychological violence” which he believed was “equally evil” to the physical violence of the homophobic mob.

“The Georgian authorities should very clearly and unequivocally condemn the attacks on members of the press. Sending mixed messages usually puts journalists at additional risk,” Gulnoza Said, the Europe and Central Asia Program Coordinator at the Committee to Protect Journalists, told OC Media.

“Georgian authorities should investigate the attacks against every single journalist and hold all perpetrators to justice,” she added. “We hope to see a thorough, transparent and swift investigation into the death of Aleksandre Lashkarava. The international community is watching very closely.”

So far 28 individuals have been charged over their alleged role in the July 5 riots, 24 of them for assaulting journalists. No rally organizers, including those who were filmed calling for violence, have faced any charges.

Following the funeral of Aleksandre Lashkarava, numerous Georgian media organizations — including TV companies Pirveli, Formula, and Mtavari —  demanded the resignation of Georgian Prime Minister Irakli Gharibashvili and held protests opposing the ruling Georgian Dream party both on the streets and inside parliament.

During the Georgian Prime Minister's question and answer sessions with the media, journalists have been repeatedly asking him, “When do you plan to resign?”

Nino Zuriashvili, Georgian journalist and the head of the Studio Monitori investigative project, admitted that journalists calling on the government to resign is indeed extraordinary but that these are not ordinary times. Zuriashvili told OC Media:

Knock at any newsroom today in Georgia and you’ll find one or two journalists with bruised faces or injured hands or legs. These wounds have not healed yet. I do believe that if not for July 5, Lekso [Aleksandre Lashkarava] would have been alive today.

In response to mounting calls for government resignation by media groups, the Georgian Dream leaders have not only rejected claims that they mismanaged public safety during the protest, but have even begun a boycott of several major news networks.

The Prime Minister’s office refused to allow journalists from Mtavari, Formula, and Pirveli to cover Gharibashvili's July 17 visit to Georgian troops and their families at a military housing project in Tbilisi on the grounds that the media had “crossed the line” and participated in politics instead of reporting the news.

The following day, a large number of journalists, who said they had received accreditation to report at the parliament, were barred from entering the building during a parliamentary hearing. The government eventually canceled the hearing and blamed the opposition.

On July 20, Tornike Rizhvadze, the chair of Georgia’s Autonomous Republic of Adjara, demanded that journalists “behaved” if they wanted to regain access to his cabinet meetings.

Speaking with OC Media, veteran journalist Nino Zuriashvili noted that the authorities have more than enough avenues at their disposal to respond to criticism, even if they think the criticism is unfair. Indeed, Zuriashvili is among the first to admit Georgian media is both polarised and politicized.