[Harassment] 'is a widespread and ubiquitous issue' 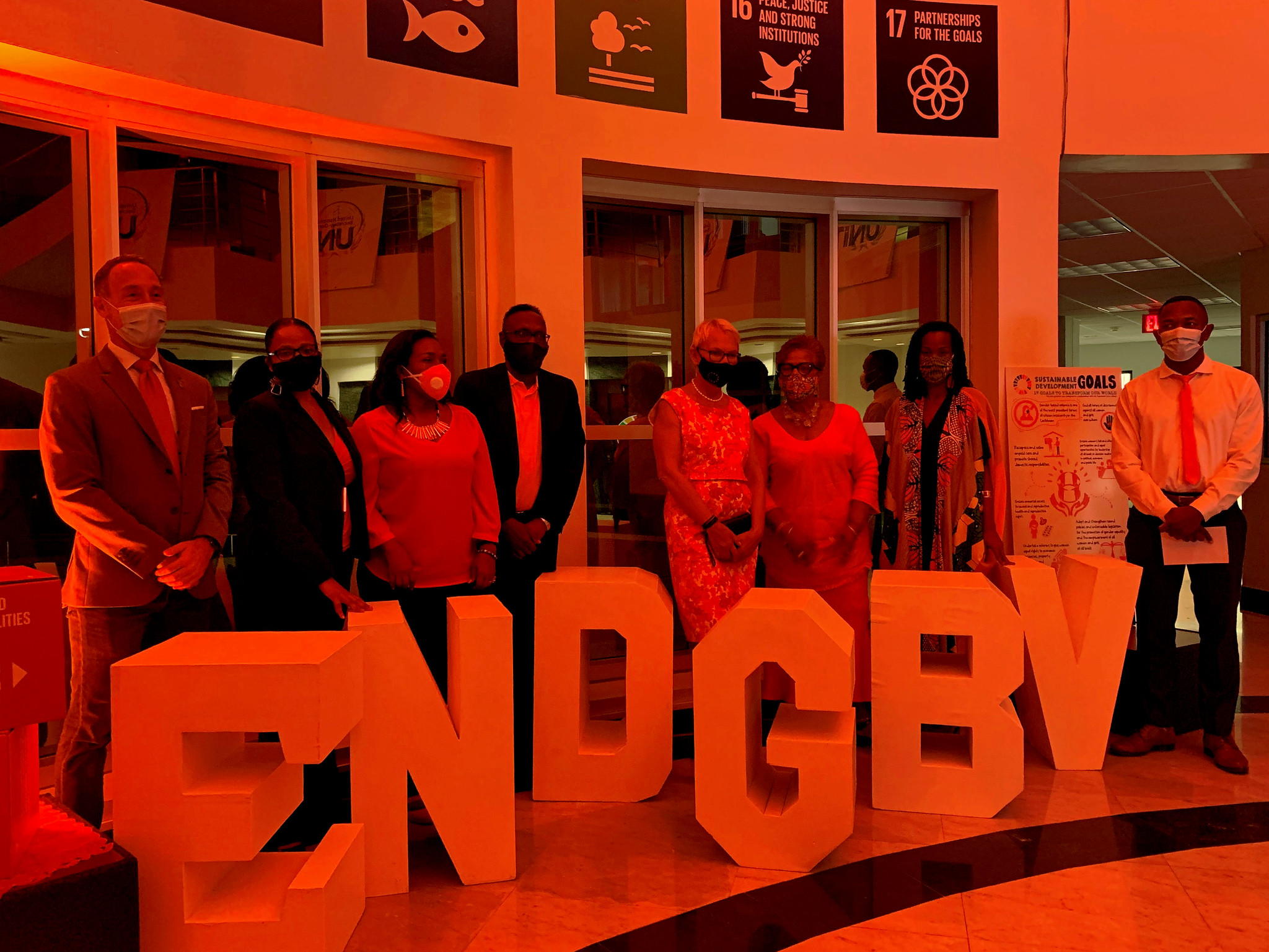 Set among the tall palms and lush vegetation of Barbados’ South Coast, United Nations House is illuminated in an orange glow to draw attention to the issue of gender-based violence, as part of the annual commemoration of the 16 Days of Activism and the International Day for the Elimination of Violence Again Women. Photo by UN Women/Younes Hosney on Flickr, CC BY-NC-ND 2.0.

In the midst of the COVID-19 pandemic, working remotely from an idyllic Caribbean island might seem like an offer you can't refuse, but after four and a half months of living in Barbados as part of the country's progressive Welcome Stamp visa, Hong Kong-based freelance journalist Andrea Lo decided it was anything but, thanks to the country's culture of street harassment.

Lo wrote an article about her experience, which is getting a lot of regional attention since many other Caribbean nations have similar issues. In it, she talks about several incidents that made her feel unsafe since she arrived in Barbados in December 2020, and which contributed to her decision to cut her time in Barbados short, despite the island's many advantages:

I was struck by the beauty of Barbados, from the azure shades of the Caribbean Sea to the rugged landscapes of the east coast facing the Atlantic. […]

I also loved learning about Barbados culture. I had the privilege of enjoying a private cooking demo of fried flying fish with cou-cou (corn flour and okra) and sauce–the national dish of Barbados. It was also fascinating to hear conversations in Bayan Creole and learn Caribbean slang.

The culture of street harassment, however, would soon take its toll. Lo described it as more difficult to negotiate than COVID-19 lockdowns and the volcanic ash that held Barbados in a stranglehold after the intense eruptions of St. Vincent and the Grenadines’ La Soufrière in April 2021:

Although street harassment is not unique to the island, I had never felt as fearful and vulnerable as I did in Barbados
Catcalling happened almost every time I left the house. […]
This ranged from one man saying he wanted to ‘put his aloe vera on me’ while I was taking pictures of the beach to another yelling, ‘Leave this prey alone!’ when I adjusted my shorts while walking.

I knew catcalling was happening in Barbados and the local women assured me that it was largely harmless. And at first I tried to laugh about it.

But as I continued to explore my new home on my own, I saw more incidents that filled me with fear.

I was warned that solo women on the beach could attract unwanted attention. Once a man was sitting next to me trying to have a conversation. I gave him one word answers before finally ignoring him. He sat and stared at me in silence. When I pretended to pack and leave, he left.

Such interactions left her feeling “increasingly paranoid and withdrawn” as she sank “deep into a rabbit hole of panic and despair.” Lo says she carried a rape alarm and a Swiss Army knife with her wherever she went, and even wore a “fake wedding ring” in an attempt to divert unwanted attention. What surprised her, she said, is that none of her research prior to the move hinted at the pervasiveness of this type of pestering:

Some friends in Barbados speculated that the excessive attention was due to my being an Asian with pink hair.

Local women said to me, ‘But that’s how Caribbean men are.’ One said if I wanted to live in the Caribbean I would have to accept that.

However, Caribbean women have been standing up and speaking out against verbal molestation and other forms of gender-based abuse for years now. In 2016, the #LifeinLeggings hashtag, created by two Barbadian women as a way to give women a voice—and a space in which to share their stories of sexual harassment—resonated throughout the region as it underscored the extent to which sexual harassment is ingrained in the collective regional culture.

Other regional initiatives working against gender-based violence include Jamaica's Tambourine Army and the hashtag #LeaveMeAlone, taken from a song by Trinidad and Tobago's Calypso Rose, which activist Attillah Springer used as a mechanism to have discussions about gender-based violence in the context of the country's annual Carnival celebrations. Both movements were started in 2017.

For Lo, the last straw was an incident that took place as she was walking to her neighbourhood supermarket one afternoon:

The streets were empty. A man drove by and stopped next to me. He said he was selling beach chairs and then he told me to get in the car.

He became aggressive: ‘I’m trying to get in touch with you, but you don’t care about me.’

‘Don’t you want a husband?’ He asked. I said no and he drove off. But I froze in fear, too panicked to write down his license plate.

The property manager at Lo's apartment complex reported the incident to the police, though as far as Lo is aware, “the driver was never caught.” It was only after this experience that Lo learned about Ronelle King, the co-founder of #LifeinLeggings, who “was on her way to the capital Bridgetown in 2016, when a man offered her a ride. She refused and he tried to drag her into the car.” King explained:

Harassment of women and girls in Barbados is a widespread and ubiquitous issue […] one of those crimes that has been normalized as ‘part of culture’, trivialized to be considered a masculine way of showing their interest in a woman they are attracted to.

It is an aspect of the Barbados reality that is at cross-purposes with Prime Minister Mia Mottley's statement on the Welcome Stamp website, which promised visitors “safety and security” in this “ideal place to live, for both singles and families.”

Lo says her decision to return to Hong Kong was one that filled her with “enormous relief,” though she wondered what she might have done differently:

Maybe I was stupid to move to a place I’d never been to. As a woman, I would not have gone there alone if I had known the reality. Sometimes I wonder if I should have done that at all. So much of what happened was completely unexpected.

This tendency for women to second guess themselves is the very thing that Caribbean feminists are trying to change as they advocate for proper socialisation of boys and for men—whether they be ordinary citizens or regional celebrities—to take responsibility for their actions and make the necessary changes.