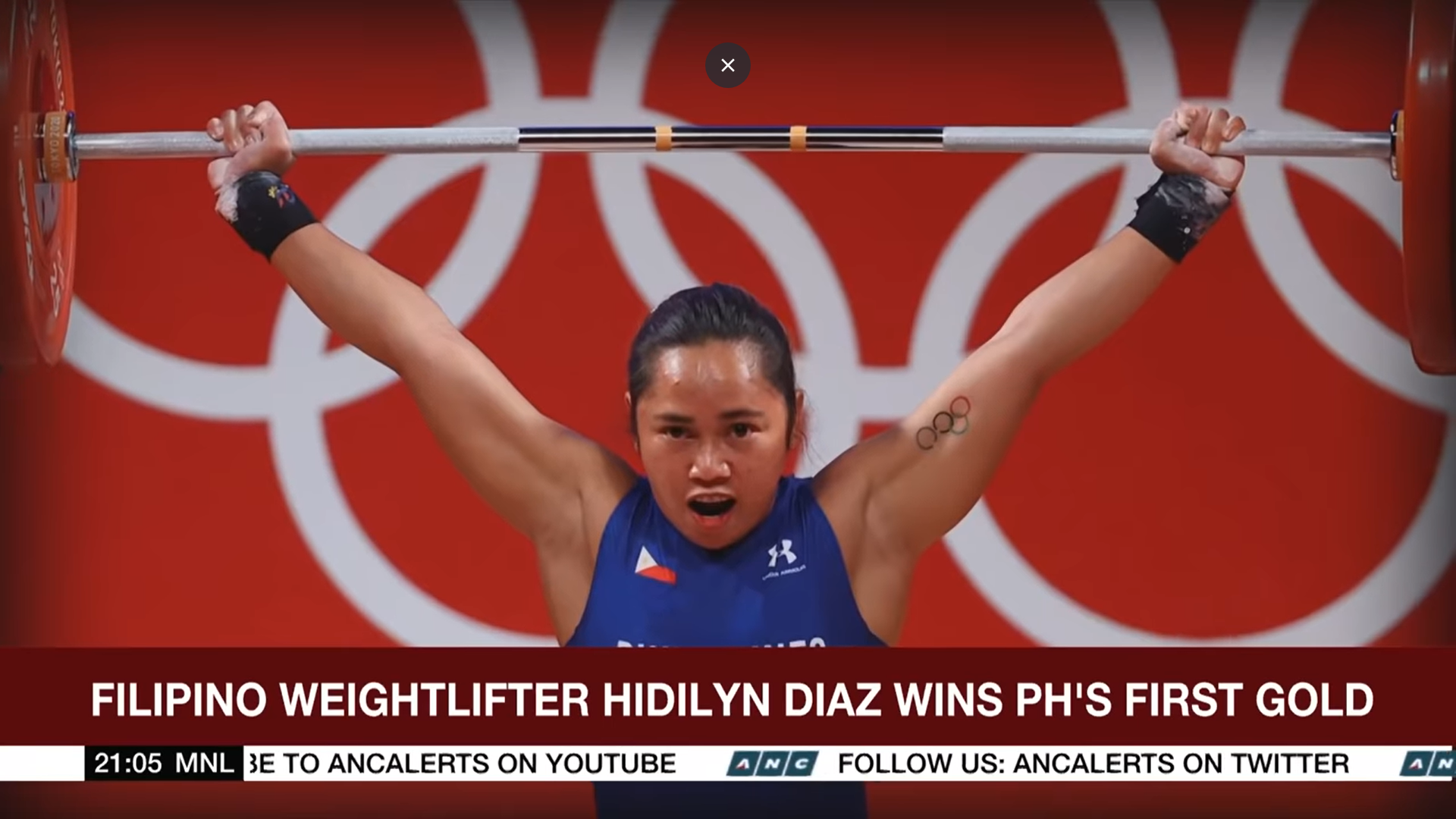 A screenshot from local news coverage by ANC News.

Weightlifter Hidilyn Diaz inspired Filipinos all over the world by winning the Philippines’ first-ever Olympic gold medal. Diaz took first place in the Weightlifting Women's 55-kilogram category group A during the 2020 Tokyo Summer Olympics on July 26, 2021.

In the wake of this historic victory, Philippines President Rodrigo Duterte and government officials lined up to wish Diaz congratulations, with one official even calling her a “national treasure.” However, citizens quickly took to Twitter to remind the public of the government's previous hostility toward the Olympic gold medalist, noting that she was once “red-tagged,” meaning she was falsely accused by authorities of being involved with communist rebels.

The Duterte government alleged the 30-year old athlete was involved in a destabilization plot in 2019 after she took to social media to solicit financial support for her 2020 Tokyo Summer Olympics bid. She was even added to a matrix of organizations and individuals labeled as “enemies of the state.”

Hidilyn Diaz was maliciously tagged in Duterte ouster plot after she voiced the extreme lack of support for athletes in the Philippines. THIS IS A POWERFUL AND SYMBOLIC WIN— and a huge F U to a gov’t that lets its people down AND that looks down on women.pic.twitter.com/aGasvJp6c1

Diaz’s predicament was emblematic of the Philippine state’s perennial lack of sports funding.

The Duterte government's “ouster plot matrix” has been widely criticized for shrinking democratic spaces for dissent, wherein even ordinary individuals voicing out concerns on social media are tagged as either members or supporters of “communist” and “terrorist” groups.

The president's spokesperson deflected calls for a public apology to Diaz by denying that the Duterte government ever released such a matrix.

Hidilyn Diaz was underfunded by the government.

Worse, she was red-tagged when she was placed at the “Red October” plot matrix by the Duterte regime, which was proven to be a hoax.

She was harassed due to this, but braved through. Now, she carries the first gold medal for PH. https://t.co/IhI7BVzVbh

Her victory stole the limelight from Duterte’s State of the Nation Address (SONA). The 2 hour and 15-minute speech mainly rehashed the president’s talking points against drugs, communists, and critics while barely mentioning the country’s COVID-19 pandemic and worsening socio-economic crisis. Defying police blockades and threats of violence, thousands marched in protest against Duterte's SONA in the national capital and other major cities in the Philippines.

In his 2021 SONA, Duterte also called on the police and military to shoot communists on sight emphasizing that this will make him happy.

On the day of his last SONA, a woman unfairly included in the drug matrix wins the first Olympic gold medal for the Philippines. Coincidence or a foretelling? The last man standing is a woman.

Thank you Hidilyn Diaz for giving us a reason to be proud to be Filipinos today. ??

It cannot be overstated that Hidilyn Diaz, who brings us all so much pride and honor, has been red-tagged and attacked by the administration for speaking out on injustice, so it's just poetic she won the gold on Duterte's last ever SONA.

Rise above the evil. https://t.co/uXuiBQoCZe

In the wake of Duterte’s longwinded and lackluster speech, Diaz’s Olympic gold medal win is a much-needed victory for Filipinos fed up with the Duterte administration’s incompetent pandemic response and intensifying attacks on democracy.