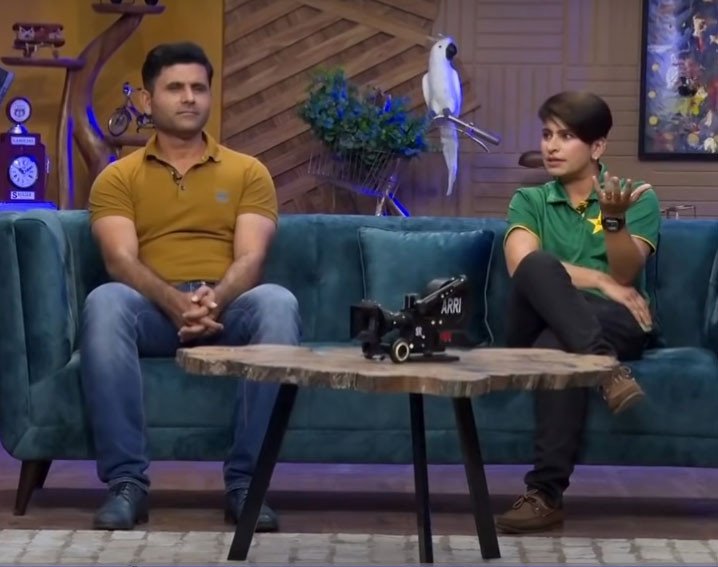 Screenshot from the interview of Abdul Razzaq and Nida Dar from the YouTube version of the G Sarkar with Nauman Ijaz show. Fair use.

Cricket is the most popular game in Pakistan and the Pakistan Cricket Board (PCB) is trying to grow awareness of the game among young women in Pakistan. In general, Pakistani women have to overcome many challenges when they enter sports, as they face inequality and discrimination from their patriarchal society. A recent sexist comment on a woman cricketer by a former cricketer turned coach on a TV show has created controversy in Pakistan, revealing that even empowered role models are not spared.

Former Pakistan cricketers Sharmeen Khan and Shazia Khan are deemed the pioneers of women's cricket in Pakistan. In 1996, the sisters helped secure  International Women's Cricket Council membership for Pakistan, enabling its women's team to start playing international cricket in the following year. In 2005, the PCB established a women's wing to oversee all cricket affairs under the PCB's control.

While the Pakistan women’s team might not have broken any records, it has had a fair share of success—winning the Asian Games gold twice and producing legends of the game such as Sana Mir, Bismah Maroof, and Nida Dar.

The PCB, in March 2019, appointed an all-women national selection committee for the first time. Marina Iqbal became the first Pakistan women cricketer to turn commentator in 2018; Urooj Mumtaz, former captain and a successful dentist in Karachi, is not only the chair of the women’s selection committee but also has served as the acting head of women's cricket. Sana Mir is an iconic figure when it comes to women's empowerment and women in sports in Pakistan. Despite these notable achievements as a society, the acceptance of women's cricket and women cricketers has not reached the level at which it should be. Women cricketers are the targets of a negative attitude: their game, their looks, the way they speak and the way they carry themselves are constantly policed here.

“Can you not play cricket with longer hair?”

Abdul Razzaq, a celebrated all-rounder at the height of his career, is the coach of the Khyber Pakhtunkhwa cricket team, which is the reigning champion of all three top-tier championships of Pakistan’s domestic cricket structure. Nida Dar is Pakistan’s leading wicket-taker in the Twenty20 Internationals (T20Is) format of cricket, and no other bowler in women’s or  men’s cricket has more wickets in the format for Pakistan. They both were guests in the lighthearted chat show G Sarkar, hosted by the legendary actor Nauman Ijaz, in an episode that aired on June 6 on Neo TV. The format of the show is that the moderator leads a discussion with two celebrity guests on the show, helped by a panel of comedians who make jokes about them.

During the show, Abdul Razzaq commented on Nida Dar’s appearance, implying that she looks more like a man than a woman. His comments included shocking phrases such as “shake her hands and you won't even feel she's a girl,” and “can you not play cricket with longer hair?”

The clip of the interview went viral on internet and it became a topic of discussion on social media, especially Twitter.

These remarks from a senior and internationally acclaimed former cricketer are not something new for women athletes in Pakistan. Former captain Shahid Afridi also made sexist remarks about women cricketers.

Meanwhile, Nida Dar took the comments in a dignified manner and said that women players have to undergo rigorous training sessions. “Our profession is such that we have to do batting, bowling and every other thing that cricket requires which needs fitness, so yes your body does become hard. If I hadn’t been a cricketer, I would have definitely been a sports professional of some sort,” she said.

Many on social media reacted to the interview while Razzaq was called out for his sexist comments.

Will men ever shut up and mind their own business. Mr Razzak, you are cheap.

You became a world class all rounder but your mentality stayed there from where you started your career. Pathetic of you to ridicule a Pakistani star on national TV. Sexism and sense of humour(‘_’) at their peak. https://t.co/urGwnCcmNI

Another user commented that this is what our women cricketers have to face constantly in this society, being told they will not get married:

Always knew Abdul Razzaq was sexist af. This is despicable. He kept on saying sexist stuff about Nida Dar being “manly” and “inki shaadi nai hoti” & everyone else kept laughing.
This is what our women cricketers have to face constantly in this society. https://t.co/7XRaRC9MMH

TV anchor Maria Memon did a whole segment on this topic in her show, and shared her two cents:

Razzaq , an accomplished sportsmen himself, is well aware of the hard work, dedication & commitment that goes in the making of a sportsperson.

My 2 cents on why Nida Dar is sooo cool & what’s so problematic about ridiculing women for their unconventional choices. @CoolNidadar pic.twitter.com/Z1OjnYaGxp

The guardian of cricket and the cricketers in Pakistan, the PCB, refrained from making any comment on this incident. However, Pakistan tennis star Aisam-ul-Haq Qureshi extended his support for Nida saying, “This kind of behaviour is totally unacceptable.”

“In my mind, I am having a breakdown on live TV,” wrote another user:

In my mind I am having a breakdown on live TV, I am screaming at Abdul Razzak and all three of them for cornering Nida like that with their sexist and misogynist BS. https://t.co/UEXiKZdzcK

Two days after the clip went viral, Abdul Razzaq shared his version and said that comments were made “in a light-hearted way.”

½ A clip from a TV show has surfaced, highlighting some comments I made towards my fellow cricketer Nida Dar. Although these comments were made in a lighted-hearted way and not to offend anyone, on reflection the choice of words and their presentation was poor and wrong.

He further said that he already communicated his position to Nida Dar:

I have subsequently called Nida Dar and clarified my position. I have utmost respect for all women, especially our women cricketers, who have made great strides in our sport. Nida is our shining star and I hope she continues to make Pakistan proud

While social media called Abdul Razzaq out and demanded that national heroes do better in their interviews and public statements, there was resounding support for Nida Dar for staying composed and calm during the exchange.