Black is a politically sensitive color in Hong Kong 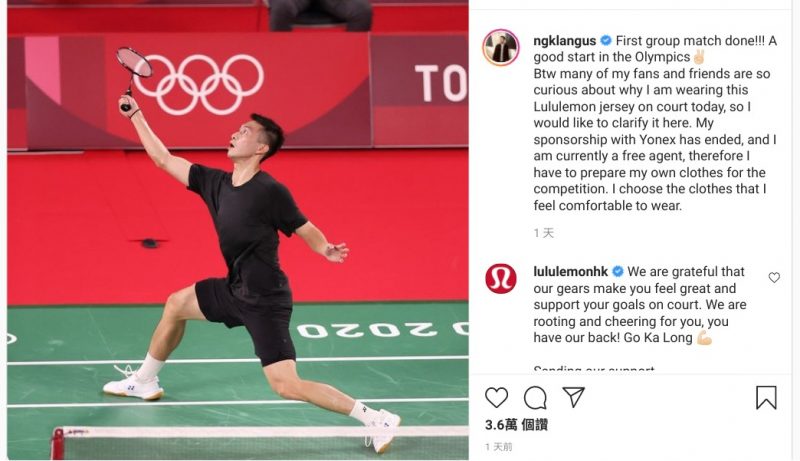 In Hong Kong, the hottest topic about the Tokoyo 2020 Olympic Games in recent days hasn't been the intense competitions or tight victories, but rather, about badminton player Angus Ng Ka-Long’s monochrome black outfit.

Photos of Hong Kong's number one badminton player, Angus Ng, flooded social media platforms soon after he defeated Mexican player Lino Munoz in the opening group game on July 24, 2021. Many praised his performance and some fawned over his monochrome outfit.

The online compliments about Ng’s black outfit unexpectedly caught the attention of pro-Beijing netizens and politicians, who consider black a politically incorrect colour as the majority of protesters wore black t-shirts during the 2019 anti-China extradition protests.

The strongest criticism came from Nicholas Muk, a member of the pro-Beijing party, the Democratic Alliance for the Betterment and Progress of Hong Kong (DAB), who wrote on his now-suspended Facebook page:

Other badminton players in the mixed doubles were wearing proper uniforms with Hong Kong’s flag. If you don’t want to represent Hong Kong China, please choose to withdraw from the competition.

The badminton team doesn’t even have the money to print Hong Kong’s flag and emblem on its jersey? Where’s the decorum? An all black outfit with white letters. No money for a proper design? The Home Affairs Bureau has to take care of this!

In response to the outrage, Angus Ng wrote first in English (see the title image) and then in Chinese on his Instagram to explain his outfit:

I know that many people are curious about my jersey because it was a different brand. I explained in my previous post that I currently do not have a sportswear sponsor and I have to prepare my own shirts and pay for the printing cost. However, I am not authorized to print the Hong Kong flag on them. I cannot do so without authorization.

I have always been proud to represent Hong Kong in competitions. Deep down in my heart, I also like this bauhinia flower [on Hong Kong's flag] very much.

Concerning the issue about ‘flag’, I am handling the matter in Tokyo and hope I can fix it in the next round of games.

Lastly, I hope that everyone can focus on the players’ performance rather than my shirt.

Ng did not renew his contract with his previous apparel sponsor, Yonex, before the Olympics. His current outfit was prepared in alignment with the International Olympic Committee's apparel requirements, which requires players to display their name and the region and they represent i.e. ‘Hong Kong, China’. He could not print Hong Kong’s logo on it because of Hong Kong's Regional Flag and Regional Emblem Ordinance, which requires government authorization to print the flag and emblem.

Despite the clarification, many from the pro-Beijing camp relay their anger on social media. One Pro-Beijing social media outlet, Speak Out Hong Kong invited its followers to comment on Ng's explanation in a post that attracted hundreds of hateful responses, such as:

Rubbish, he dares to act but not to admit. I despise you for not admitting to be an insect, you don’t represent Hong Kong. [Note: Beijing supporters called pro-democracy protesters cockroaches to justify brutal crackdown during the anti-extradition protests.]

The majority of 90 percent young people are yellow. You can only choose either to support or not. Don’t entangle in the fight of words, I choose not to support Hong Kong players, they are mostly rubbish.

Ronnie Tong, a member of the Executive Council also advised Ng to avoid black outfits in the future, though he did so in a lighthearted manner:

We are afraid of the dark after encountering ghosts (meaning after the anti-China extradition protests), so you’d better avoid wearing black, otherwise some may have a heart attack while watching the television.

Tong is a founding member of the pro-democracy Civic Party. However, he quit the party after the massive ‘Occupy Central’ pro-democracy protests in 2014 and joined Carrie Lam's Chief Executive election campaign in 2017. Since then, he has acted as Lam's political advisor. Hundreds have left comments under his post criticizing him for supporting the political colour censorship:

Why don't you spare a sentence to criticize Nicholas Muk but keep blaming the victim. Your camp brought up such unreasonable political accusation. Damage is done. Do you know how this can affect the players. I don't expect you  to be as supportive as the Singapore politician Tan Chuan-Jin, but at least be responsible. If Muk and you don't apologize over such as small issue, don't expect people to support such a government.

Why do you still wear a black suit in your profile picture?

Why don't you ask Hong Kong Tourism Board to urge tourists not to wear black outfits? There are so many nuts in Hong Kong.

The Hong Kong Badminton Association issued a statement on July 26 saying they have arranged another jersey for Ng.

Nicholas Muk suspended his Facebook page on July 26 after thousands of netizens left angry comments demanding him to apologize to the athlete.