'You should have a positive view on China' 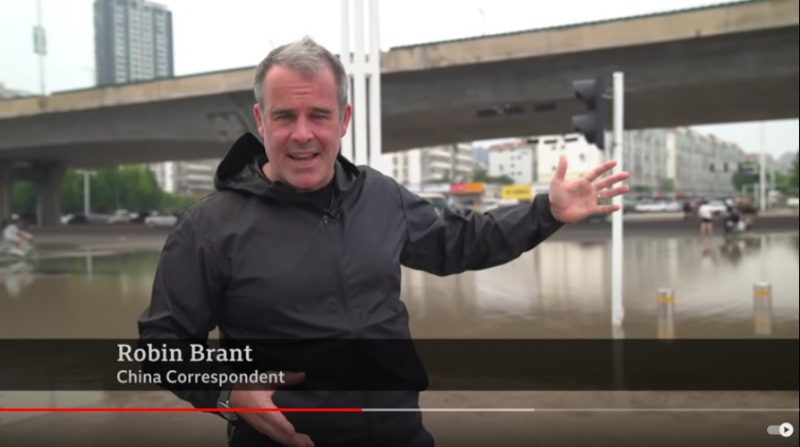 The following report was originally written by Roda Kwan and published in the Hong Kong Free Press on July 26, 2021. It is republished on Global Voices under a content partnership agreement.

Correspondents for several international media outlets were harassed by citizens on the streets of Zhengzhou over the weekend as they covered the aftermath of severe flooding in the Chinese city on July 22.

The social media platform Weibo was flooded with a stream of angry posts criticising the BBC’s China Correspondent Robin Brant for a report that questioned the effectiveness of the city's multi-billions flood control construction project after a dozen people died in a subway train carriage during the the flooding.

‘We don’t know why they were left so vulnerable’, Brant said in a report last Friday, adding that Beijing had warned other local governments to examine their own preparedness and metro regulations.

Video footage circulated online during the flooding show passengers inundated up to their chests in crowded train cars.

Chinese netizens on the country’s Twitter-like Weibo platform have accused Brant of being a ‘rumour-mongering foreigner’ and ‘seriously distorting the facts’ in his reports on the flooding.

The town visited last night north of Zhengzhou is now facing rising water levels. Rescuers were moving people last night. Reports now that the nearby river will be diverted so more need to leave today. pic.twitter.com/byTUPqlQE2

‘BBC reporter Robin Brant has appeared in disaster-stricken areas of our city many times, and has seriously distorted the facts. If you find this person, please call the police immediately’, one post on Saturday read.

The next day, Beijing Bureau Chief for the LA Times Alice Su and Deutsche Welle’s China correspondent Mathias Boelinger were surrounded by an angry crowd who mistakenly believed Boelinger was Brant.

‘They kept pushing me yelling that I was a bad guy and that I should stop smearing China. One guy [tried] to snatch my phone’, Boelinger tweeted following the incident.

‘You should have a positive view on China’, one man told Boelinger, a video circulating on Weibo showed.

The pair were interviewing shopkeepers in the city on the challenges they faced amid the flooding and the ‘insufficient’ help from the government to drain their premises underground, Su tweeted.

Correspondents for Al Jazeera and the Associated Press also tweeted about being harassed by crowds, who took videos of them and called the authorities.

Al Jazeera’s Katrina Yu tweeted that the incidents were a ‘sad sign of increasing anger and suspicion towards foreign media in China’.

Sad sign of increasing anger and suspicion towards foreign media in #China. When we filmed in front of the #Zhengzhou subway crowds were recording us and calling the authorities. This post on Weibo warns residents “don’t accept interviews from foreign media, don’t be used!” pic.twitter.com/3gI1eUjsIn

China has expelled at least 20 correspondents in the past two years, the largest number since 1989, according to the Foreign Correspondents’ Club of China.

The incidents came as state-owned Global Times rebuked foreign media reports that the floods had shattered the ‘myth’ of Zhengzhou as a ‘sponge city’ after the government invested 50 billion RMB (7.72 billion US dollars) in 2018 in infrastructure to protect the city from severe flooding.

The articles also questioned authorities’ emergency response to the flooding.

‘Chinese observers refuted the reports, noting that these media reiterated the loss, but neglected one fact, that the floods in Zhengzhou is a once-in-a-century occasion and beyond any city’s bearing capacity’, the Global Times article read. ‘They noted that the Zhengzhou government has made its best efforts to limit the loss.’

Zhengzhou in Henan province saw an entire year’s worth of rain within three days last week, causing floods that have killed at least 56 people, according to official figures.