A court ruling ended the impasse on Samoa's political leadership 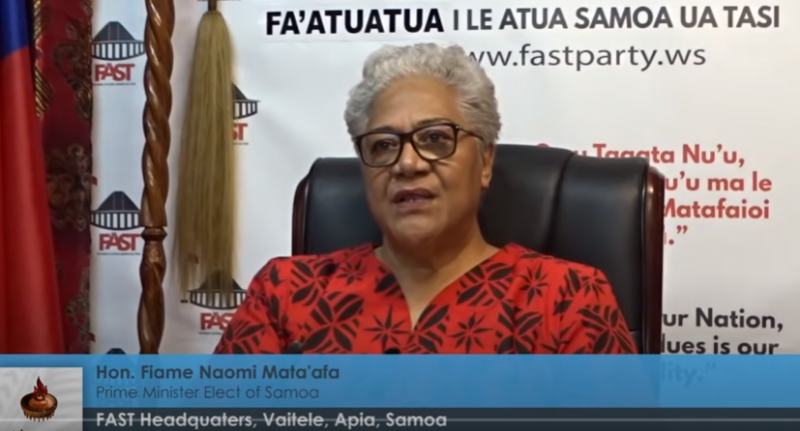 Fiame Naomi Mata’afa will be Samoa's first female prime minister after the country's Court of Appeal released a ruling on July 23 acknowledging her victory in the April 9 election. The election was followed by months of controversy after two candidates claimed victory.

The ruling Human Rights Protection Party (HRPP) won 25 parliament seats while the opposition Fa’atuatua I le Atua Samoa ua Tasi (FAST) Party, led by Fiame, won 26 seats. HRPP came to power in 1982 and its leader, Tuilaepa Dr Sa’ilele Malielegaoi, has been prime minister for the past 22 years. The loss signaled the loss of public support for the incumbent prime minister who was confident about another landslide election victory.

Tuilaepa and HRPP refused to recognize FAST's victory and brought the matter to Samoa's constitutional court. Fiame and other elected members of FAST were forced to hold their swearing-in ceremony on May 24 on the lawn outside the parliament building after the building was locked by HRPP allies.

Tuilaepa has dismissed the swearing-in as illegal and assumed the role of caretaker prime minister while the court debated the issue. The court finally made its decision on July 23 which ended the impasse in the country’s leadership.

Fiame held a meeting with her Cabinet members the following day. In a public address, she vowed to prioritize the passage of the government’s budget:

My administration is committed to returning this country to the special place dreamt of by our forefathers when they grabbed the mantle of independence almost 60 years ago.

Today, I and Cabinet met with key officials to begin transition of our new government into office.

At the earliest opportunity next week, Parliament will convene to carry out its first order of business to pass a budget to ensure the ongoing operations of Government.

For his part, Tuilaepa described the court order as “unconstitutional and disrespectful” but he has started vacating his office.

Samoa Observer newspaper published an editorial urging the new government to move forward instead of being bogged down by vindictive politics:

…our focus on a nation should be on moving forward and making progress not giving into the base and tribal instincts of politics.

The best answer to her critics will be for Fiame to govern well.

And if her administration is able to identify past instances of money lost through improper or negligent practices then imposing new standards will significantly boost her progress.

The court’s surprise retrospective installation of a new Government is a fittingly unexpected end to the highly convoluted story of Samoa’s April election of 2021.

Having Samoans unite and come together in spite of everything that has brought us to this point would be the ultimate conclusion.

The Samoa Observer also interviewed several residents about the court decision. Theresa Grace Finau was among those who witnessed the swearing-in ceremony in May:

I was there under the tent where the swearing in ceremony was held by FAST party. It was nothing unlawful and even if it was under a tree or whatever if it's time to convene parliament then let it push through. I would like to congratulate our first female Prime Minister Fiame Naomi Mataafa. All the best with the new Government of Samoa.

The court ruling was welcomed by many countries and institutions across the Pacific. One of the Pacific leaders who greeted the victory of Fiame was New Zealand Prime Minister Jacinda Ardern:

It was such a pleasure to speak this morning with Samoa’s Prime Minister-Fiame Naomi Mata’afa, and congratulate her on behalf of New Zealand on her election victory. This is such a historic moment for Samoa’s democracy.