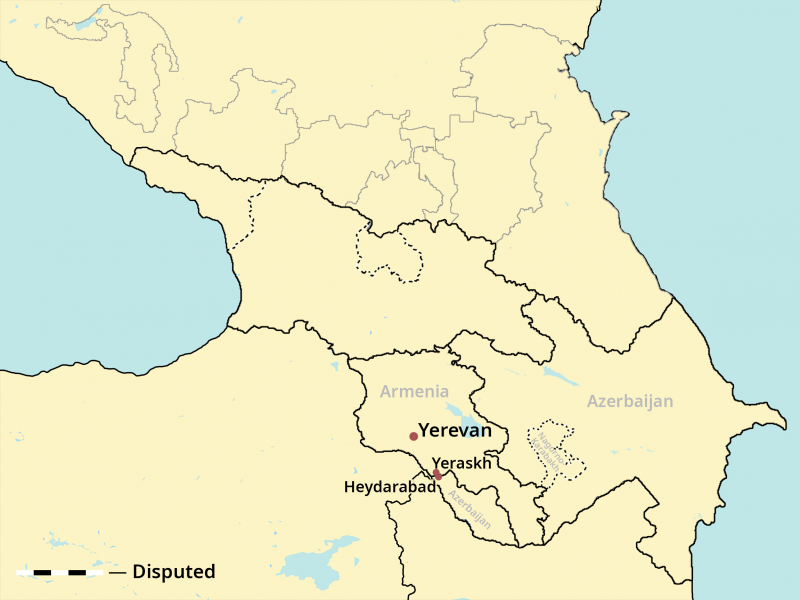 A number of clashes took place in the vicinity of the Armenian village of Yeraskh and the Azerbaijani village of Heydarabad, reportedly beginning late Monday, July 19, and lasting into the early hours of Tuesday, July 20. Two people were reportedly injured, one from each side of the conflict.

The clashes are a symptom of increasing tensions within the region as Azerbaijan looks to maximize pressure on Armenia and Russia. In a thread on Twitter analyzing the renewed tensions, Laurence Broers, South Caucasus Program Director at Conciliation Resources, noted that Azerbaijan is pressuring its neighbor Armenia for an additional peace agreement and also pressuring Russia to ‘deliver’ on agreements reached during the November 2020 peace agreement, following the 44-day war between the two countries.

Azerbaijan is consequently seeking to maximise pressure on Armenia to force it into a comprehensive peace agreement, for which – from Baku’s perspective – there will never be a better time than now.

Tensions also put pressure on Russia to ‘deliver’ on agreements reached so far, especially on what Azerbaijan refers to as the “Zangezur corridor”, a right of safe transit across Armenia’s southernmost Syunik region conceded by Nikol Pashinyan in the 9/11/2020 CF declaration.

Pashinyan is Armenia's Prime Minister who agreed to allow Azerbaijan transit across southern Armenia as part of the November 2020 peace agreement.

While the situation along the Armenian border with Nakhchivan has been tense in recent days, small clashes have occurred along much of the Armenia-Azerbaijan border since early May. Earlier in July, an Armenian soldier was wounded in a shooting near the Verin Shorzha village of Gegharkunik Province.

Following the latest incident, the Armenian Defence Ministry accused Azerbaijan of opening fire on Yeraskh using mortars. The village head, Radik Oghikyan, was injured, according to the ministry, while trying to extinguish a fire.

The ministry stated that it would not allow any change in the border, adding that the responsibility for any further escalation “falls on the military-political leadership of Azerbaijan.”

Similar statements were made by officials in Azerbaijan. According to the Azerbaijani Defence Ministry, Armenian forces fired in the direction of Heydarabad “using weapons of various calibres.”

Tensions along the northern border of Nakhchivan rose on July 14, after an Armenian soldier was killed as shots were exchanged over the border.

On the same day, Armenia reported that two of its soldiers had gone missing due to fog near Lake Sev, on the border between Armenia’s southern Syunik Province and Azerbaijan. No official information has since been released on their whereabouts, meanwhile, Sputnik has reported that, according to its sources, the two soldiers are currently in the custody of Azerbaijani authorities.

The area around the lake has been a hotspot since early May,  after an apparent incursion of Azerbaijani troops in the area as well as further north in Gegharkunik Province. No change in the situation has been reported since then.

Armenian Prime Minister Nikol Pashinyan has called for both sides to withdraw troops from the border. Azerbaijani President Ilham Aliyev has not accepted the proposal.

BREAKING: Heavy fighting between Armenian and Azerbaijani forces reported on the border near the Nakhchivan enclave

Armenia and Azerbaijan fought a six-week war in 2020 over Nagorno-Karabakh, recognized internationally as part of Azerbaijan but controlled by ethnic Armenians since the early 1990s. The two sides signed a cease-fire on November 10, 2020, with Azerbaijan regaining control over a section of Nagorno-Karabakhall and all seven districts surrounding Nagorno-Karabakh previously under occupation. The agreement, signed between Russia, Armenia, and Azerbaijan, also called for the deployment of some 2,000 Russian peacekeepers.

Following the most recent clash, Armenia's Minister of Defense Vagharshak Harutyunyan, who was appointed to this position after the war, resigned.

BREAKING: Armenia's Minister of Defence Vagharshak Harutyunyan has resigned. He was appointed after the Second Nagorno-Karabakh war.

Meanwhile, the EU Special Representative for the South Caucasus and the crisis in Georgia, Toivo Klaar, expressed concern over renewed tensions between Armenia and Azerbaijan in a tweet:

Deeply worrying developments continue on ??-??state border. Reiterate our call for restraint and separation of forces & constructive engagement on border issues before new casualties are registered. ??stands ready to assist the sides.

Similarly, the US Embassy in Armenia called for de-escalation:

The U.S. Embassy is concerned by incidents along the border between #Armenia & #Azerbaijan, most recently near #Yeraskh ​#Sadarak. We call on both sides to swiftly and peacefully de-escalate tensions and urge a return as soon as possible to substantive negotiations.