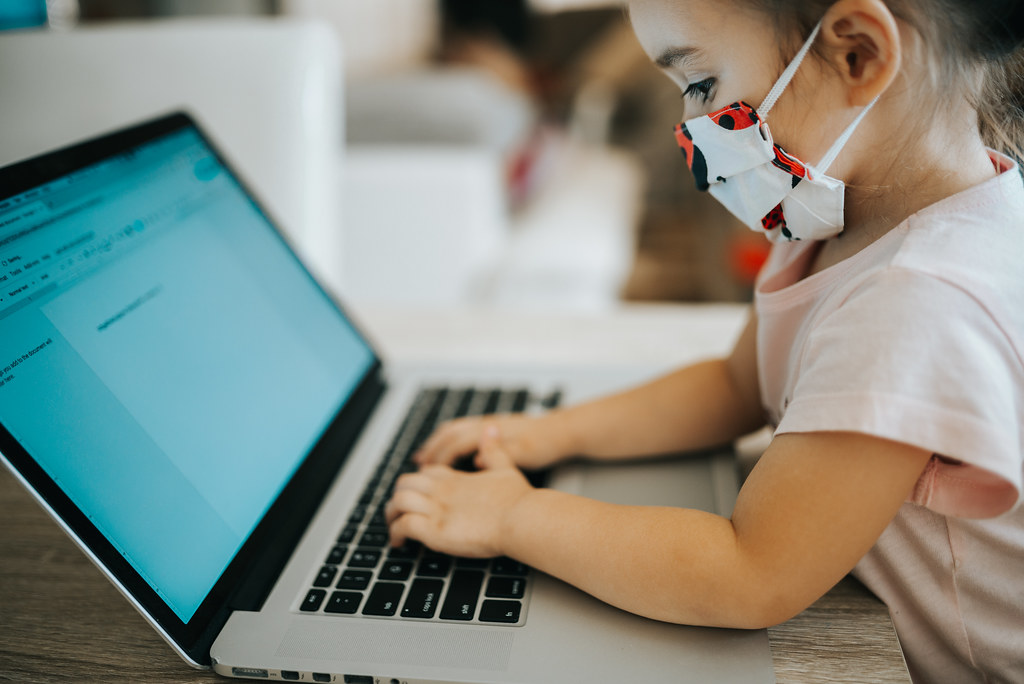 “Online teaching. Little girl working on the laptop.” by shixart1985 is licensed under CC BY 2.0

Students of all schools in Kyrgyzstan have been studying from home since the beginning of April 2020. However, they and their parents face hardship with distance education, as many schoolchildren across the country have limited access to the internet, do not have the appropriate devices, or do not know how to use the necessary mobile applications.

Teachers were also not ready to transition to digital education when the authorities suddenly decided to transfer all learning online without conducting the adequate tools and training to avoid disruptions.

Most teachers received a one-week training course to familiarize themselves with the new software and methods. Upon completion of the course, they had to start working immediately with their now virtual class.

Education and the Pandemic

Globally, the COVID-19 pandemic has caused massive disruptions to the educational process and has already had an almost universal impact on students and teachers worldwide.

According to a UN report, the closure of schools and other educational institutions affected as much as 94 percent of the global student population, which went as high as 99 percent in low-income and lower-middle-income countries.

The World Bank predicts that the coronavirus pandemic will deliver a “devastating blow” to the education system, the consequences of which will be “felt for decades to come.”

The first stage of vaccination against the virus started in March 2021, targeting specific categories of workers, especially in the medical and emergency sectors. The minister of health and social development and his deputies were the first to be vaccinated, in an effort to reassure the population that the vaccine was harmless and necessary. Kyrgyzstan received a first batch of vaccines from China, and the government will have to negotiate further supplies to increase vaccination numbers in the coming months.

Meanwhile, in March and April 2021, the virus continued to spread, at a higher rate. Deaths were reported almost daily. Yet, rules for wearing masks, maintaining distance, and banning mass events were not observed.

The worsening epidemiological situation in the country will further delay the opening of schools, given that children could be highly effective vectors for the virus.

Sholpanbai uulu Melis, research assistant of infectious diseases at the Akhunbayev State Medical University, however, advised caution. In an interview with Global Voices he said that, at the beginning of the pandemic, “the transition to online education had an impact on reducing the risk of transmission,” because children could have spread the virus among themselves and on to their families.

Statistically, children fall ill at lower rates than adults, in Kyrgyzstan and across the world. It is more likely that children carry the infection in an asymptomatic form and the percentage of children with such complications is low.

A paper published by researchers of the Data School, part of a global network of organizations that work to improve data literacy, and City Initiatives, a foundation that explores changes in the urban environment and communities, surveyed 338 teachers and 1,324 students in Kyrgyzstan, finding that:

Dogdurgul Kendirbayeva, adviser to the minister of education and science of the Kyrgyz Republic, highlighted the digital divide between urban and rural populations in an interview for the “Voices of Kyrgyzstan in the time of COVID-19” project at the University of Central Asia:

Teachers [across the world and in Kyrgyzstan] said that they urgently had to switch to the use of digital educational technologies. Especially in remote places, there was no access to high-quality internet connection, as well as electronic devices, laptops, and phones.

In March 2020, the Government of Kyrgyzstan proposed various formats of distance learning. The lessons were broadcast on state TV channels. Around 1,700 video tutorials were filmed for the end of the 2020 school year. For the 2020-2021 academic year, the ministry of education and science prepared 7,022 video tutorials.

However, students and their parents were — and still are — faced with the fact that the distance education program from the department is not suitable for everyone: many schoolchildren in Kyrgyzstan have limited access to the internet, do not have mobile devices or a TV, or do not know how to use the necessary mobile applications.

Last year, a study by Lawyers for Human Rights, an NGO focusing on issues of equality and justice, demonstrated that the ministry of education did not monitor or analyze the quality of distance education services provided. Also, the study found that the state failed to provide the necessary devices for online education to those who could not afford them.

The government's approach to education during the pandemic has been patchy. Students of the second, third, and fourth grades returned to traditional, in-person education on March 9, 2021. A few weeks later, though, the Bishkek mayor's office decided to make the educational process in schools and kindergartens remote from April 12 until the epidemic situation improved. Gradually, during April and May, schools in Kyrgyzstan’s major cities were being quarantined. Universities continued lectures and exams in a mixed format, online and offline.

Due to the precarious status of health in the country during the pandemic, it is unclear whether education will continue fully offline in the next academic year, starting in September. So far, however, the government has been unable to adapt the educational processes to the new reality.