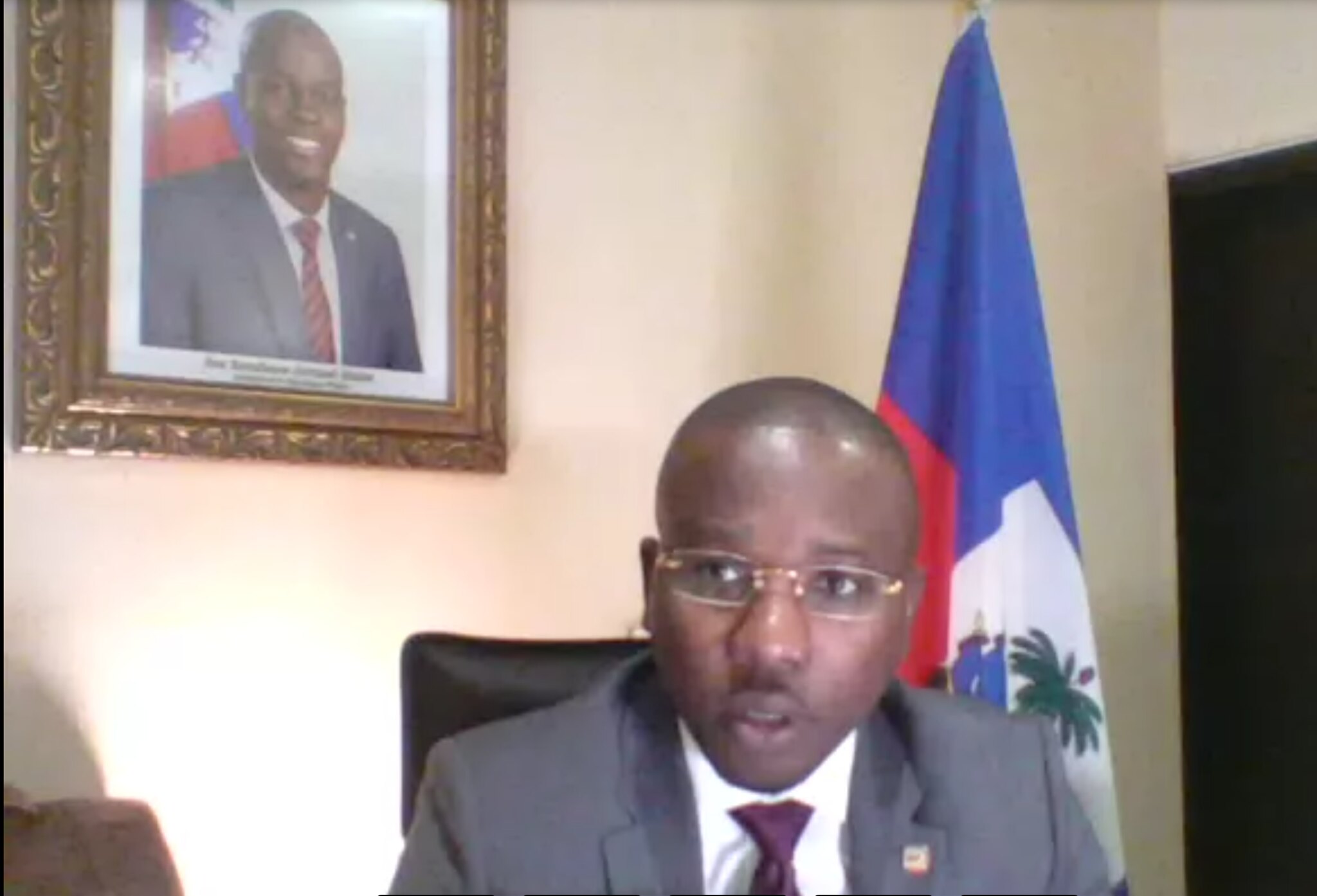 Claude Joseph, who was then Minister of Foreign Affairs and Worship of Haiti, at a May 20, 2020 Virtual Special Meeting of the Permanent Council. A portrait of former president Jovenel Moïse hangs in the background. Joseph has stepped down as interim prime minister, allowing Ariel Henry to be sworn in. Photo [1] by OEA – OAS on Flickr, CC BY-NC-ND 2.0 [2].

Ever since the July 7 assassination [3] of Haitian president Jovenel Moïse, his former ad interim prime minister, Claude Joseph, had been the de facto leader of the country. It was Joseph who first confirmed [4] that Moïse was dead, stepping into an ad hoc leadership position at a time when it was unclear [3] who was in charge. Two days before his murder, however, Moïse had nominated [5] Ariel Henry as his seventh prime minister. Henry had not yet been sworn in when Moïse was killed, but in an announcement [6] on July 20, was introduced as the country's new prime minister after Joseph confirmed [7] he would step down.

The move follows a July 17 push [8] by certain international diplomats—the self-appointed Core Group—for Henry, as the “designated” prime minister, to form a “consensual and inclusive government.” The group comprises representatives from Brazil and Canada, France, Germany, Spain and other members of the European Union, the United States, the Organisation of American States [9] (OAS) and the United Nations [10] (UN). It was a call that did not go down well with the Caribbean Community (CARICOM [11]), of which Haiti is a part.

The following day, on July 18, prime minister of Trinidad and Tobago, Keith Rowley, said [12] on his Facebook page:

This is not just about a snub for Joseph. The real snub and outright INSULT is the absence of even a mention (far less recognition in any form) of CARICOM. Haiti is a full MEMBER of CARICOM, its largest member, and this lack of recognition and involvement combined is an insult to all of us, coming from those who designate themselves the ‘Core Group’.

By our own actions of kowtowing and genuflecting to those who see us as unworthy and irrelevant, we have continuously contributed to our own demise.

We are either a respectable CARICOM or we are fawning vassals deserving of such disrespect.

I maintain, to my colleagues and brothers and sisters, that we might be small but ought never to accept being insignificant and inconsequential.

Other Caribbean leaders, most notably Antigua and Barbuda's Gaston Browne, who is the current chair [13] of CARICOM, felt [14] that CARICOM should “take the lead with the support of the international community to help the Haitian people to come up with an indigenous solution.”

CARICOM's position was echoed in newspaper editorials [15] and on social media platforms. Both the Trinidad Express [16] newspaper and regional diplomat Sir Ronald Sanders [17] suggested that CARICOM is one of the few external organisations that elicit trust and confidence in the Haitian people, while writer and university lecturer Amilcar Sanatan noted [18] on Facebook:

CARICOM has been monitoring the situation and we will see the extent to which the regional bloc can help, if that help is wanted at this time. What we don't want is further instability and more political violence.

It is believed that prior to Moïse's assassination, CARICOM, being concerned about the ongoing social unrest and political instability in Haiti, had hoped to mediate [19], but according to regional journalist Wesley Gibbings, although the dynamics [20] between the two have been awkward, “[CARICOM]’s credibility when attending to the problem of a family member cannot be ignored in the crafting of a resolution, however temporal.” He continued [21]:

[…] while the prime minister is quite right about the ‘Core Group’s’ disrespect it is not entirely accurate to give the impression of Haiti’s wholesome engagement of the Caricom agenda. That country has absolutely not been a reliable ally on the troublesome question of Venezuela, among other foreign policy dilemmas [and] Haiti is also a ‘de jure’ but not ‘de facto’ participant in the CSME [CARICOM Single Market and Economy [22]], and its nationals continue to require visas to enter a majority of Caricom countries […]

In the wake of Moïse's death, the situation is even more complex. Quite apart from the fact that the Haitian diaspora is having a hard time [23] separating fact from fiction when it comes to the assassination itself, the fact remains that Moïse's presidency was tumultuous—plagued by corruption allegations [24], social unrest [25], and calls [26] for his resignation. The country's political turmoil has led to Moïse ruling by decree for over a year before his death; Haiti has not yet held [27] legislative elections.

On Facebook, Jamaica-based writer Annie Paul quoted [28] an excerpt from an opinion piece [29] in The Haitian Times, in which Garry Pierre-Pierre linked Haiti's deeply ingrained caste system to its political, economic and social woes. Meanwhile, the Haitian opposition appears to regard Henry as a continuation of Moïse's fraught legacy, writing him off [30] as a puppet of the international community even as Henry himself has been pushing an agenda of unity [30].

Jovenel Moïse's state funeral will be held on July 23. His wife Martine, who was injured in the attack and was airlifted to Florida for medical care, has returned home [31] to attend the service. Investigations into his assassination are ongoing.