The ‘mural war’ continues in Almaty, as street artists mock the ex-president’s portrait 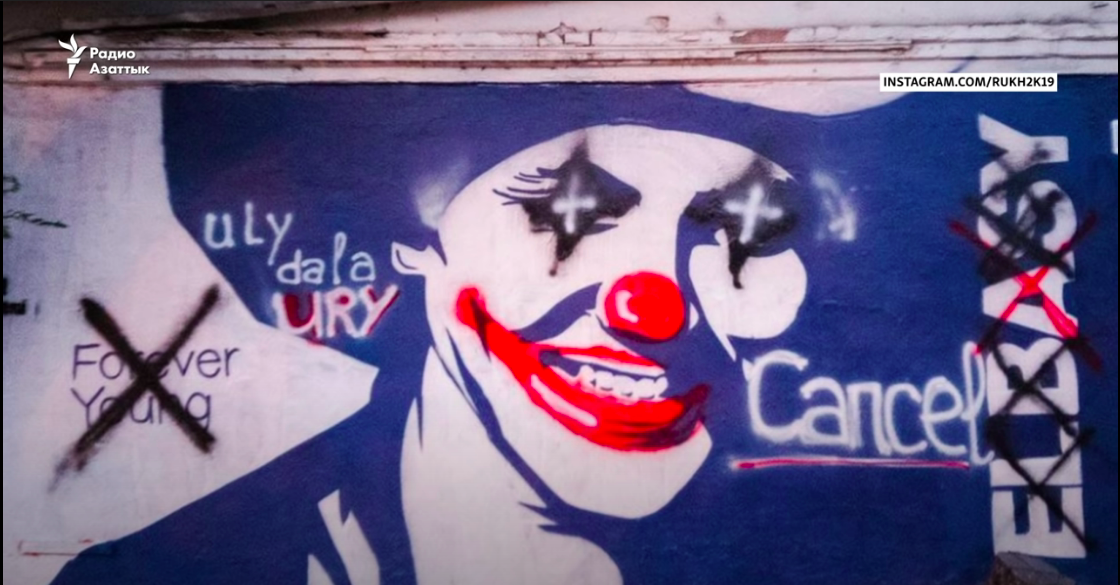 The latest iteration of the mural before it was removed. Screenshot from Radio Azattyk YouTube channel.

A stencil of old photos of the former president, rendered into a mural, raised questions among the authorities in Kazakhstan. When the writing on the wall became politically sensitive, however, they were swift in painting over it. The ‘mural war’ between street art activists and the government seems to be centered around the legacy of the most influential man of independent Kazakhstan, Nursultan Nazarbayev.

Nazarbayev left office in March 2019, in a carefully managed power transition that handed the presidency to Kassym-Jomart Tokayev, a former diplomat and loyal head of the Senate.

In the aftermath of both the resignation and the election that cemented Tokayev’s position, the people of Kazakhstan have taken to the streets, protesting the continuation of a regime that has long repressed dissenting views.

Street demonstrations, however, have gone hand in hand with flash mobs and artistic displays that have become viral across the social media networks in the country.

Because of its designation of ‘cultural and business capital,’ most of these actions have taken place in Almaty, the country’s largest city.

One particular street corner in Almaty, the intersection between Zharokov and Mynbayev street, was targeted by street artists who chose to depict Nazarbayev in stylized pictures, which were quickly modified to add satirical features to his iconic portraits.

Originally the utility hut had hosted a mural in honor of XXXTentacion, a US rapper who died at 20 in 2018. Dane One, a graffiti artist from Almaty, stylized the rapper’s portrait and added a line from his song: “What is real will prosper.”

The struggle for the mural

The wall had been whitened out and the mural had fallen out of the memory of Almatians when in 2021 it became the target of street artists and authorities alike.

On May 4, a portrait of Nazarbayev appeared, tagged with the ‘01’ nickname that Kazakhstanis use to refer to him, ‘Elbasy’ or ‘leader of the nation,’ the title that was given to him in a 2010 law, and ‘Forever Young,’ an ironic comment on his staying power.

On May 19, Nazarbayev’s forehead in the mural was sprayed on with the word ‘Cancel’, a common internet term for highlighting something or someone that one disagrees with and wants to stop seeing.

Courts are prone to sentence activists who insult Nazarbayev, who officially became ‘Leader of the Nation’ with a 2010 law that protects him from prosecution.

Faced with a public insult to Elbasy, the authorities proceeded to whiten out the mural.

Days later, the wall was once again in the news because street artists had written ‘I’ll be back…’ on it, again tagging ‘01.’

Weeks later, on July 8, two days after Nazarbayev’s birthday, the wall received yet another artistic makeover.

This time, a portrait of young Nazarbayev, inspired by a series of archival photos from the 1960s when he was working as operator in a blast furnace in central Kazakhstan, appeared.

The ‘01’ tag, the ‘Elbasy’ description, and the ‘Forever Young’ ironic comment accompanied the mural, hinting that the artist or collective behind the second mural had masterminded the first one as well.

Quickly, however, the second mural was subject to modifications: the ‘Forever Young’ writing was crossed over with spray paint, the ‘Elbasy’ description was preceded once again by the word ‘Cancel’, the face of Nazarbayev was re-painted in the guise of The Joker from DC Comics’ Batman.

A tweet by journalist Assem Zhapisheva summarized, graphically, the chronology of the Nazarbayev murals on the wall of the Almaty utility hut.

The mural was removed just hours after its latest modifications, in compliance with the zero tolerance policy that the authorities have administered to satire, irony, or insults towards Nazarbayev.

Instead, the government has continued to honor the former president. For his birthday this year, two bronze statues were unveiled, one in the capital Nur-Sultan and the other in the southern city of Turkistan.

The Qazaq Koktemi or ‘Kazakh Spring’ movement, which claimed to be behind the idea of the murals, seems determined to continue to demand that Nazarbayev be brought to justice.

Nursultan,
Everyone is equal before the law and you are responsible for all your actions.
No matter how many monuments are erected in your honor, the people will remember you only with disapproval.
The changes are already here and we say that you are not the son of the great steppe, but a great thief!
#qazaqkoktemi