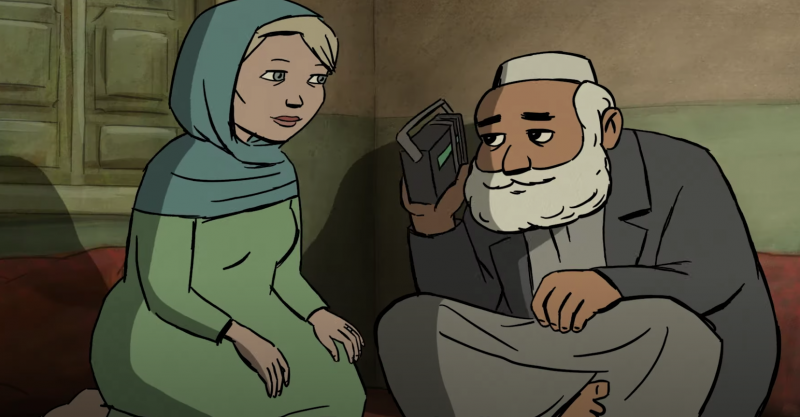 Screenshot from the YouTube trailer [1] of “My sunny Maad”

A Czech animation movie has won a major award for its depiction of an unusual story inspired by true facts between a Czech woman and an Afghan man. But can this movie change perceptions about Afghanistan that is mostly reduced in Czech politics to a source of terrorism and refugees, as the last Czech soldiers have just left Kabul?

On June 19, the long-form Czech animation movie “My Sunny Maad [1]” (in Czech, the animation is called “Moje slunce Mad”, which means literally “My sun Mad”) won the top Jury Award at the Annecy Animation Festival [2], one of the most prestigious festivals for animated films that takes place every year in France.

The animation, which mixes dialogues and narration in Czech and Dari, is an adaptation of the book “Frišta [3]” by one of the top Czech journalists, Petra Procházoková, [4] in which she describes the love story between a Russian female student and a male Afghan student who met in Moscow. Procházoková herself has covered Afghanistan extensively and is married to an Afghan man. Her novel “Frišta” is largely inspired by her own experience of living in Afghanistan and in Afghan culture.

The movie, co-produced by Michaela Pavlátová, [5]with Slovak and French partners, describes the life of a young Czech woman, called Helena, who falls in love with Afghan student Nazir in Prague, marries him and moves to Kabul. The animation is full of humorous scenes and paints cross-cultural situations in happy colors, as can be seen in its trailer:

But will the award – a first for a Czech movie – improve the views most Czechs have about Afghanistan? When the Soviet Union invaded Afghanistan in 1979, then-Socialist Czechoslovakia officially endorsed Moscow’s policy and hosted the first wave of Afghan students [6]. Afghanistan was then portrayed in media as a brotherly country on its way to Socialism.

A new chapter in Czech-Afghan relations was opened in 2002 when Czech soldiers joined NATO military operations. Since then, close to 12,000 Czech soldiers [7] have served in Afghanistan, yet as other missions, they left the country in late June 2021 after 19 years of presence. A few dozen Afghan families [8] will also move to the Czech Republic as their lives could be at risk if they stayed in Afghanistan, because some of their members worked for the Czech contingent of NATO forces.

During this period, Afghanistan became portrayed as a source of terrorism and religious extremism. This negative image was reinforced by statements of the current Czech President Miloš Zeman whose government has repeatedly refused to take in any refugees [9] from Muslim countries in breach of European Union [10] obligations. Zeman himself has multiplied anti-Muslim and anti-migrant statements over the years, saying [11] for example in 2016 that “Muslims don't want to work, they like to claim social benefits.”

I am concerned that they [refugees] would live off social benefits, and not work. This pushes back their own county into poverty. In truth, migrants harm their own country.

Ironically, Zeman accepted over 4,000 Muslim refugees [13] from Kosovo in 1999 when he was serving as Prime Minister.

A 2019 poll [14]indicates that the first source of threat Czech identify is “Islam and refugees”. As the country is gearing up for legislative elections [15] to take place on October 8 and 9, the anti-Muslim rhetoric is being used by several parties to lure conservative votes.

Given that cinemas remain largely empty due to the COVID-19 pandemic, and show very few movies, it seems there will be little chance for Czech viewers to catch a viewing of “My sunny Maad” and, for some of them, to alter their opinions about Afghan culture.