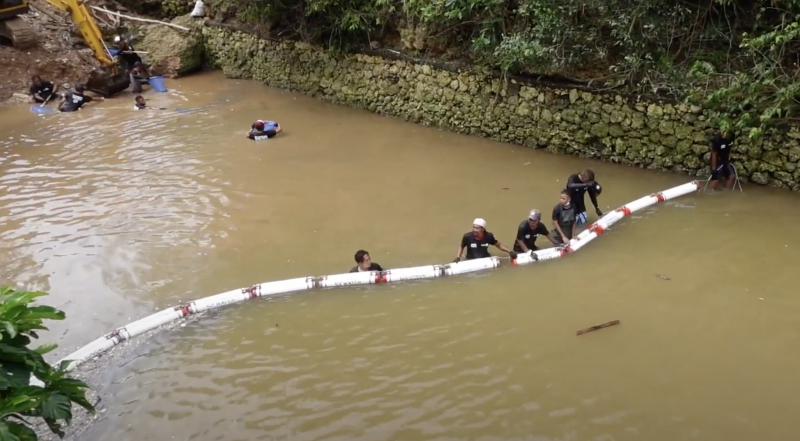 Numerous grassroots movements, NGOs, and volunteers are using Indonesia’s pandemic border closure to battle Bali’s long-standing plastic pollution problem, cleaning up rivers and forests that have been littered with tourism-related plastic and trash.

While Bali’s trash problems are fairly [2] well [3] documented [4], the root of the problem is decades of unsustainable tourism paired with an underdeveloped waste management infrastructure and an increase in global marine pollution.

Tourism is a massive economic driver in the archipelago and has grown at a breakneck pace in recent years. Between 2010 and 2019, Bali’s tourism more than doubled from 2.57 million [5] to 6.3 million [6] visitors. However, as the tourism and hospitality markets have skyrocketed, the island’s infrastructure has stalled — particularly its waste management, transportation, and water treatment facilities — leaving it unequipped to deal with the massive influx of visitors.

Gus Angung head of Bali’s tourism board elaborated on the issue in an interview with ABC News In Depth [7].

The infrastructure is the problem here in Bali. Traffic and rubbish. The number one problem in Bali. Bali has already had tourism [for] more than 100 years. All of the money comes in, but 70 percent of the money goes out of Bali because the business is not operated by [the] Balinese people. The way of thinking has to change.

On average in Bali, per capita, a tourist uses 3.5 times [8] more plastic per day than a local resident.

Because Bali — like much of Indonesia — has no centralized waste management system, most trash ends up in the island’s rivers, which eventually carry it to the ocean. However, during the country’s rainy season, storms at sea wash trash back onto Indonesian shores, blighting its beaches and creating a never-ending cycle of pollution.

Bali experienced a particularly troubling rainy season this year as its beaches were inundated with trash. During a January 4, 2021 beach cleanup, one citizen staged a protest by dressing up as a mermaid and posing in the fields of trash that littered the beach.

Mermaid in a sea of…trash?

LOOK: A person dressed as a mermaid lies on Kuta Beach covered in trash in Bali, Indonesia on Monday, January 4. ?: Dwi Duarsa via Reuters pic.twitter.com/v13S8wqMDk [9]

During a single beach cleanup, it’s not uncommon for 30–60 tons of garbage to be bagged. Denise Hardesty, a research scientist at Australia’s CSIRO science agency who specializes in global plastic pollution, told the Guardian [11] that there is a “tremendous amount” of plastic being washed ashore, and she expects the situation will only get worse.

It’s not new and it’s not surprising and it happens every year, and it’s been growing over the last decade. The rubbish had likely not traveled far and there would be many other beaches on the Indonesian archipelago suffering a similar fate.

Indonesia produces about 6.8 million tons [12] of plastic each year, with about 90 percent of it ending up as streetside litter, in landfills, or in the ocean — and that’s not even considering the tons of trash that are imported [13] from Australia and Western countries each year.

The Balinese government hopes to curb that number and reduce its plastic production by 70 percent by 2025. To do so, they have undertaken a number of initiatives [14] aimed at reducing their trash problem, though few have been successful.

For instance, in December 2018 Bali Governor announced [15] that the province would implement a ban on single-use plastic bags, which was widely ignored [16].

The Coronavirus pandemic has further exacerbated the island’s plastic problem as people rely on disposable PPE gear and single-use plastic for takeaway at restaurants. Some researchers estimate [17] that globally, the pandemic has resulted in an additional 1.6 million tons of plastic pollution a day.

Though the government is struggling to combat the island’s trash problem, individuals and communities are stepping up in big ways to try to stem the tide of plastic pollution.

Like most countries, Indonesia’s borders became effectively closed to international tourists in March 2020.  For Bali — where an estimated 70–80 percent [18] of the economy is based on tourism — this was a devastating blow.

But even before the pandemic, some said [19] that Bali’s natural resources, reputation, and tourism sector were threatened by the immense amount of plastic pollution.

Some community members are using this break in tourism to try to “reset Bali,” organizing grassroots environmental movements focused on cleaning the island’s beaches, rivers, and forests. One community organizer, Indonesia-raised Gary Bencheghib, discussed his efforts in an interview with ABC News In Depth [7].

There was a sense of, we want to go somewhere, we want to do something. And so that's really where we started our weekly clean-ups around the same time. Progressively, you know, we went from, like, 20, 30 an hour, all the way up to 150, 200 people. Because of COVID, people have more time. There is this community out there that wants to clean and press the reset button on Bali before we open up to international tourism.

There are hundreds of anti-plastic organizations in Bali, most of them small local initiatives started by students or residents hoping to make a difference. Many of these groups, including the organization Bye Bye Plastic Bags which was started by two teenage girls in 2013, hold daily beach cleanups [3] to try and keep up with the onslaught of plastic and raise awareness about the problem.

Bencheghib’s community group, Sungai Watch [34], has been working since the start of the pandemic to clean up Bali’s biodiverse mangrove forests and rivers. The group has deployed a buoy technology in many of the island’s rivers to limit trash flow and has collected 450,000 kg of trash since September 2020.

Though the group recognizes that without some major structural change, cleaning the rivers alone won’t fix Bali’s problem. That is why the group has also been tagging and categorizing every single piece of trash it collects. The group hopes to hold consumers and companies accountable by gathering data on the island’s trash output.

What we’re trying to leverage is the brands that are responsible for the plastic packaging. Sungai watch in many ways is more of a data river cleanup organization. So really giving that transparency as to what we’re finding in the rivers online for everybody to see, so they can engage.

The group posted a video of their buoy technology on Twitter.

Hardesty’s CSRIO has proposed another solution to Bali’s trash problem: artificial intelligence. [37] The group is developing technology that will use AI to monitor rivers’ trash output, which they are currently testing in London and Dhaka.

In the meantime, as Indonesia continues to address its COVID-19 surge [38], it’s clear that Bali, and the nation as a whole, needs to reassess its tourism reliance and find a balance between welcoming in tourists and economic opportunities and preserving the prized natural resources it is known for.