At least 36 journalists are still in detention. 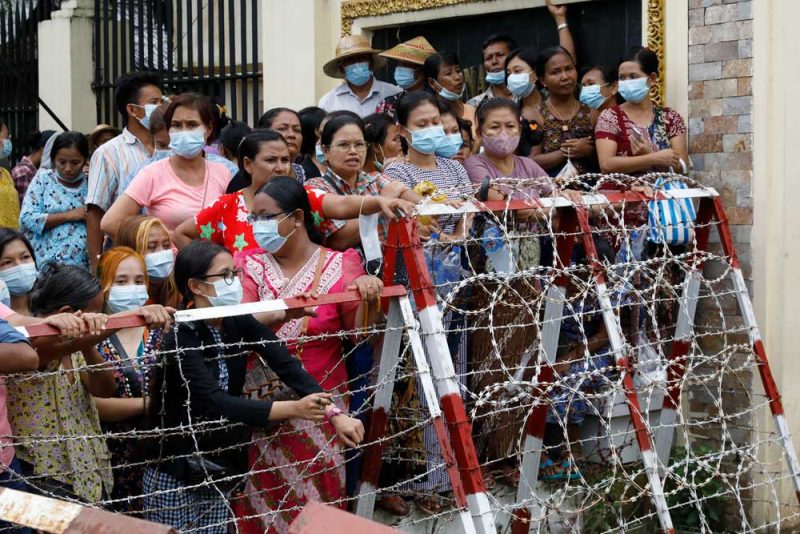 Friends and family members wait, hoping for the release of their loved ones in Yangon. Myanmar's government has released about 2,300 prisoners, including activists and reporters. Photo by a citizen journalist. Source of photo and caption is from Radio Free Asia. Copyright © 1998-2020, RFA.. Used with the permission from Radio Free Asia, 2025 M St. NW, Suite 300, Washington DC 20036. https://www.rfa.org.

Amid a rising national COVID-19 infection rate, the Myanmar military government released 2,296 prisoners on June 30 who were arrested for resisting the February coup. Among those released were 12 journalists charged with either spreading “false news” or agitating the public to commit sedition.

Authorities did not give a reason for the mass release of prisoners, although this was a key demand of many human rights groups and global institutions monitoring the situation in Myanmar. The military government's spokesperson said they released prisoners who joined the protests but were “not in leading roles” as well as those who had not participated in violent acts.

Since the February coup, at least 89 journalists have been arrested for covering the anti-coup resistance. Reporters have faced threats and have even been attacked for their coverage. Journalists who report on the atrocities committed by security forces have been accused of peddling misinformation.

Some of the released prisoners were journalists who were able to share their prison experiences and confirm reports about security forces abusing political prisoners and journalists.

Ko Aung Mya Than, a reporter of Ayeyarwaddy Times, recalled the torture he endured after he was arrested. In an interview with The Irrawaddy, he said:

Eight junta vehicles surrounded my house and I was taken away for interrogation. I was beaten. They punched me in my ribs, face and mouth and slapped my face. Around eight drunken soldiers interrogated me, while accusing journalists of making false reports.

I challenged [the military] in a Facebook live on the day of the coup [on Feb. 1]. So they had a grudge against me and beat me while interrogating me for challenging them.

Ten days after his release, Ko Aung Mya Than was arrested again by local authorities who did not disclose the basis of the journalist's detention.

Ko Aung Mya Than, a #Maubin-based correspondent for the Irrawaddy Times, was arrested by the military on the night of July 10. He was released from prison on June 30 and re-arrested 10 days later.#JournalismIsNotACrime#WhatsHappeningInMyanmar#July11Coup #MyanmarNeedsO2 pic.twitter.com/nQtjfxBSIC

Freelance journalist Ko Banyar Oo was not beaten in prison but recalled the scare tactics used by prison officials. He shared this with The Irrawaddy:

I was sent straight to prison. I was questioned by the police at the prison. I was not beaten during the interrogation. Normally, people who were interrogated [at a police station or interrogation center] before being sent to prison were beaten. The food they gave us inside the prison was not OK. It was lousy and could hardly be called rice and curry. They gave us lectures to suppress our morale and, as we refused to obey prison rules, they put us in solitary confinement.

Aung Ye Ko, a reporter from 7 Days News, told Radio Free Asia that the crackdown on journalists reflected the government’s lack of respect for freedom of the press:

I don’t know about their intentions or why I was released but I’m going to carry on with my profession.

I endured a bit of physical and mental suffering while in there—there were no beatings but a lot of interrogations. I would say they have no respect for the Media Law.

Kamayut Media editor Nathan Maung was arrested on March 8 together with his colleague Hanthar Nyein. Nathan Maung, a United States citizen, was released on June 15 and immediately deported to his country. He told the Committee to Protect Journalists about what was done to him and Hanthar Nyein while under detention:

Without letting me sleep, they interrogated me for three days. I requested water, which they allowed me only on the third day. I had food only on the fourth day. I could hear screaming in the air and kept meditating.

Hanthar was badly tortured. He told me later that they burned his skin with a lit cigarette and put both his legs on a big ice block. Hanthar didn’t reveal his iPhone password, as they demanded, and he was beaten so badly to surrender his password.

Interrogators told him to take off his shirt and pants and attempted to rape him, so he finally gave up. By unlocking his phone passwords, his nightmare didn’t finish.

He added that military officials are blaming the media for their coverage of the resistance:

They thought the anti-coup “Spring Revolution” would die if there is no media present on the ground. They believe the Civil Disobedience Movement happened because of the media.

There is no hope at all for press freedom in Burma under the military’s rule. I believe that the media has a bigger role to play to promote human rights journalism and it is a sense of duty to highlight the humanitarian crisis which is emerging in the country.

Another foreign journalist, Yuki Kitazumi, was arrested on April 18 and spent nearly four weeks in prison before he was released and deported to his home country, Japan. After his arrival in Tokyo, he revealed the plight of political prisoners. He also shared what he experienced during his incarceration:

Even though I wasn't subjected to violence, an interrogator banged the desk hard when I refused to sign a statement containing things I had no recollection of saying. That frightened me.

Despite the mass release of prisoners, the Assistance Association for Political Prisoners noted that more than 4,000 individuals are still in detention for opposing the coup. As of July 8, around 36 journalists remain in prison for covering the protests against the coup.

#Myanmar ?? Arrests of Journalists as of 8 July 2021 since the start of the military coup pic.twitter.com/0oAExL80qZ