Chinese netizens believed that China had COVID-19 under control 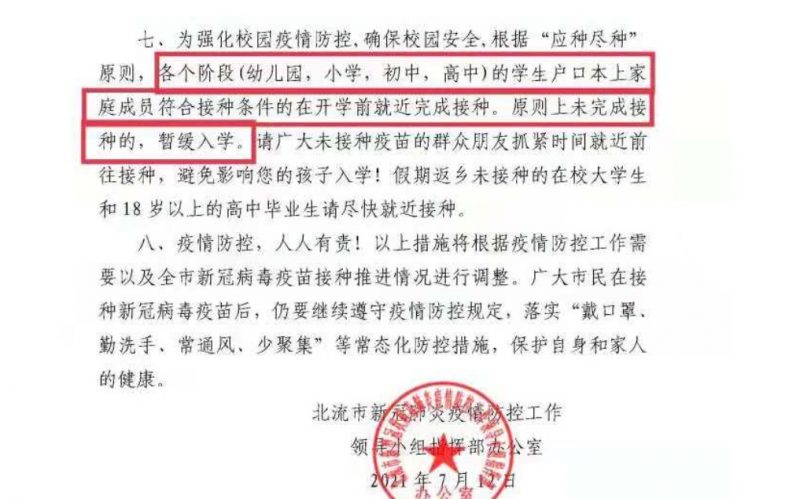 An announcement from Beiliu county, China, demanding all family members of school children must be vaccinated for the children to enrol. Image from Hong Kong-based CitizenNews.

The policy, which was announced without much explanation, came as a shock to many citizens who had been repeatedly assured that China has the COVID-19 pandemic under control, thanks to the flooding of positive news and messages on social media during the 100th anniversary of the Chinese Communist Party in early July.

Below is a celebratory message circulated on Chinese social media on July 2:

#Deeply impressed by the ceremony of the 100th anniversary of the Chinese Communist Party#
No more face mask!
On July 1, in Tiananmen Square, an activity that involved hundreds of thousand people, no one wore a mask.
When the whole world believed that wearing a mask is a violation of human rights, everyone in China wore a mask. When the whole world is forced to wear a mask because of COVID-19, China is the first country to take off the mask.
The story of the mask reflects the true meaning of human rights. A big and strong country with 5,000 years of civilization, we handle things in an orderly manner. A UN organization commented ‘China is now the serenest country’, such serenity comes from our confidence, such confidence comes from self-discipline and self-awareness. All these come from the distinctive gene of the Chinese culture. #We are so lucky to bare witness to this day#

China hopes to reach a 70 percent vaccination rate by the end of 2021. Thus far, the country has given 1.38 billion doses, about 48 percent of its total population. However, the distribution has been rather imbalanced. In big cities such as Beijing, Shanghai and Guangzhou the vaccination rate is more than 80 percent. As for second- and third-tier cities and rural counties, the rate has fallen far behind.

As the Delta variant spreads across Asia, virologists anticipate that the efficacy of the Chinese vaccines may go down by up to 20 percent. However, domestic news outlets quoted China's prominent epidemiologist Zhong Nanshan that Chinese vaccines had been proven effective on variants. Some critics argue that China has yet to release adequate third-stage clinical data about the vaccines, which Zhong attributes to China's lack of COVID-19 patients to test.

A hashtag #凡尔赛發言, meaning ‘a proud aristocratic speech’ was attached to Zhong's speech to highlight China's complacency in fighting against the pandemic.

The new restrictive policy posed a sharp contrast to all the positive messages circulating online in the past two weeks.  In addition, the lack of explanation in the governmental announcement has invited a flood of criticisms. Below is an announcement issued by Jinjiang city in Fujian province via mobile messaging:

All residents above 18 (regardless of the origin of household registration) who have no medical reasons for not taking the COVID-19 vaccine, should be vaccinated.
Beginning July 22, all people above 18 have to show their vaccination record (vaccination label on the city’s mobile health code) before they enter major public facilities in the city.
By July 22, all party members and employees of government and party institutions, as well as their affiliated corporations have to be vaccinated (unless they have medical reasons). Those who have not been vaccinated will not be allowed to go to work.
Starting from August 1, unvaccinated individual without any medical reason will not be allowed to enter medical facilities (except if they are patients), touristic sites, elderly facilities, kindergarten, nursery, schools (including training institutions) and cultural and entertainment facilities.

At the beginning, [the authorities said] vaccination was on a “voluntary base”. Later, it was “non-coercive” and eventually it became “restricting movement”. This is government's credibility? This is socialism?

Although people with medical reasons can be exempted from the restriction, it is not easy to get medical proof. Below is one experience shared on Weibo by @yi-zhang-jing-zi:

Due to my health, I can’t receive the vaccine, but my internship organization demanded medical proof. I went to two vaccination stations and they asked me to go to the hospital. But the doctor in the hospital said that they were instructed not to issue medical proof to the patients. I called the hotlines, but they did not offer me any solution. What should I do? Not all people are in condition to take vaccines!

For those who could not receive vaccines, they don’t have any privacy. Whenever they enter public facilities, they have to explain “I am over 80”, “I have just received a HPV vaccine”, “I am pregnant”, “I have a certain disease”. Who came up with such a bad idea? Something wrong with his brain?

Some are also worried that similar tactics would be applied in other policy areas in the future, such as zhi-tien-shou-wan-zhe says:

Once they manage to achieve a policy objective by means of restricting movement, depriving rights to education, suspending salary and work, in the future, similar tactics would repeat N times. If they apply the same means in other policy areas to force us to comply, what will become of our lives? Whether we have received a vaccine or not, we should resist such a brutal zero sum policy.