What is the Kurultai: Kyrgyzstan's political body based on an ancient nomadic tradition

Reviving an old, unelected assembly to control the political process. 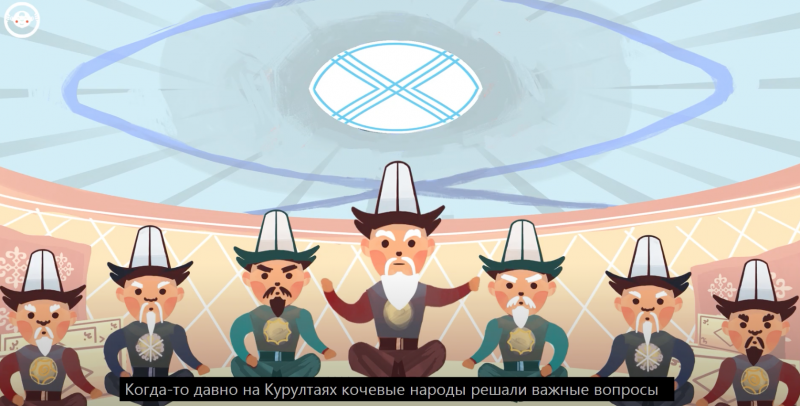 Screenshot from YouTube video from explaining the role of the Kurultai. The caption in Russian translates as: “A long time ago nomadic nations used to solve important issues during Kurultais”

With a more nationalistic government in power since late 2020, Kyrgyzstan has progressively strengthened traditional institutions that had previously been sidelined. The expansion of the power of the president, sealed in a  low-turnout referendum on January 10, now goes hand in hand with the increased relevance of the the Kurultai, a traditional political institution of nomadic nations in Mongolia and Central Asia.

The Mongol empire brought the Kurultai to Central Asia in the 13th century, during its occupation of the the region. From the Mongolian “khur” (to gather), the institution of the Kurultai served as an assembly for local elites to make political and military decisions.

Kurultais were revived in the region after the collapse of the Soviet Union — which had banned it — and they have existed in Kyrgyzstan since 1993, with varying levels of cultural and political relevance.

A fast-paced return to tradition

Askar Akayev, Kyrgyzstan's first president from 1991 to 2005, restored the Kurultai. Yet, in 2004, the Kurultai was steered towards the opposing camp and rubber-stamped the political takeover by Kurmanbek Bakiyev, who became the country's president and further increased the role of the assembly, which was financed solely via private contributions and donations.

In 2010, as he was losing political ground, Bakiyev reorganized the institution into the so-called Kurultai of Consent, which included 750 representatives  from rural districts, urban centers, and various religious denominations.

After deadly ethnic disputes in 2010, the assembly played an important role in overcoming the divisions and rebuilding the nation.

The word Kurultai only appeared in article 52 of the 2010 Constitution, which set out its official status of consultative body. In October 2010, after a referendum and a parliamentary election, the role of the Kurultai became more prominent. Throughout 2011, Kurultais were held at the regional and national level.

In recent years, there has been growing interest among politicians in reviving this institution.

In 2019, members of the Jogorku Kenesh, the Kyrgyz parliament, submitted a draft law “On Kurultai” that would have further strengthened its role.  But the bill was rejected in parliament.

After weeks-long violent demonstrations toppled Kyrgyzstan's government in October 2020, however, a new nationalist government headed by President Sadyr Japarov precipitated a discussion on the Kurultai.

In January 2021, people in Kyrgyzstan voted in presidential elections — solidifying Japarov's leadership — and in a constitutional referendum that essentially changed the form of government from parliamentary to presidential.

In April 2021, a new constitutional referendum enshrined the presidential form of government and gave more powers to the Kurultai.

According to its proponents, the Kurultai would help keep in check the actions of elected individuals by means of clan pressure, with which the Kyrgyz still strongly identify. Supporters of the Kurultai are convinced that, since the government in the country is formed mainly from Kyrgyz, traditional mechanisms of influence on it are necessary. The Kurultai seeks to restore the traditional spirituality of the Kyrgyz people as a system of collective responsibility of the clan (people) for the nominated leaders and the service of leaders to the people. Kurultai is considered as the only mechanism that will force the government to serve the people.

Opponents of the idea say that there is a possibility that this initiative hides an attempt to centralize power around the figure of the president with a ‘pocket parliament’ and the Kurultai at his service. According to the critics, there is no need to turn the wheel of history back; instead we need to look for new modern approaches to solve the issues that have arisen.

The new constitution, approved in February amid alleged irregularities, fails to outline the process by which Kurultai members will be selected. Observers also noted that its mandate is practically indistinguishable from that of the parliament. Ilyana Zhedigerova, a legal expert form the NGO Precedent, told Global Voices that the functioning of the Kurultai is unclear.

We can assume that the Kurultai will, to some extent, duplicate the functions and powers of the Jogorku Kenesh. Kurultai members will essentially be duplicates of parliamentary deputies. But the concrete way in which Kurultai will work is still unknown.

In an interview with the Kyrgyz service of Radio Free Europe, Saniya Toktogazieva, a constitutional law expert at the American University of Central Asia, warned that the Kurultai could lead to authoritarianism.

In authoritarian states, all dictators like such quasi-constitutional bodies. Why? Because they are not elected and not accountable. The Kurultai will always consist of ‘loyalists’ to the president. [Former President of Kazakhstan Nursultan] Nazarbayev, with the help of the People's Assembly, dissolved the first parliament. At one time, [former President of Kyrgyzstan Kurmanbek] Bakiyev wanted to do the same thing. With the help of such institutions, dictatorships were established.

With the new constitution, the Kurultai will have a say in all three branches of government, according to Zhedigerova.

The Kurultai will have the right to initiate legislation, to make proposals to the President about dismissing members of the Cabinet of Ministers. A representative of the Kurultai will serve on the Council for Justice Affairs, which will replace the Council for the Selection of Judges, and the Toraga of the parliament will ensure the interaction of the Jogorku Kenesh, including with the Kurultai.

The Kyrgyz constitution has already been changed 11 times since the country gained independence in 1991. Every president has changed the rules of the game while in power. Japarov did so immediately after taking the top job. It now remains to be seen what role the Kurultais will play in yet another new era for Kyrgyzstan.