Government-appointed rector removed from office in an overnight decree

Erdogan described Bulu as a successful candidate following his appointment. A screenshot from Ulke TV reporting on the removal of Bulu from his office: https://www.youtube.com/watch?v=i4a9b-_W3d4

For months Istanbul's renowned Boğaziçi University has been roiled by mass protests, with faculty, current, and former students demanding the resignation of a new rector appointed by President's Recep Tayyip Erdoğan on January 1. Six months later, in another late-night presidential decree, the government-appointed Melih Bulu was removed from office. The decision was announced via the Official Gazette. 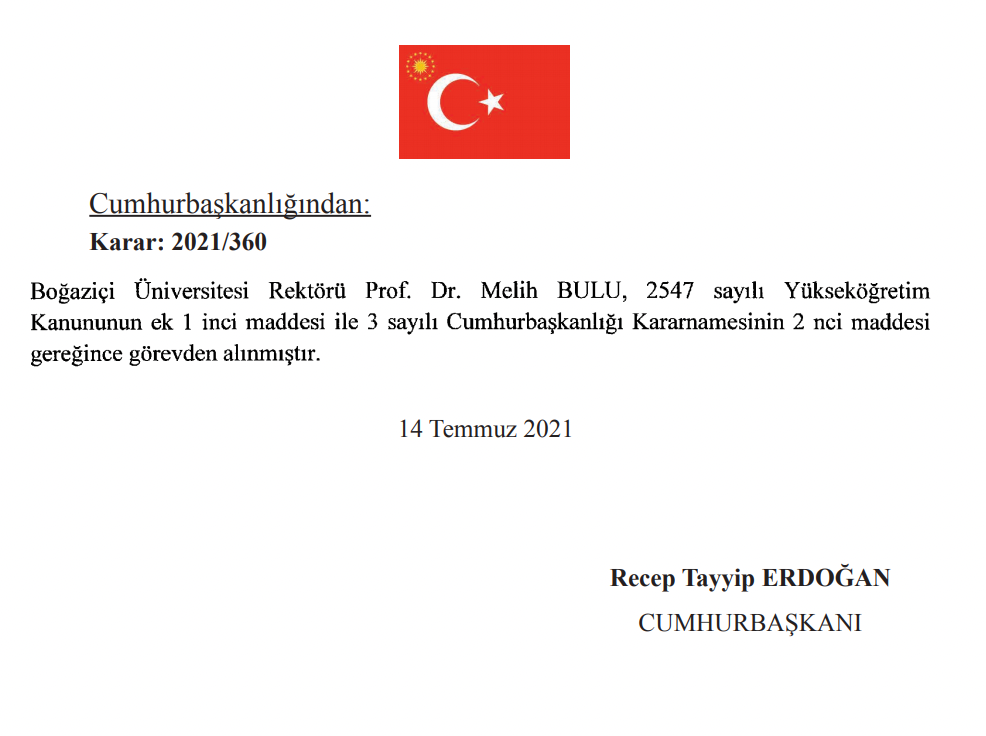 A screenshot of the announcement of Melih Bulu's removal from office. Official Gazette. https://www.resmigazete.gov.tr/eskiler/2021/07/20210715M1-2.pdf

At the time of Bulu's appointment, students and faculty viewed it as another sign of Turkey's democratic backslide and highlighted how Erdoğan had also replaced over 100 elected mayors with government appointees in recent years.

But Erdoğan criticized the protests, accusing Turkey's political opposition parties of orchestrating the disobedience, adding that Bulu was a qualified candidate who was successful in his field. In one of his remarks, he also targeted the wife of Osman Kavala, a well-known Turkish philanthropist who has been in pre-trial custody since 2017. “The wife of this man named Osman Kavala who is a representative of Soros, is also among the Boğaziçi University provocateurs,” he said in February 2021.

As rector, Bulu dismissed demands for his resignation and remained silent about the police violence against students protesting his appointment since January of this year. “This crisis will die down in six months,” Bulu told reporters in February. His appointment was not approved by the University Senate, one of the university's guiding principles.

To bypass the need for a Senate majority, Bulu appointed himself dean of the university's faculty of communications, which was established by a Presidential decision during Bulu's time in office. He also skipped campus elections and consultation with university departments when appointing faculty members to new positions.

In June Bulu suspended classes offered by part-time lecturers. Among them was Feyzi Erçin, a lecturer in the Western Languages & Literature department who taught classes in the Film Studies Certificate Program. Erçin had been offering legal counseling services to students who were arrested during police raids.

The most recent measure Bulu took was to close down all university entrances and exits earlier in July under the “health and security risks.” As a result, all faculty members were prevented from entering the university premises while students were battered by the police outdoors.

According to T24, an online news platform, Bulu refuted the claims of his removal via his Instagram account but later removed the story and shared the picture of President Erdoğan while his Twitter account still described him as “Rector, Boğaziçi University.” 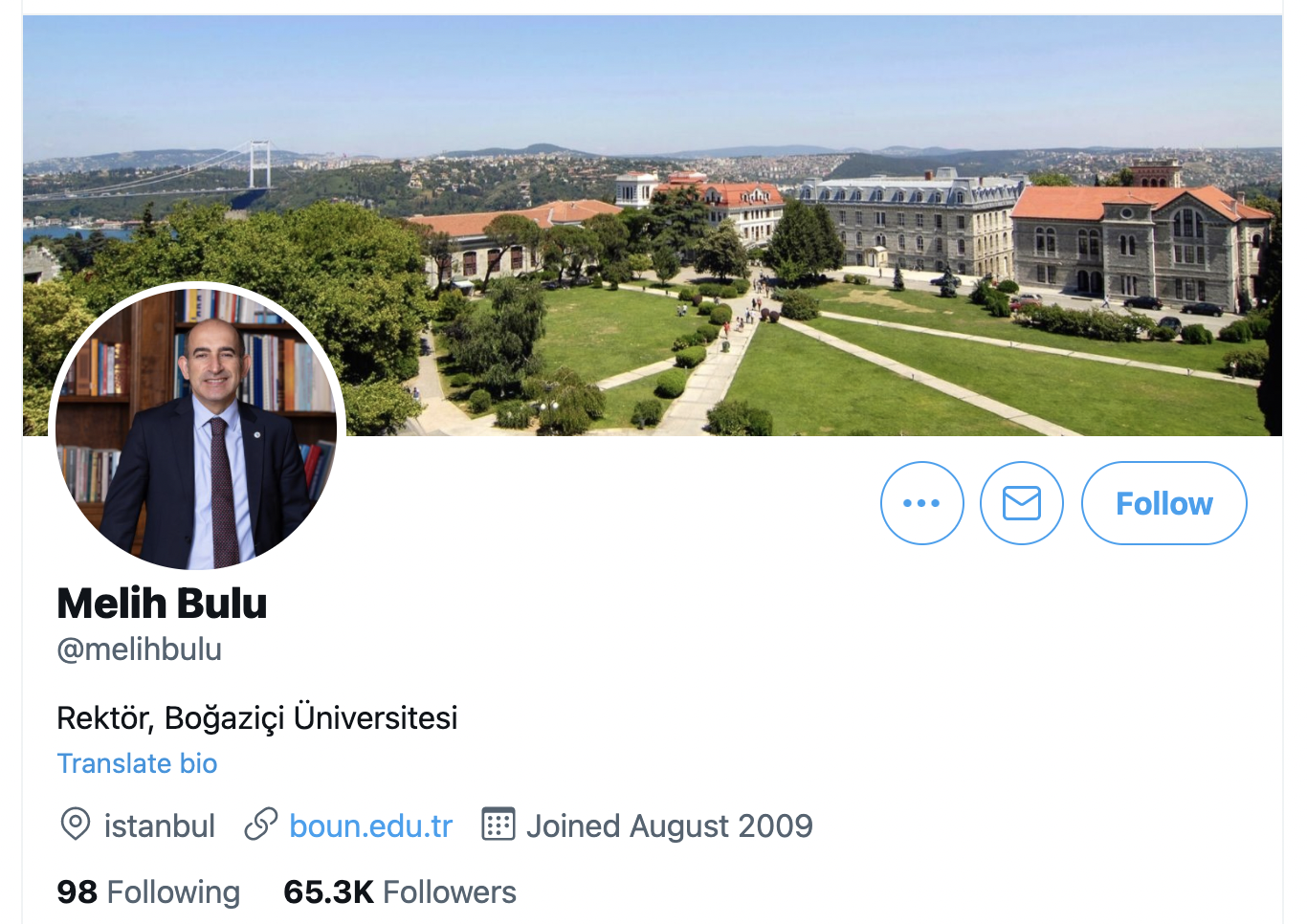 Screenshot from Melih Bulu's official Twitter account, taken on July 15 following the announcement of his removal from the office.

#MelihBulu was trending on social media on the morning of July 15.

During this hard to believe period, students were detained, some lost their scholarships, students/teachers were declared terrorists, new faculties were created, and Melih Bulu was advertised as the man who brought coffee machine to Turkey. Why? Clearly for one fat, nothing.

Many congratulated the university's faculty and students for their courage and continued resistance.

The Boğaziçi university resisted with its academic cadre and students. Melih Bulu is no longer the rector. Congratulations. Next is to resolve this anti-democratic appointment business.

My deepest respect and congratulations to the students and teachers at Boğaziçi University who peacefully protested the newly appointed rector for over 6 months. May the removal of Melih Bulu be a victory for academic freedom and the university’s independence. pic.twitter.com/DACyqVZJdL

They resisted and won. Congratulations Boğaziçi. Just as he was appointed 7 months ago, Melih Bulu was removed from office with a Presidential decree.

Discussions now loom about who will be the next rector, as shortly after the announcement, a Boğaziçi solidarity group tweeted that the university will continue its resistance against any undemocratically appointed rector.

We won't accept a new government appointee from the university or outside, replacing Melih Bulu. We call on all university constituents to election.

The group also said they will continue to expose and demand accountability from the security personnel on campus and police officers who committed violence against students during the protests earlier this year.