"The green tide" for women's reproductive rights gave them a boost 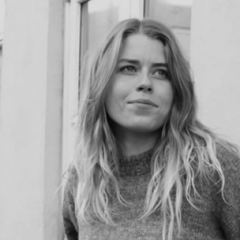 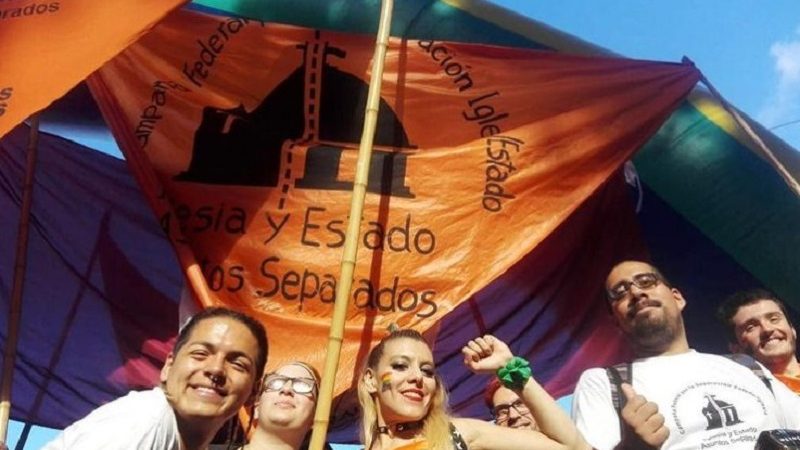 Militants from the Federal Campaign for Separation of State and Churches at Pride March, June 2018. Photo by Leonardo Miranda Quiroga, posted on Instagram and used with permission.

In January 2021, after abortion was legalized in Argentina, the orange handkerchief movement, the symbol of the campaign for State-Church separation, emerged with a renewed force.

Within a few weeks, the group behind the orange campaign received numerous inquiries and new supporters through its profiles on social media. It also initiated information campaigns, provided information on the process of formally leaving the church, and shared complaints of abuse of power, genocides, religious interference in education and law, and child abuse or its cover-up. They also gave interviews with figures from different social and political sectors.

We are aiming for the final separation of the state and the church! Join our movement from your province! #secularstate #LegalAbortion2020 #ItWillBecomeLaw #orange #priests #differentmatters #secularism #equality pic.twitter.com/Zj2rr7b5bR — Fed. Campaign for Seperation of State/Church (@CampEstadoLaico) January 2, 2021

With the slogan “Church and State: Different Matters,” this campaign fights for the establishment of a secular Argentine State that does not allocate public funds for the Catholic Church. Above all, the movement wants a state where religious beliefs — Catholic or otherwise — do not shape policies that affect the full exercise of rights. It is not only religious lobbying, but history shows that legislators have used religion as a reason to vote against basic human rights, such as divorce, same-sex marriage, the Gender Identity Law, the right to abortion, and comprehensive sexual education. In return, they receive support (and votes) from people who share those beliefs.

Nicolás Panotto is a theologian and the managing director of Otros Cruces, an NGO that advocates for religious freedom in harmony with democracy. He explains the campaign's boom:

Already at the beginning of 2018, a general indignation arose when we found out about the 130 million pesos (about 4.6 million dollars) granted by the Argentine State to the Catholic Church to cover the salaries of the Curia, seminary studies and other “philanthropic” expenses. But the debate on abortion has shown that the inherent relationship between the State and Church goes beyond the financial, as it meddles in treatment of public policies, where individual (and religious) interests should not be determinants.

One could say, then, that the orange campaign arose from “the green tide” fighting for abortion rights. The orange campaign quickly became visible during the first debate in 2018 about the Voluntary Interruption of Pregnancy Law, where it reacted to the strong pressure of the church during the debates and the voting as well as to speeches marked by religion that prevailed among those who opposed the law.

When it comes to separating the state from the church, we tend to think only of the Catholic Church. However, the campaign emphasizes “churches” (plural). The latest survey of religious beliefs in Argentina, carried out by CONICET, shows that the number of people professing Catholicism is decreasing, while the number of people practicing the evangelical religion, with much more conservative doctrines than the Catholic one, is increasing. This gives leaders and representatives in Latin America a greater push in political and social power: in 2019, they presented more than 200 candidates on the electoral lists for various positions.

The struggle for a secular Argentine state dates back to the beginning of the republic in the 1800s, followed by another struggle after 1950. This recent campaign began with a Facebook group created in 2018 by Taty Barranco, feminist militant and activist for human rights, diversity, and gender. The aim of the group was to bring together people who felt uncomfortable or aggrieved by the imposition of religious dogmas in public and private educational settings.

Coming from Salta, one of the most religious and conservative provinces in Argentina, Taty spoke to Infobae about the strong religious influence in their life:

My mother grew up in the countryside, in a very conservative place in Salta. She was raised by a very religious woman, who always exercised psychological violence on her with a rosary in her hand. […] She became pregnant with me at age 19, and the violence by that woman worsened. Why? Because of the religious and moral dogma that state that if you get pregnant young, you are a prostitute.

In a few days, the Facebook group created by Barranco reached 40,000 members, which raised the need to organize and divide tasks. Together, and inspired by the green handkerchief, they came up with the design and color of the scarf. This is how the orange handkerchief was born.

Little by little, they created committees and regional movements to spread the activism and to make the campaign more nationally and geographically diverse. Its members are of all political, social, and even religious affinities, but with a common vision: that religious institutions and beliefs should be limited to individual life choices and be kept away from public affairs that affect the lives of citizens as a whole.

One of the focal points of the campaign is the apostasies — the formal renunciation of the link with the Catholic institution consecrated in the sacrament of baptism. It is an individual but very important symbolic action, and many people approach the campaign asking how to apostatize and stay to support the cause.

Another focal point is the Secular Public Space initiative, which registers and denounces the presence of religious monuments and symbols in non-religious public spaces, such as squares, parks, courts, hospitals, train and subway stations, offices, universities, and public schools.

Because it is a self-organized group, it still does not have legal status nor does it receive financial support from the state, from supporters, or from private individuals. The group consists of people who voluntarily contribute their time and knowledge and who organize themselves mostly through social networks.

They recently joined the coalition Argentine Secular Organizations (OLA), created in March 2021, hoping to join forces and ending the privileges of the religious institutions and their representatives by repealing all laws and decrees, including Article 2 of the National Constitution, which state that “the federal government supports the Roman Catholic Apostolic faith,” to eliminate pecuniary benefits paid out of the pocket of the State (that is, of its taxpayers).

At the moment, the orange campaign is focused on spreading activism, becoming known, attracting militants and support, building alliances, and informing and educating the public with varied material of high quality through their accounts on Twitter, Facebook, and Instagram, hoping to grow and expand throughout Latin America, as the green tide did.

Although they have made significant progress this year, the system that they seek to change is still very solid, and it is so deeply embedded in the social and cultural matrix that, at times, it is invisible to many people. The aim of the group was first expressed by Barranco in an interview with the medium La Tinta:

We are interested in making the information viral and initiating the debate, because what is unseen, is unknown. 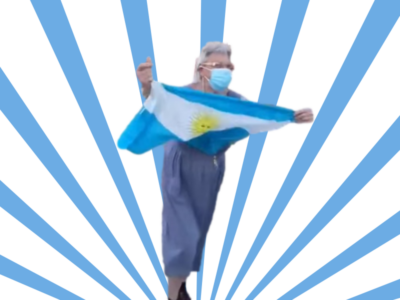