The Awá people try to resist for their families and their territory, Katsa Su

Indigenous guards of the Awá people. Photo by Silvio Fernández, used with permission.

This report was originally published on Servindi, edited by Global Voices.

In Colombia, the Awá people and their land are in the middle of an armed and socio-environmental conflict caused by other people, but with victims of their own. On Monday, June 7, another three community members were killed by an illegal armed group, one of many recent attacks.

The violence continues even though a peace deal was signed in Colombia in 2016. The Constitutional Court of Colombia and the entity in charge of administering transitional justice in the Colombian armed conflict, the Special Justice for Peace (JEP), recognized the Awá people and their land—which they call Katsa Su (Great Territory)—as victims of that conflict. The Awá people are displaced and looking for solutions to survive.

Silvio Fernández, community member of the Magüí Reservation of the Awá people in Ricaurte Nariño, explains:

Although it is true that human rights institutions and organizations are aware of the reality of the armed actors in the territory and each one of them fulfills its mission of monitoring violence, in the last year we have had massacres.

The Awá people, one of the approximately 115 Indigenous peoples in Colombia, live in the southwest of the department of Nariño and the northwest of Ecuador in an area of approximately 610 thousand hectares. There are more than 29,000 people, most of whom live in Colombia. From January to April 2021, 41 Awá people were murdered during clashes between armed groups. The exact figures of the massacres perpetrated against the Awá people in recent years are unknown.

In 2019, the 32 councils part of the Indigenous Unit of the Awá People (UNIPA) and its territory, Katsa Su, were recognized as victims of the armed conflict due to the violent actions between 1990-2016, allegedly committed by the FARC guerrillas and the Public Forces.

At present, the Awá people have not only been victims of forced displacement and the dispossession of their lands due to the arrival of people (‘settlers’) from other regions of the country, but also of the armed actors who are disputing control over territory to exploit it through the illicit coca cultivation, mining, logging, megaprojects, fossil fuels, and other monocultures, such as oil palm. Currently, they are also facing the resumption of aerial campaigns spraying glyphosate, a herbicide used to eradicate the coca plant and that can have a negative impact on health, including causing cancer.

This year, through several published statements, the Awá people disclosed the violent actions of legal and illegal armed groups, which continue to occur: forced displacements, homicides, arbitrary detentions, antipersonnel mines, forced recruitment, confinements and lack of freedom to travel, harassment, and massacres that prevent them having a relationship with their Katsa Su as they learned from their ancestors.

“Katsa Su and the Awá people are one”

The Awá people consider that any violent action against their territory, Katsa Su, is also violence against them. Leidy Pai, an Awá woman, explains:

Being part of Awá families, I believe that any situation that affects the territory, the social, cultural, and spiritual fabric of our people and our Awá families implies being a direct victim.

The violence against the Great Territory affects everyone. As Leidy says:

The territory is damaged in a way that cannot be understood or explained because we the Indigenous peoples believe in spirits that live there, we coexist with them. These massacres and all this bloodshed which have tortured entire families, which have taken children from the wombs of two women, bring disharmony. 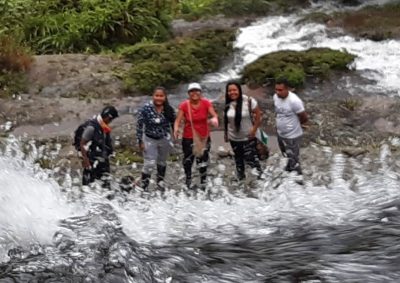 The consequences of forced displacement

This violence disrupts dreams and life projects. When Awá people are forcibly displaced, they leave behind their Great Territory, their culture, and the fields they cultivate. In Pasto, the capital of the department of Nariño, where some displaced people arrive, they miss taking care of their animals, cultivating the land, and cooking on the stove, activities that they cannot do in the city.

Claudia Pai, Counselor for Women and Family in the Indigenous Unit of the Awá People (UNIPA), states:

In the city it is difficult for children, and women are more vulnerable. Their role of transmitting the cultural legacy to their children and being with their family is broken because they must work abroad, and sometimes they are being taken advantage of due to their condition as victims and displaced people. It is necessary for the government to help with reparations and humanitarian aid because those who cannot read and write are in an even worse situation.

The inhabitants are frightened, and their travel within the Katsa Su is restricted. They live in distress, and they cannot cultivate the fields used by armed actors. There are some places on public roads that are restricted, and there are just certain hours when they can travel due to the dangers posed by armed actors.

Militarization is another negative effect. As Leidy Pai recalls:

The army reaches places where we, the Awá people, had not walked. They arrived at some pristine places, virgin forests. They knocked down trees to land their helicopters.

Aura López, a 35-year-old member of the Awá community who lives in Resguardo Nunalbí Alto Ulbí in the municipality of Barbacoas (Nariño), has been verbally threatened several times and forcibly displaced to the city of Pasto. She opposes the forced recruitment of minors by armed groups. She explains it this way:

However, the Awá people resist. As explained in the Ethnic Safeguard Plan of the Awá People, the constant actions against them have led them to organize themselves, by establishing UNIPA, the Main Council Awá de Ricaurte (Camawari), and the Association of Awá Indigenous Councils from Putumayo (ACIPAP) to carry out joint actions in support of their community.

An alternative of resistance is not to make the mistake of moving from one place to another, but to implement the Indigenous guards as a social and territorial control, and to train them. In Ricaurte, we have meeting sites in educational establishments, which are suitable for accommodation of people. We encourage them to bring their own food so as not to depend so much on others, because in case of bombings and combats, they cannot go out to buy supplies.

Another measure is to comply with the peace agreements, the Law 1448/11 on victims and the Decree 4633/2011 on a reparation plan with an ethnic and gender perspective. The judicial system is slow to meet the needs of Indigenous peoples.

Lawyer Buitrago from the Colombian Commission of Jurists agrees:

The implementation of the Final Peace Agreement is essential, mainly the application of the section on substitution of illicit crops, which keeps these communities in constant confrontation with the armed groups in Nariño and Putumayo by denying drug trafficking, and which is changing the social fabric and the Awá cultural preservation.

The Awá people resist in the midst of a conflict that affects their physical health, their culture, their customs and their ancestral spiritual relationship with other beings that inhabit the Katsa Su. Faced with this destruction, they still plant, try to defend their food sovereignty, and recover traditional medicine until justice arrives and guarantees that this will never happen again to them.