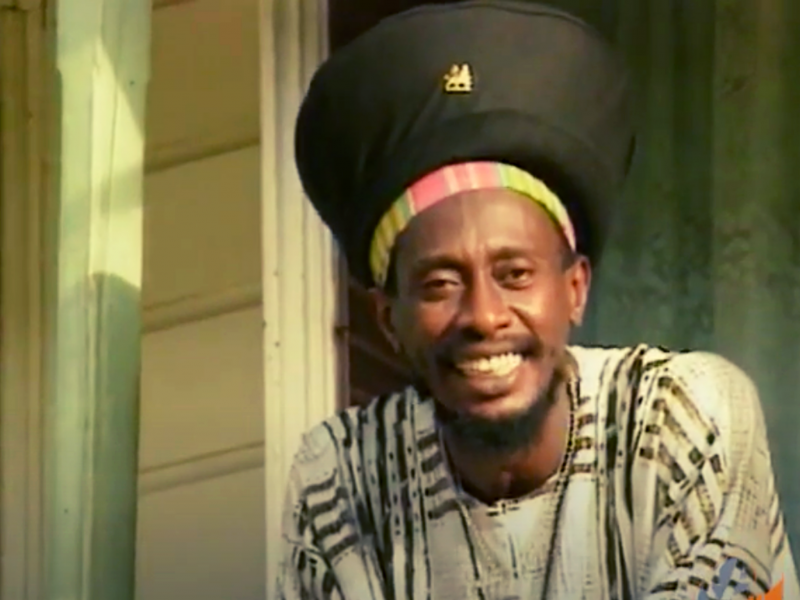 Screenshot of Brother Resistance from the video “Never Ever Worry”, filmed by Earth TV (1997).

To Trinidad and Tobago, Brother Resistance was much more than an artistic icon; he was a fount of cultural knowledge. With his passing at a private hospital on July 13 (he had been ailing for some time), the country has lost an elder of its musical artforms—calypso and soca, to be sure—but more specifically, its hybrid, rapso.

Part poetry, part scintillating backbeat, rapso is defined as “the power of the word in the rhythm of the word,” having grown out of the West African griot or storyteller tradition. In the Caribbean, these musical poets have been traditionally referred to as chantwells, champions of call and response.

Born Roy Lewis in east Port of Spain, Trinidad, in 1954, Brother Resistance, as he would most popularly come to be called, eventually changed his name to Lutalo Masimba to better reflect his African heritage. He received his secondary education at the prestigious Queen's Royal College, famous for producing figures such as Eric Williams, the country's first prime minister who led the country to independence from Britain (also a notable historian), and writers C.L.R. James and V.S. Naipaul. The school inducted Brother Resistance into its Hall of Honour in 2017 in recognition of his contribution to culture and the arts.

Rapso music was pioneered by the late Lancelot Layne, evolving as a brand a protest music out of the Black Power movement of the late 1960s, during which the country experienced a period of social unrest that culminated in a failed revolution attempt in 1970. Brother Resistance, along with the Network Riddum Band, took up the rapso mantle and carried the form into the 1980s and beyond, spearheading its revival and bringing it into the mainstream of World Music.

The band's 1981 debut offering “Busting Out” contained two tracks, one written by Brother Resistance, and became a hit. The following year the group released “Roots of de Rapso Riddum”, but their message, deeply rooted in social commentary, was deemed subversive. Police raided and destroyed their band room in June 1983, which only served to fuel their sense of purpose. They continued to release music, always putting the genre front and centre: “Rapso Explosion” (1984), “Rapso Takeover” (1986), and “Rapso Uprising” (1989).

Brother Resistance continued to be prolific as a solo artist well into the 1990s and 2000s, singing on themes of love, unity, spirituality, and respect for “Mother Earth”, a song that demonstrated just the depth of his perception and vision. Long before the term climate change was coined, Brother Resistance was asking, “Is it too late to save the earth?”

Perhaps his most beloved song, however, was “Ring De Bell”, in which he symbolically advocates for ringing the bell—part of Spiritual Baptist, Orisha and other religious traditions—for culture, justice, freedom and, of course, rapso: “It's a long, long time now we fighting for freedom, victory bound to come […] I come with my bell just to second the motion, rock the rapso riddum.”

Brother Resistance's work provided a strong foundation for other rapso artists, most notably the group 3 Canal, who posted the following on Facebook:

‘Resistance the father, I am the son and in the name of Rapso, Thy kingdom come…’ Stannyman sang in one of our songs a long time ago and truer words were never spoken. If wasn’t for Brother Resistance, we would not be who we are today. We sang backgrounds on your songs before we even recorded our own. You were always inspiring and encouraging and accessible and humble and rooted and real and wise and committed and strong. Give Thanks for the example and walk Tall in the realm of the ancestors. Rest In Peace Big Brother. ‘Stand firm for yuh Roots and yuh Culture.’ […]

Not many have walked your road. Thank you for opening the many doors you did. RIP

Wow, at a loss for words right now. Brother Resistance was a titan and along with the Network Riddim Band had a major musical influence in my life…on par with Prince, Van Halen etc….Ring D Bell in Peace Brother ✊????

In a telephone interview, Robin Foster, who attended Queen's Royal College with Brother Resistance and later worked with the Network Riddum Band as a sound engineer, remembered him as a true poet who would mix his love of language with music:

He was the chantwell of the school. At cricket and football matches, he led the chant and would always compose the school songs for Intercol [the secondary schools football league]. He used to deejay at school bazaars. I'll never forget seeing one of his party flyers promoting what was called ‘The Cold Concrete Network’. He took that concept of networking and ran with it.

Brother Resistance opened a business, Uprising Culture Shop, in what was known as the People's Mall on Frederick Street, in the heart of Trinidad's capital, selling local craft and music. He also opened a branch in London's Ladbroke Grove, where he lived for a spell and made records. Upon his return to Trinidad, he and the Network Riddum Band did a series of successful shows in Port of Spain, which featured fellow artists like Ras Shorty I, known as the father of soca music, and Merchant, both famous for pushing the limits of the calypso genre.

For Foster, though, one of Brother Resistance's most enduring legacies was his embracing of “Trinbagonian” as its own language:

Resistance was a bright, highly educated man, and he regarded our way of speaking as more than a dialect, more than broken English — and that was really important at a time when anything but standard English was considered uncultured. The way we speak may be English-based, but it includes influences of French Creole, Spanish, Hindi, all with a distinctive West African phrasing. There's a line in Lancelot Layne's hit ‘Blow Way’ that goes, “Don't believe what foreigners do is better than you because that ain't true.’ Resistance was proud to be Trini. His standard greeting was ‘Rapso time!’ His love of calypso, in all its forms, and of local language and expression, was his real contribution.

Having completed his tertiary education at The University of the West Indies (UWI), Brother Resistance was awarded a Master's degree in Carnival Studies from the University of Trinidad and Tobago in 2012, and was in the process of completing his Ph.D. at UWI.

Social media users were unanimous in their characterisations of him as a kindhearted, gracious and humble man. Until his death, he was president of Trinbago Unified Calysonians Organisation (TUCO), which paid him homage as “a cultural activist and a Rapso artiste of international repute” as well as “a cultural activist, researcher and educator”:

[Brother Resistance] was a hardworking, diligent and futuristic President. He cared deeply about the welfare of our members. He pushed for recognition of calypso and rapso music on the international stage, […] foresaw an Organisation that [would] be self-sufficient and worked day and night in realizing this vision. [He] was a true patriot, a leader, and loved his country.

Resistance may have brought rapso music to the world, having toured throughout the Americas, Asia and Europe, but he was at heart a poet, authoring “Rapso Explosion”, a collection of rapso poetry that was published in the United Kingdom. In 1992, he received a national award, the Hummingbird Medal (Silver), for his contribution to the culture and community development.

Tillah Willah, who hosts The Wajang Diskotheque, a virtual space where she jams local tunes and has fascinating conversations with the music makers, concluded: