Macau bans 21 opposition candidates from campaigning for the Legislature

The seven criteria for screening Macau candidates' allegiance are unveiled. 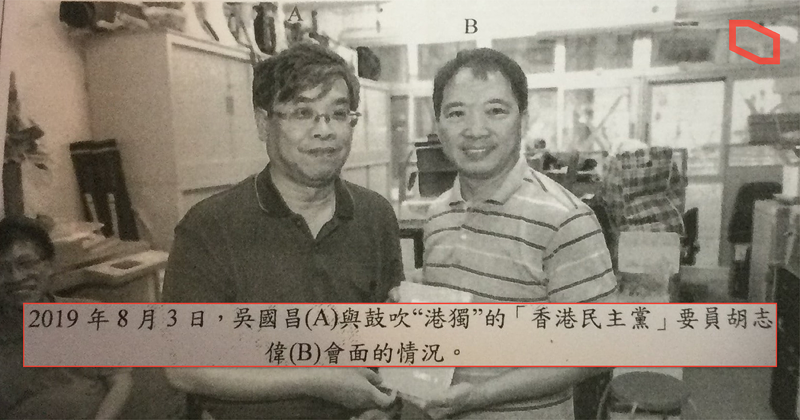 This photo of Antonio Ng shaking hands with HK politician Wu Chi Wai was presented as ‘evidence’ to disqualify him from running for the Macau Legislature. Image via Stand News.

The Macau government disqualified 21 democratic candidates from running in its upcoming legislative elections.

Following the disqualification announcement made on July 9, Beijing's Hong Kong and Macau Affairs Office expressed support for Macau's decision and stressed that it is necessary to uphold the principle of ‘patriots governing Macau’.

The opposition groups were shocked by the decision as some of the disqualified candidates have been serving in the legislature for years. For example, Antonio Ng Kuok-cheong,  the founding chairman of the pro-democracy party the New Macau Association, has held office through direct elections since 1992.

Although the 21 candidates had previously pledged that they uphold Macau’s micro-constitution, also known as the Basic Law, and are loyal to the Macau Special Administrative Region (SAR) region, the electoral affairs officials claimed that they had ‘factual evidence’ provided by the Secretariat for Security which proved their vows were not genuine.

The 2021 elections of Legislative Assembly of Macau will take place on September 12. The law-making body has 33 members, with 14 directly elected, 12 indirectly elected and 7 appointed. The pro-democracy camp only had four seats — won through direct elections in 2017. The 21 disqualified candidates were to compete for six seats in September.

Antonio Ng Kuok-cheong, who started serving in the legislation before the former Portuguese colony rejoined China in 1999 and continued his service after the Macau national security law was enacted in 2009, believed the decision was political. In an interview with Hong Kong Free Press (HKFP), he rebuked the Macau electoral affairs officials’ claim:

Of course, if this is a forceful political decision, there will be no effective appeal […] I’d imagine that this is of course related to the situation in Hong Kong, as [disqualifications] are common there, and with the national security law, suppression became stronger, it is no surprise that their approach [to the two cities] appears identical.

Both Macau and Hong Kong are ex-colonial cities that were unified with China under ex-Chinese government leader Deng Xiaoping’s ‘One Country Two Systems’ degree which offered each city a ‘high degree of autonomy’. China expected that the implementation of ‘One Country Two Systems’ in Hong Kong and Macau would serve as a model for their eventual unification with Taiwan — a de facto independent state since the Kuomingtang people escaped to the island in 1949 upon its defeat in the China civil war.

Beijing's reinterpretation of ‘One Country, Two Systems’ in Hong Kong

However, in the midst of Hong Kong’s 2014 pro-democracy movement, the China State Council published a white paper on ‘The Practice of the “One Country, Two Systems” Policy in Hong Kong Special Administrative Region (SAR)‘. The policy paper redefined high autonomy as ‘the power to run local affairs as authorised by the central leadership’ and sets ‘patriotism’ as a criterion for people serving in public offices.

Upon the enactment of the national security law on June 30, 2020, four more opposition lawmakers were disqualified which triggered a mass resignation of pro-democracy lawmakers in November 2020 in Hong Kong.

Then in March 2021, Beijing further imposed a new election system in the Asia financial centre which includes establishing a candidate screening system, expanding the power of the Chief Executive Electoral Committee (EC) to ensure Beijing’s representatives were the dominant power, reducing elected members in the Legislative Council and EC.

While Hong Kong has a strong democratic movement, Macau’s opposition parties are relatively weak and have little influence in policymaking and public opinion. Also unlike Hong Kong, Macau passed the National Security Law back in 2009 and the allegiance of the opposition has never been questioned.

The disqualification of the 21 candidates will purge the Macau Legislative Assembly of all opposition voices.

Sulu Sou, a current lawmaker who has been disqualified for running this year’s elections expressed his shock on his Facebook page:

Today we are indignant and sad. The Legislative Assembly in Macau has 45 years of history. Since 1976, we have had direct elections and in the 1980s the Chinese citizens in Macau have obtained the right to vote. The government’s current decision has tainted Macau's election history. Among the 159 candidates, 21 have been disqualified, the ratio and scale is huge and this won’t be ignored by the world.

I am shocked because I know some of the disqualified [candidates]. I always follow what they say and some of them have been legislators and for decades have been contributing to Macau […] I am very concerned when it is stated that they are not loyal and do not love Macau. The fact that they have different ideas and opinions from some of the authorities does not mean that they do not have the right to have them. When the Basic Law states that there is freedom of expression, we can think up some restriction to that, but one thing is for sure, freedom of expression means the right to think differently…

Tong explained that ‘evidence’ cited to disqualify the candidates involved acts or speech that:

Antonio Ng managed to acquire his disqualification document which is composed of more than 200 pages of ‘evidence’ including examples such as him taking a photo with Wu Chi-Wai, former Hong Kong lawmaker and ex-chairman of the Democratic Party on August 3, 2019. The party was labelled as ‘pro-Hong Kong independent’ in the document (see top photo).

Under the above criteria and screening mechanisms, all opposition would be banned from the Macau Legislative Assembly. The same set of screening criteria may also apply to Hong Kong in the upcoming Legislative Council elections in December.