Turkey's spectacular city statues — a thing of beauty or an architectural failure? 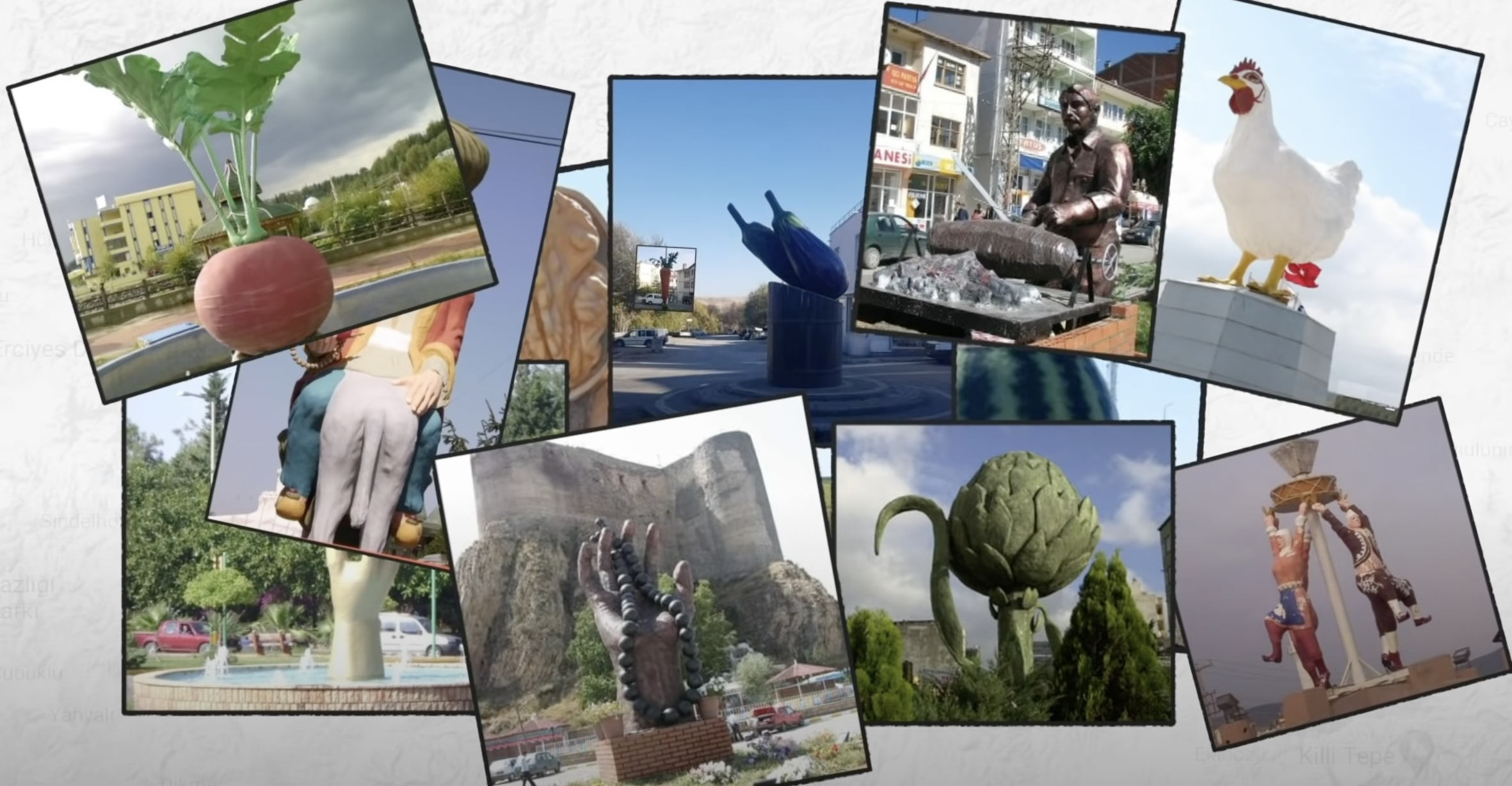 A screenshot taken from a BBC Turkce video about city statues across Turkey https://www.youtube.com/watch?v=qc4QN6SVZHs&t=2s

Turkey is known for its plethora of historical sights and impressive monuments that offer visitors plenty to see and explore, but few are aware of the spectacular city statues standing at the entrance of Turkey's provinces and city centers. All across the country, one can spot eclectic statues of a garlic clove, a rooster, meatballs, local desserts, walnuts, pottery, and much more, symbolizing whatever that province is famous for. The most recent addition to the list of bizarre statues a child inside of a watermelon that was placed in Turkey's Diyarbakir province in May.

Created in honor of the region's watermelons and the tradition of photographing babies in carved-out watermelons to highlight the size of the fruit, the statue, sparked criticism online and triggered a debate around Turkey's penchant for bizarre statues and their hefty price tags.

According to the Gazete Duvar, an online news platform, “one social media user asked the municipality to reveal the cost of the bizarre artwork, as well as the statue of a man displaying a local sweet that was revealed at the same time. The municipality is currently run by a government-appointed trustee, who is known for extravagant spending without any transparency.”

This is not the first time, the costs for erected statues have been questioned.

In the Turkish province of Amasya, the local mayor was quick to defend a statue of an Ottoman prince taking a selfie when an opposition politician grumbled about the waste of public funds.

I think this is the world's first selfie taking statue. It deserves an award.

In 2015, the three-meter-high, ten-meter-long T-Rex statue erected in Turkey's capital Ankara reportedly cost 1o million Turkish Lira (with the currency exchange rate at the time, about 4 million US dollars). The T-Rex replaced a controversial Transformers statue — both statues were commissioned by the city's then-mayor and eccentric member of the ruling Justice and Development Party, Melih Gökçek.

The robot statue was erected as part of a promotion campaign for the AnkaPark theme park (also known as the Wonderland Eurasia park). The park, which featured robots and dinosaurs was commissioned by Gökçek and cost some 750 million US dollars according to Ahval news. But Gökçek never made it to the opening as he was forced to step down in 2017. President Erdogan who attended the opening of the park in March 2019, described it as a “symbol of pride for Turkey.” But the “symbol of pride” never lived up to its expectation as the park was forced to shut down in February 2020 when the company charged with managing the park failed to pay its electricity bills.

The budget for these statues is not transparent and is often associated with corruption at the local government level. In an interview with the BBC, Turkish city planner Meltem Parlak said, in order for the process to be transparent, “the municipality should first consult with a sculpture maker, or organize an open contest, and then make a decision. Instead, municipalities simply assign certain companies in a so-called tender, creating an environment for corruption.”

Most of these statues are commissioned through private companies according to the Turkish Hurriyet newspaper. But not one of the organizations contacted by the paper was willing to claim a specific statue. Instead, they too blame the municipalities for the poor work which damages the reputation of the companies. “Municipalities are not paying attention. They should consult with an artist, hire a consultant. But they don't. As a result, we are also criticized,” said Yakup Koçak, an owner of a small studio which provides made-to-order sculptures.

Former dean at Marmara University Fine Arts Faculty and the founder of Baksı Museum Hüsamettin Koçan also agrees that authorized institutions have a responsibility to seek out experienced, trained artists. “If we care about the contribution of art to the city, the authorities must accept that the subject of art and aesthetics is a field of expertise and act accordingly,” he told Hurriyet in an interview.

So far, there is little responsibility or accountability for the spending or the aesthetics of statues which is likely to continue to trigger jokes and criticism from those who encounter Turkey's modern wonders blooming across the country.