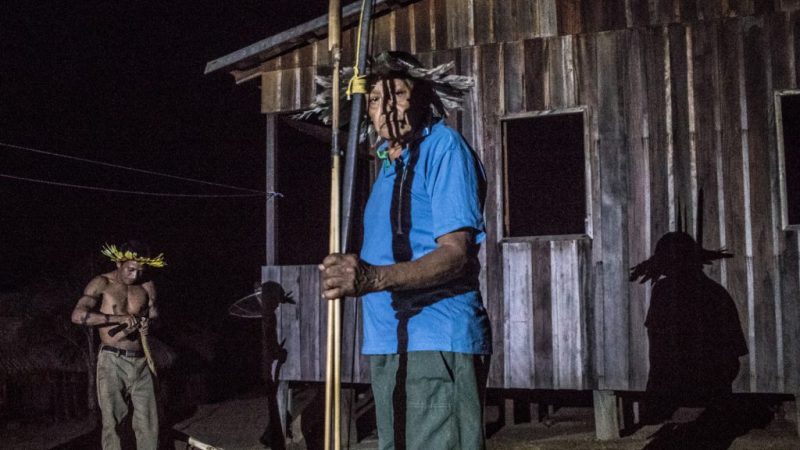 Indigenous people received “early treatment,” with medicines not recommended by the WHO | Photo: Gabriel Uchida/Amazônia Real

This article was written by Luciene Kaxinawá, originally published in February 2021 and republished here under a partnership between Global Voices and Amazônia Real.

“Our father fought hard, he was a warrior, and we will continue his fight.” This was the message from Borehá, Maitá, and Mandeí about their father, the Indigenous leader Aruká Juma, who died from Covid-19, on February 19.

His family and allies of the Juma people think that Aruká was between 86 and 90 years old — his exact age is unknown, as he had no birth certificate. The Juma people's territory is located in the southern part of the Amazonas state, a forested region under intense pressure from deforestation.

“Coiab and Apib warned that recently contacted Indigenous peoples were at extreme risk. The last surviving man of the Juma people is dead. Once again, the Brazilian government has shown itself to be criminally negligent and incompetent. The government killed Aruká,” said a statement signed by Indigenous organizations such as the Coordination of Indigenous Organizations of the Brazilian Amazon (Coiab), the Coordination of Indigenous Peoples of Brazil (Apib), and the Observatory of Human Rights for Isolated and Recently-Contacted Indigenous Peoples (Opi).

Apib counted over 55,000 confirmed cases and 1,124 deaths of Indigenous people across the country as of June 24. On the same date, Sesai (Special Secretariat of Indigenous Health, linked to the federal government) had recorded more than 50,000 cases and 728 deaths.

Coiab has been monitoring cases since March 19, 2020, when the death of a Borari Indigenous woman in Pará state was recorded. Sesai, however, considers the death of a 15-year-old Yanomami boy on April 9, 2020 in Roraima to be the first death of an Indigenous person linked to Covid-19 in Brazil. The two cases were in northern Brazil.

Aruká died of acute respiratory failure due to infection with the new coronavirus in a field hospital in Porto Velho, the capital of Rondônia state, which borders Amazonas state. The transfer to another state, and not to the capital of Amazonas, Manaus, was due to the distance between the two areas, and the region's geographical characteristics.

Before his transfer to an ICU bed, Aruká Juma received in January what is referred to in Brazil as “early treatment” against Covid-19 in a hospital in Humaitá, Amazonas.

The medicines, which include ivermectin and azithromycin, promoted by President Jair Bolsonaro's government, are considered ineffective against the disease by the World Health Organization (WHO).

The medication prescribed to Aruká, who had hypertension, was disclosed to Amazônia Real by the Agency of Indigenous Healthcare (Casai) in Humaitá (AM), an agency of the Health Ministry.

Aruká's family members are considered to be the last survivors of the Juma people, an ethnic group from the Tupi Kagwahiva linguistic group, which also includes other peoples such as the Uru-Eu-Wau-Wau, with whom Aruká's daughters married to avoid the people's extinction.

In his youth, Aruká witnessed the worst massacre his people suffered when they defended their territory from an invasion by rubber tappers and nut traders in the 1960s. The first accounts of the Juma, from the 18th century, indicated that the people numbered around 15,000.

After successive massacres, they were reduced to 100 by the 1940s. From the 1960s, with new attacks by invaders, they were gradually reduced to near extinction. At the end of the 1990s, the leader managed to obtain the official demarcation of the territory located in Canutama town, in southern Amazonas.

Aruká Juma showed symptoms of Covid-19 together with 12 other family members who lived with him in the Indigenous territory in early January. On January 17, he was taken to Sentinela Hospital in Humaitá, a town near Canutama, and was then hospitalized and discharged several times.

On February 2, Aruká Juma’s condition worsened. He was put on a respirator, and had to be transferred because the hospital he was in — the second hospital he was admitted to — did not have an Intensive Care Unit (ICU) bed. A group of public institutions and organizations defending Indigenous peoples was organized to save his life. However, even though he was taken to the Hospital de Campanha in Porto Velho, he died.

Throughout the entire period of his hospitalizations in January and February, Amazônia Real requested medical reports on Aruká Juma's health condition and information on what medication he was receiving.

A professional from Casai Humaitá, an agency of the Special Secretariat for Indigenous Health, told this reporter by WhatsApp that the Indigenous leader received medicines such as azithromycin, ivermectin, and chloroquine in Sentinela Hospital, in Humaitá.

When contacted, the advisor to the Health Ministry's Indigenous District Council, Aurélio Tenharim, said that when he was infected by the virus and had Covid-19, he also received the “early treatment,” which confirmed the prescription of these medicines, including to the Juma elder. “The same medicine I took, he took too. The doctor prescribed that [early treatment],” he said.

Aruká Juma's daughters, Borehá, Maitá, and Mandeí said they had not been informed about the administration of the treatment, which has no proven scientific efficacy, to their father.

On January 11, the then Health Minister, General Eduardo Pazuello, who left the post in March, was in Manaus and publicly recommended the “early treatment” at the launch of the Strategic Plan for Fighting Covid-19 in Amazonas.

Amazonas faced the collapse of its health system with a lack of ICU beds and oxygen in hospitals.

“We are not discussing if this or that professional agrees anymore. The federal and regional health authorities have already taken a position. The councils are in favor of the early treatment, of clinical diagnosis. I talked personally, by video, with all of them,” he said at the time.

Pazuello was investigated by the Federal Supreme Court (STF) for alleged negligence in the health crisis in Amazonas, and the issue of recommending treatment without proven effectiveness is one of those being examined by the Senate’s Parliamentary Commission of Inquiry, which is analyzing the handling of the pandemic by Bolsonaro’s government.

Amazônia Real tried to contact Humaitá’ s Municipal Health Secretariat, responsible for Sentinela Hospital, and the Special Secretariat for Indigenous Health, part of the Health Ministry, to ask them for comment on the “early treatment” prescribed to Aruká Juma, but received no reply.

Sesai issued a message of condolence through the Indigenous Special Health Department (Dsei) of Porto Velho. “The Dsei took all possible steps to attend to the patient and continues to provide assistance to the family. (…) Sesai and the Porto Velho Dsei express their deepest regret at the death of this great warrior and chief,” said the text.

Historian Ivaneide Bandeira Cardozo, of the Kanindé organization, an ally of the Uru-Eu-Wau-Wau and Juma, said that the health situation is critical for Amazonian Indigenous peoples.

She learned of Aruká Juma's death while she was assisting the vaccination against Covid-19 of the Uru-Eu-Wau-Wau people in Rondônia.

“You need to understand the health situation that the Indigenous people of Brazil and the Amazon are facing, of intense pressure, extensive invasion of their lands, and healthcare that is precarious,” she said.

Funeral of a Juma warrior

Aruká's funeral took place on February 18, in the Juma village of Canutama in southern Amazonas. Various leaders were invited to pay homage to the leader on a bridge, before the funeral procession headed for the Juma’s indigenous territory.

Mandeí Juma, one of his daughters, told the reporter that all the warrior’s adornments and accessories would be buried with him.

The leader's eldest daughter, Borehá Juma, said that from now on she intends to follow in her father's footsteps: “I want to become like him now to fight like my father. My father was a real warrior. He was a chief, I was a chief and now the lineage is finished,” she said.

According to their patrilineal system, their grandchildren and their children became Uru-Eu as well. Aruká was the last man of his people.